faced resistance over plans to require vaccinations in certain venues to stem the fast spread of the Covid-19 Omicron variant, as dozens of lawmakers from his own Conservative Party voted against the measure Tuesday.

Despite the rebellion of around 100 Conservative lawmakers, so-called vaccine passports will come into force Wednesday in England after the opposition Labour Party backed the measure. Voting in favor were 369 lawmakers, with 126 voting against.

The unexpectedly large revolt spoke to the unease among some Conservative Party lawmakers about the new rules, which will require proof of vaccination or a negative test for people to access nightclubs and other large venues. It also underscores growing unrest over Mr. Johnson’s leadership, after his party slumped in the polls following a series of scandals.

This week, British authorities estimated that infections caused by Omicron are at about 200,000 a day in the U.K. and are doubling roughly every two to three days. Data on Tuesday night showed that Omicron is now the dominant Covid-19 variant in London and accounts for 5,346 confirmed Covid-19 cases across the U.K.

A growing number of studies indicate Omicron is more resistant to current vaccines than previous Covid variants, though boosters seem to help. WSJ’s Daniela Hernandez gets an exclusive look inside a lab testing how antibodies interact with Omicron. Photo illustration: Tom Grillo

In response, Mr. Johnson said people should work from home, among other measures including wearing face masks in certain venues. He is now betting that a rapid-fire booster vaccination drive will keep the virus under control and restrictions to a minimum.

The government plans to offer a shot to every adult in the country by year’s end, a goal that would require administering the vaccine to roughly one million Britons a day. However, the government’s online vaccine-booking system was overwhelmed and repeatedly crashed Monday. The National Health Service’s previous record for daily vaccinations was 756,000 in March.

“To hit the pace we need, we’ll need to match the NHS’s best vaccination day yet—and then beat it day after day,” Mr. Johnson said in a recent address to the nation.

Commuters on London’s Underground system, where it is mandatory to wear a mask.


Omicron’s spread in the U.K. resurfaces a familiar conundrum for Mr. Johnson as he weighs the necessity of rapid public intervention against his desire to keep the country as open as possible. In previous waves of the pandemic, Mr. Johnson has held off longer than European leaders before imposing restrictions.

Tuesday night’s rebellion points to the challenge Mr. Johnson faces if he has to further tighten restrictions. Some Conservative lawmakers say they want parliament recalled from its Christmas recess to scrutinize any new restrictions if they are introduced.

“He is so concerned now with not doing anything that might see him accused of closing down the economy, he is actually preventing himself from using some pretty obvious tools in the toolbox, especially in terms of social distancing,” says

professor of politics at Queen Mary, University of London.

A spokesman for the British government said the current response was a “proportionate and balanced approach” while the government awaited more scientific evidence about the variant.

Unlike in previous Covid waves, Mr. Johnson is coming into the latest one politically hobbled. Until a couple of months ago, he was comfortably ahead of Labour in the polls and dominant over his own party after securing a large majority in a 2019 election and presiding over a rapid vaccine rollout earlier this year.

The source of disquiet is mainly internal politicking. In November, Mr. Johnson blocked the suspension of a fellow Conservative lawmaker who was found to have broken parliamentary lobbying rules. Following an outcry in Parliament, the government subsequently reversed that decision, and the lawmaker quit. 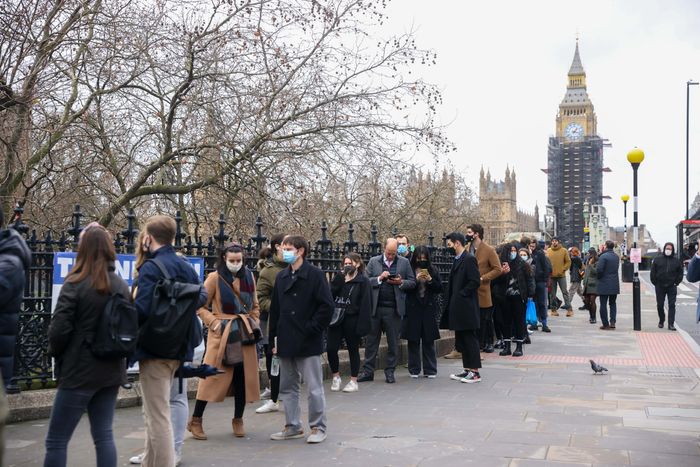 Visitors waited in line for Covid-19 vaccinations at St. Thomas’s Hospital in London on Monday.

Separately, an internal probe is under way into whether staff in Downing Street broke lockdown rules last Christmas by allegedly holding several parties. Over the weekend, an image was published in local media of Mr. Johnson on a video call last year sitting next to two aides—one of whom is wearing tinsel round his neck—reading out quiz questions. Mr. Johnson denies breaking any rules. The probe’s findings are due to be published this week.

Mr. Johnson’s personal rating has fallen to record lows. Currently, 66% of Britons have an unfavorable opinion of him, according to pollster YouGov. 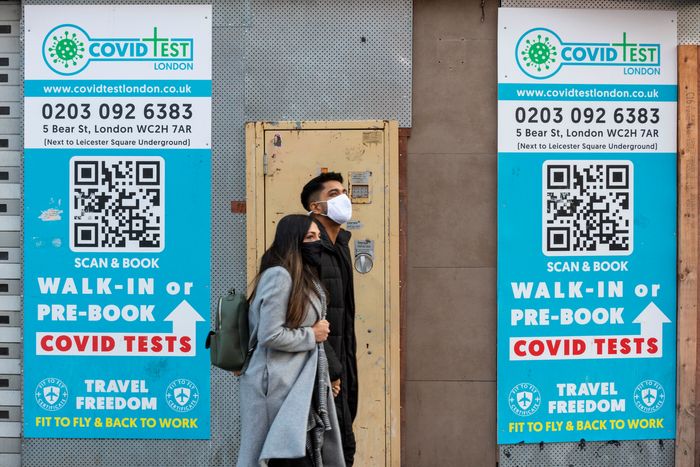 Stricter measures to try to curb the speed of the spread of the Omicron variant have been introduced in the U.K. in recent days.

Following his election victory in 2019 Mr. Johnson has a working majority of 85 in the House of Commons. The rebellion of around 100 lawmakers means that he was reliant on opposition Labour Party support to put in place vaccine certificates.

The midterm slump in the polls is a warning sign for a leader who is backed by his lawmakers largely because of his ability to win elections, pollsters say. “The question is whether it is a blip or a trend,” says Robert Hayward, a Conservative member of the House of Lords and pollster. “We won’t know until mid to late January.”

Officials and some lawmakers in the ruling party say Mr. Johnson isn’t in any imminent political danger. Still, Conservative lawmakers are nervously eyeing a tightly contested vote Thursday in the district of North Shropshire, worried that a loss might reflect a turn by the electorate against their leader.

Omicron is likely to pull the public’s gaze away from Westminster and provide Mr. Johnson with some respite following weeks of negative headlines, says Mr. Hayward. The British military is being dispatched to help manage the booster-vaccine campaign, which now includes 3,000 vaccination centers across the U.K. A recruitment drive is under way to find volunteers to administer injections. Currently 41% of Britons aged 12 or over have had boosters.

“People will now be focused on their health and their families,” says Mr. Hayward.