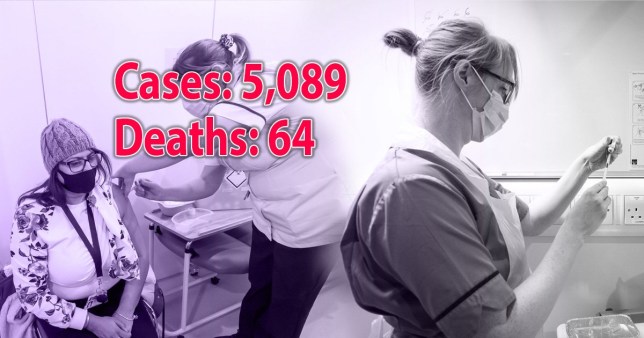 Death and case rates in the UK are in decline as the vaccine rollout continues at pace (Picture: PA)

Another 64 people have died with coronavirus in the UK, while a further 5,089 new cases have also been confirmed.

Monday’s relatively low figures mean that the country has now reported a total of 125,580 deaths and 4,263,527 infections.

The reported figures do tend to be significantly lower than much of the rest of the week of Mondays due to a lag in reporting, but the official data is noticeably down on previous weeks as England emerges out of lockdown.

It comes amid concerns on the continent around the safety of the Oxford vaccine, which the UK insists is safe as the rapid rollout of jabs continues.

Earlier today, NHS England confirmed that a further 76 people who tested positive for coronavirus have died in the country’s hospitals, bringing the total number of confirmed deaths reported in the setting to 85,310.

Patients were aged between 47 and 102 and all except one, aged 91, had known underlying health conditions.

The deaths were between December 11 and March 14, with the majority being on or after March 11. 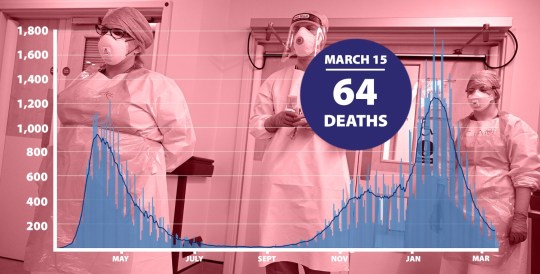 The number of deaths tends to be lower on Mondays than other weekdays (Picture: Getty)

There were three other deaths reported with no positive Covid-19 test result.

Meanwhile, just over 250,000 first doses 25,000 second doses of vaccines were recorded in the last 24 hour period – a significant fall on previous days.

The government have warned that supply will not be consistent but should pick up in the coming days.

Nearly 24.5 million people have now had a first jab in the UK while more than 1.6 million have also had a second dose. 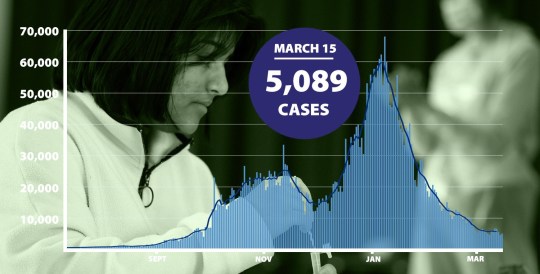 Reported daily cases appear to be levelling off at around 5,000 (Picture: PA)

Scotland has recorded 456 new Covid-19 cases in the past 24 hours, meaning 210,008 people have now tested positive in the country.

No new deaths were recorded there, meaning the death toll of those who first tested positive for the virus within the previous 28 days remains at 7,510.

In Wales, a further 248 cases of have been recorded, taking the total number of confirmed cases to 206,653.

Public Health Wales recorded two further deaths, taking the total in the country since the start of the pandemic to 5,454.

It brings the respective totals there since the pandemic began to 2,099 deaths and 115,017 cases.

Meanwhile, surge testing is being rolled out to three more postcodes after the South African variant was discovered in London.

In other Covid developments, Portugal is expected to be removed from the UK’s red list that forces arrivals to quarantine in hotels at their own expense.