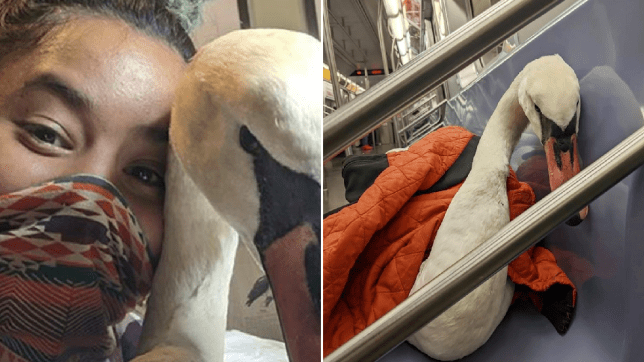 An animal care worker rescued a dying swan by bringing it on board the New York subway.

Ariel Cordova-Rojas was at the Jamaica Bay Wildlife Refuge in Queens, New York on Thursday when she noticed a swan that looked sick, the New York Times first reported.

Cordova-Rojas, who spent five years as an animal care manager at a bird rehabilitation center, was able to spot that the animal was sitting alone near the water’s edge.

When Cordova-Rojas approached the swan, it did not move or make a sound. It is a mute swan, and she said they are usually territorial and aggressive.

Cordova-Rojas said ‘there was obviously something wrong’ with the swan.

She took off her jacket and wrapped it around the animal to transport it away from the water, carrying the 17 pound swan a mile away to safety. 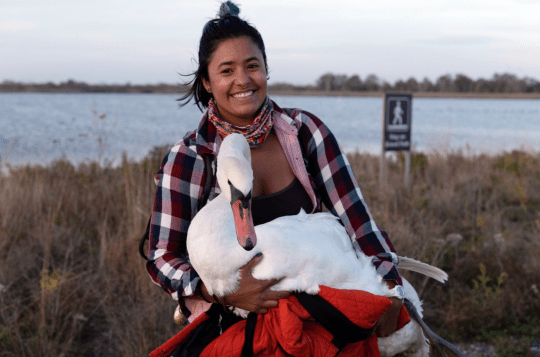 After no animal control centers responded to her calls, Cordova-Rojas was helped in the form of a husband and wife who offered to drive her and the swan to subway.

Still, they were not able to fit the swan in the car, so the couple called a friend, who was then able to bring Cordova-Rojas and the swan to the train station.

‘There’s a few people on the train and nobody seems to be fazed,’ Cordova-Rojas said.

They finally reached the Wild Bird Fund in Central Park, where Cordova-Rojas had previously worked. The staff said the swan was underweight and was suffering from lead poisoning.

The facility put the swan through some treatment and would reassess the animal in a few weeks.

The next day was Cordova-Rojas’ 30th birthday, and she said she was happy to celebrate by helping a swan.

‘If there’s an animal in need, I’m going to do whatever I can,’ she said.