The state authorities said that the hospital staff assess the patients waiting in ambulances as per their medical condition before deciding the order of treatment, adding that stabilising critically ill patients is the top priority of doctors 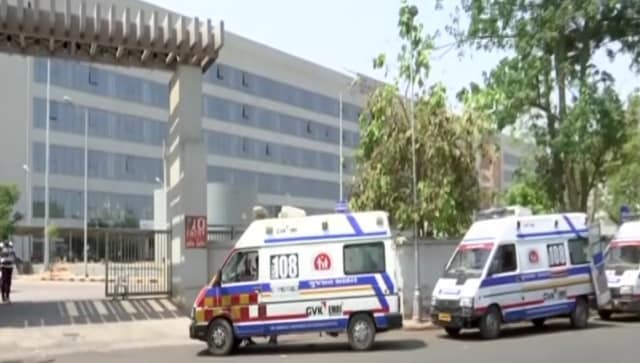 Ambulances queued up outside the Ahmedabad Civic Hospital. ANI

patients seen outside the civil hospital here, saying the admission of patients is being carried out as per the protocols which just cannot be discarded.
The government said it was unfair to associate the queue with the efficiency of the civil hospital in handling the situation.

The civil hospital campus in Asarva area of the city houses a dedicated 1,200-bed hospital for COVID-19

Since the last week, a long queue of ambulances carrying coronavirus

positive patients has been seen outside the hospital building.

During a hearing on the overall pandemic situation in the state, the Gujarat High Court recently observed that “over 40 ambulances were found queued up outside the civil hospital”.

The HC had cited media reports claiming that COVID-19

patients are queuing up in ambulances as beds are not available in any hospitals.

In its reply, the government had told the HC that the queue of ambulances is not a criterion to judge the efficiency of the civil hospital.

patients waiting in ambulances are admitted to the hospital as per the protocol which cannot be set aside, it said.

“The civil hospital is trying its best to save every patient. There is no relation between the queue and the efficiency of the civil hospital. We cannot bypass the set protocols just because there is a queue of ambulances,” an official release quoted civil hospital superintendent Dr J V Modi as saying.

He said the staff of the hospital assess the patients waiting in ambulances as per their medical condition before deciding the order of treatment.

“Those patients who need medical oxygen cannot be shifted to ordinary beds directly from ambulances. That decision could prove fatal for such patients. Such serious patients need to be shifted to the ICU,” Modi said.

He said the admission priority for patients is decided as per their level of emergency in state-run hospitals.

“Thus, critical patients are given the priority, followed by those requiring admission in ICU and then those who require only oxygen support” explained Modi.

He said stabilising the patients who are critically ill is the top priority of doctors at civil hospitals.

“Once a patient is admitted to the ICU of the hospital, he/she has to be kept there for at least seven days. There are set protocols about the line of treatment which cannot be just discarded,” he added.