Testifying in his own defense, Travis McMichael opened the door for prosecutors to question any racial biases they believe he may have (Picture: Getty Images)

The man who fatally shot Ahmaud Arbery returned to the witness stand Thursday after testifying that the 25-year-old black man prompted him to make a split-second ‘life or death’ decision by coming at him and grabbing his gun.

Testifying in his own defense, Travis opened the door to questioning by prosecutors who have said they might ask him about evidence that he had ‘racial animus’ against black people.

Travis also acknowledged that Arbery didn’t pull out a weapon or threaten him in any way and indicated several times that he didn’t want to talk to him.

Travis McMichael became teary-eyed when he first took the stand on Wednesday, looking to tell his ‘side of the story’ (Picture: 11 Alive)

Prosecutors then asked Travis about his time in the Coast Guard, confirming that he learned there that ‘you can’t force people to talk to you’.

Travis also spoke of how drawing a weapon can sometimes deescalate a situation, saying, ‘If you pull a weapon on someone, from what I’ve learned in my training, usually that caused people to back off or to realize what’s happening’ and comply with orders.

When Travis first took the stand on Wednesday, he became teary-eyed, looking to tell the court his ‘side of the story’.

‘I was thinking of my son,’ Travis said, recounting the moments leading up to when he pulled the trigger. ‘It sounds weird, but that’s the first thing that hit me.’ 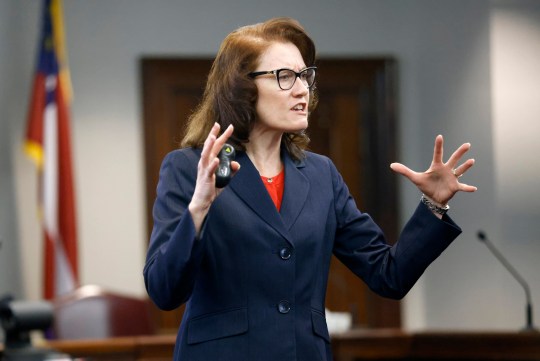 Travis is the first to testify of the three white men charged with murder in Arbery’s death.

Now Travis faces intense questioning by prosecutors, who maintain there was no justification for him and his father Greg McMichael to arm themselves and chase Arbery when he ran past their Georgia home in February 2020.

Travis told the court that he was home with his son and mother on February 23, 2020 when his father walked into the house and told him a man they suspected of breaking into their neighbor’s home had just run past.

Travis then jumped into a pickup truck with his father, Greg, to pursue Arbery. Both armed themselves, and Travis said he assumed his father had called the police before they began chasing Arbery. 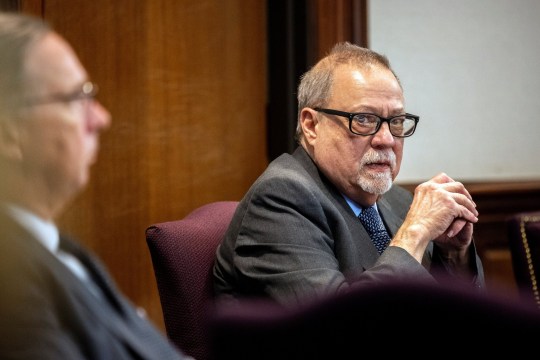 Greg McMichael and his son hopped in their pickup truck to pursue Ahmaud Arbery, who was on a run in their neighborhood (Picture: Reuters)

‘I’m trying to keep this as non-volatile as possible. I’m not screaming at the guy. I’m just trying to figure out what’s happening,’ Travis said. ‘At this point he’s still running, but I notice he looks very angry.’

A neighbor, William ‘Roddie’ Bryan, soon joined the chase in his own truck and recorded the tragic events on his cell phone.

At one point, Travis told Arbery the police were coming, because he believed his father had called 911, causing him to run off. Travis parked the truck he and his father were pursing him in, and saw Arbery running toward them.

Worried Arbery was going to harm his father, Travis exited the truck and ran toward Arbery and the two began to fight. 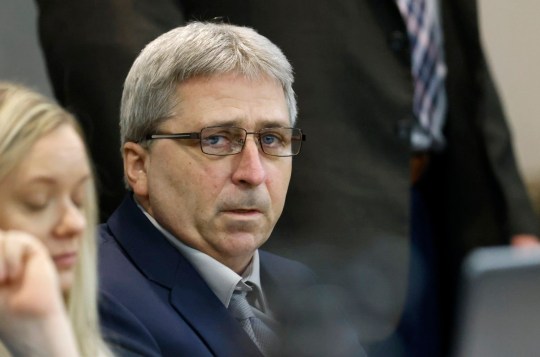 ‘He had my gun. He struck me,’ Travis said. ‘It was obvious that he was attacking me, that if he would’ve got the shotgun from me, then it was a life or death situation. And I’m gonna have to stop him from doing this, so I shot.’

Travis said he felt Arbery was overpowering him and that he had to use lethal force. He told prosecutors his intention that day was to help police identify a man breaking into a neighbor’s house, but when asked if his dad said he’d seen Arbery breaking into the house, he said ‘no’.

Prosecutors argue that the men chased Arbery for five minutes and used their trucks to prevent him from fleeing their neighborhood before Travis shot him.

Defense attorneys argued that Greg and Travis were trying to make a citizen’s arrest and that Travis shot Arbery in self-defense. An attorney for Roddie has said he was only a witness to the crime. 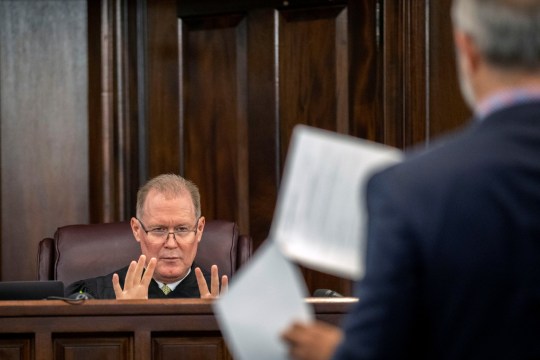 The same attorney, Kevin Gough, took issue with Jesse Jackson, the Reverend Al Sharpton and others who have sat with Arbery’s family in court, and called for their removal.

‘We don’t want any more black pastors coming in here… sitting with the victim’s family, trying to influence the jurors in this case,’ Gough said last week.

Still, the statement has caused agony in the Georgia community, and is especially offensive because pastors play an important role in comforting people who are hurting and demanding justice, said John Perry, a pastor and the former leader of Brunswick’s chapter of the NAACP. 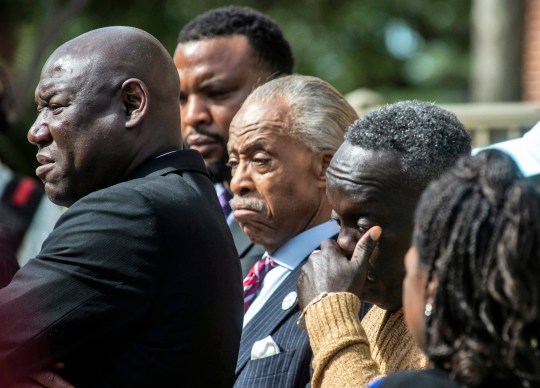 ‘I believe we’re seeing overwhelming evidence that points us toward guilt, and so there’s been an attempt to take the focus off the evidence,’ Perry said.

On Thursday, more than 100 faith leaders planned to gather in Brunswick, Georgia to hold a prayer rally in support of Arbery’s family.

Arbery’s mother Wanda Cooper-Jones told News4Jax she was grateful for the support.

‘My family and I are very grateful that these pastors are coming in to offer support because support is what we need,’ she said.

Despite security cameras catching Arbery at the unfinished house on their street, prosecutors say there’s no evidence he committed any crimes.