As a widow who has raised her children alone, Pak Pov has seen firsthand the devastation climate change can cause to families.

Although she earns her living as a farmer, the village chief also works in a salt field to make ends meet.

However, unpredictable and heavy rain have made salt production very hard over the last few years and left Pak Pov and her family feeling the strain, as none of the workers are making any money.

‘Whenever natural disasters occur, there are many negative impacts on women and children,’ says Pak Pov. ‘For example, when the flood comes in, it is very difficult for pregnant women to travel, women lose their jobs and children are not able to go to school.’

Sadly Pak Pov’s story isn’t unique and in Cambodia, where she lives, climate change is not a problem reserved for the next generation.

Rising sea levels, unpredictable seasons and erratic rainfall have all contributed to create extremes in weather, from intense storms and floods to fatal droughts.

Meanwhile, millions of lives and livelihoods have also been left in danger as much of the country’s land is a floodplain within the basin of the Mekong River. During the monsoon season, as rivers overflow, the country experiences flooding, which has been made much worse due to adverse weather conditions brought about by environmental change. 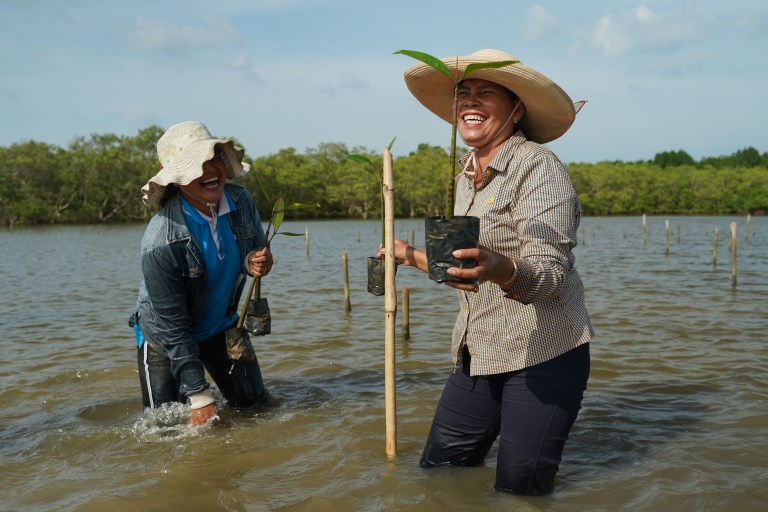 ‘Whenever natural disasters occur, there are many negative impacts on women and children,’ says Pak Pov (Picture: Cindy Liu/ActionAid)

The impact is devastating. Depleted fish stocks and crop failures push families who rely solely on fishing and farming for food and income deeper into poverty.

While this is an undoubted tragedy for everyone, it’s women and girls who truly bear the brunt when disaster strikes because they have less social, economic and political power.

Following a flood, one of the first coping strategies of families is to take girls out of school to save costs and allow them to help out at home or work.

Additionally, it is women and girls who are responsible for walking long distances to fetch fresh drinking water when it becomes unavailable. They are also more likely to be on the receiving end of domestic violence, which increases when emergencies hit.

On top of this, few women are taught vital skills such as how to swim or to climb trees, and as a result, more women and girls tend to die in disasters, too.

That’s why international charity ActionAid is calling for a change in focus through their new campaign, She Is The Answer. 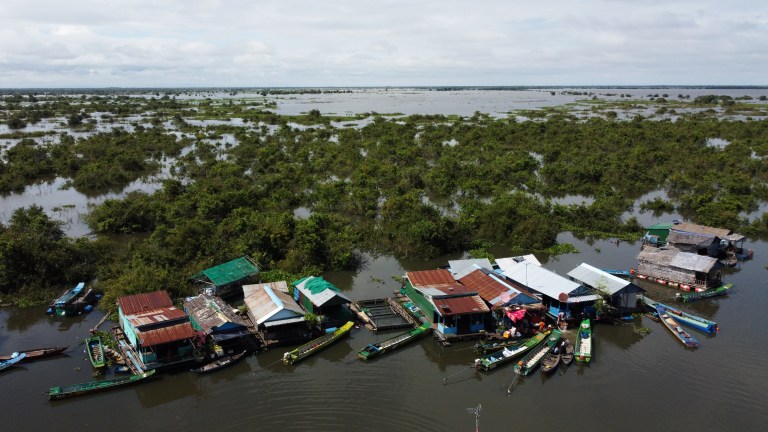 As well as highlighting the disproportionate impact girls and women are suffering due to the climate emergency, the initiative aims to empower women to have a voice in the face of climate disaster.

During the campaign, which runs for three months, all donations from the British public will be doubled by the UK Government.

Samphy Eng, is a Programme Officer at ActionAid Cambodia. ‘When disaster strikes, we know that women and girls are disproportionately impacted, yet they continue to be excluded when decisions are made,’ she explains.

‘It is so important that we challenge traditional patriarchal structures – we must champion women leaders and make sure their voices are heard so that women and girls are no longer marginalised.

‘Only then can communities truly thrive in our new world altered by climate change. The Women Champions I work with give me hope and I would love to see the network grow.’

She Is The Answer – what your donation could buy

Over the next four days, Metro.co.uk will help highlight the campaign’s work by speaking to women and girls in Cambodia about their plight – and how they are fighting to give hope to the next generation.

One of the ways ActionAid is helping them to do that is through a network of ‘Women Champions’,  by equipping them with knowledge of the current climate science and supporting them in playing an active role in decision-making.

With 46 trained so far, these women speak on behalf of their female community when vital decisions are made about tackling the climate crisis, both at local and government level. 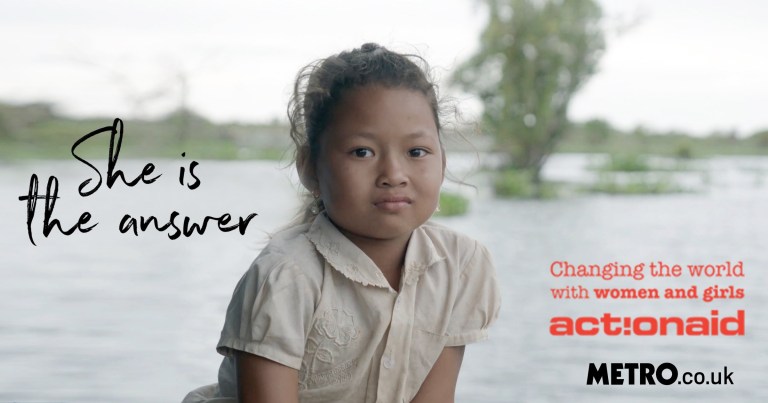 Metro.co.uk have teamed up with ActionAid to support their campaign, She Is The Answer (Picture: Metro/Cindy Liu/ActionAid)

So far, they have helped villages and farms protect themselves by setting up early warning systems, building defences and planting protective mangrove barriers.

For the children, they’ve helped create floating schools, while also spreading knowledge of sustainable farming practices and educating the next generation in new livelihoods that are less likely to be impacted by climate change.

Pak Pov has been a Woman Champion for the last three years.

In her role, she gives training sessions on farming, sharing seeds, preparing freshwater reservoirs for irrigation and replenishing local mangroves.

‘I decided to become a Women’s Champion because I thought this position was very important in my community,’ she explains. ‘I can make sure that information about the needs of women and children is passed on.’

45-year old Pak Pov says that the training she received from ActionAid even helped her to become a village chief. ‘My goal is to expand the network of women and for them to become leaders in the community,’ she explains.

Varou Mat is also a Woman Champion. She works as a nursery school assistant, while her husband is a fisherman. 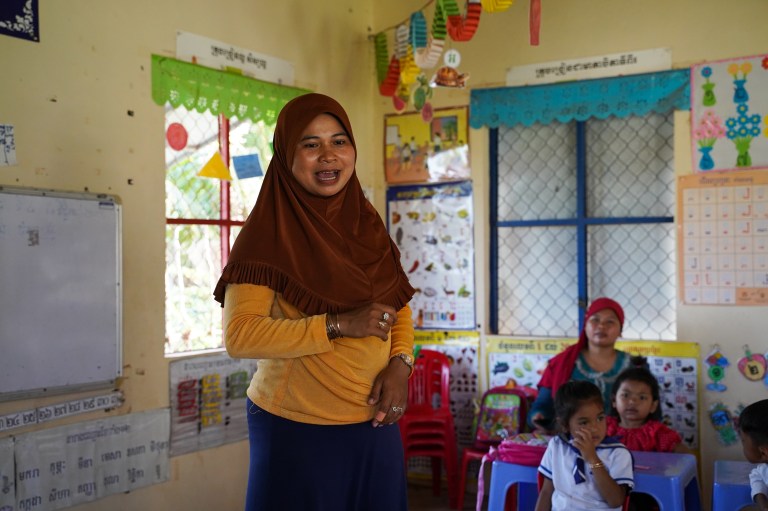 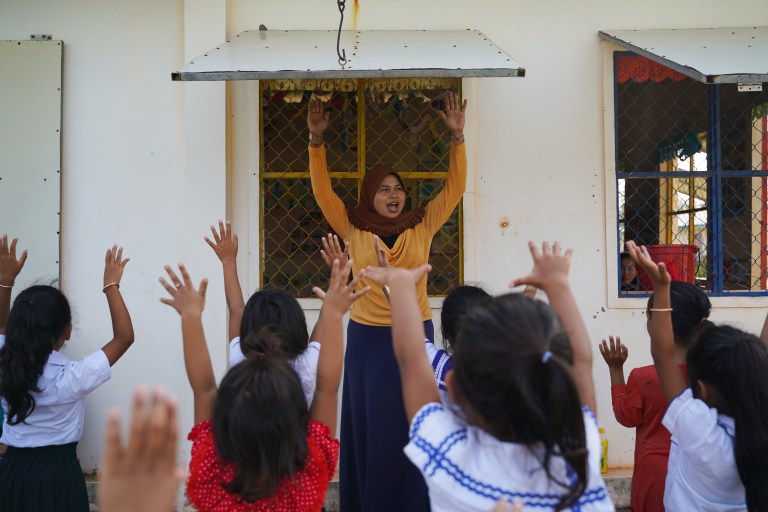 ‘When there is a storm raging, I am so worried,’ she admits. ‘I am afraid that when he comes back, we will have no money.’

Varou Mat says that many women in the community rely mainly on fishing. ‘If fishing is suspended, there’s no income or jobs,’ she explains. ‘They have no choice but to force their children to drop out of school to work in the factory to earn some money.’

Since receiving ActionAid training and becoming a Woman Champion, Varou Mat has been encouraging her fellow villagers to pursue other sources of food and income, such as growing their own vegetables and fruit trees, as well as raising chickens.

‘I explain to them the benefits, as it costs us nothing,’ she says. ‘We can use leftover rice as food for the chickens, for example.’

She continues, ‘We inform [the community] of floods and storms, as well as measures to respond and mitigate the disasters in advance.’

‘When the rainfall comes, we saw that the houses upstream were filled with rainwater without any means to drain it away,’ she explains. ‘We raised this concern to [the local authority] for an intervention.’

She says that the Women Champions network has given them a much-needed voice:

‘[They now feel] brave to speak up about their problems, their needs and what they want.’

ActionAid: She Is The Answer

ActionAid is an international charity that works with women and girls living in poverty. Their dedicated local staff are changing the world with women and girls. They are ending violence and fighting poverty so that all women, everywhere, can create the future they want.

Metro.co.uk have teamed upwith ActionAid to highlight their UK Aid Match campaign She Is The Answer, which is running from 5 March until 4 June. For every donation made by the British public, the UK Government will double it.

To find out more about how you can support this campaign and women’s leadership click here.