Plenty of vegan or accidentally vegan snacks are easily available.

Whether it’s for World Vegan Day, Veganuary or a permanent lifestyle choice – veganism has a positive impact on the planet.

But it hasn’t always been easy to get your hands on tasty vegan sweets and savoury treats.

In recent years, though, supermarkets have adopted the vegan trend – with some everyday products using ‘accidentally vegan’ recipes – as have popular coffee shops and fast food venues.

With plenty of choice, it’s now possible for vegans to enjoy sweets, biscuits, crisps, popcorn, easy meals and ‘junk food’ more easily and on the go.

Here are just a handful to look out for in the shops or when you’re next out and about.

The chewy yellow bar, by Swizzels, is vegan-friendly. But the tubed, fizzy sweets of the same (by Barratt) are not suitable for vegans, sadly. 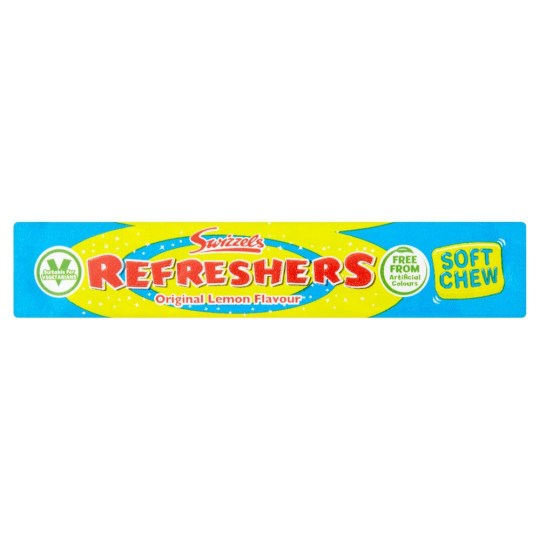 There no ingredients that contain animal products in the regular Oreo biscuit. So, technically, it should be OK for vegans.

Interestingly, the UK website points out says they’re not, due to the risk of cross-contamination with animal products.

However, some vegans find this possible close-contact with milk acceptable – as it’s not guaranteed – which is why we’ve included them here.

Be careful if you’re buying a variation on the regular Oreo, such as one covered in chocolate, as it won’t be vegan.

If something savoury is more your speed, Gregg’s vegan sausage roll is available in most of its shops.

You can also get a vegan ham and cheese sandwich, potato wedges and a glazed doughnut. A festive bake is en route, too. See the full vegan menu here.

Watching a movie? You don’t need to miss out on the popcorn experience.

This wonderfully-light snack is a great replacement for toffee or buttery popcorn, which usually contain dairy.

Best of all: this isn’t the only classic crisp flavour to be vegan. Walkers prawn cocktail, Worcester sauce and ready salted and vegan-friendly, too. 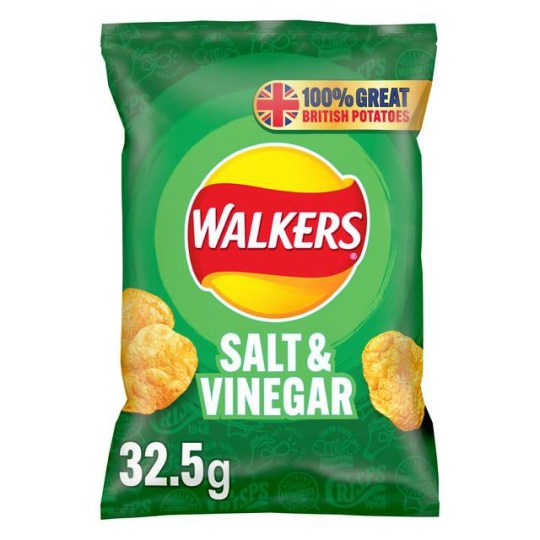 Who would’ve thought Walkers could be vegan, too?

Good news: lots of Graze snacks are vegan – from sweet treats to savoury crisps and nuts. The full list can be found here.

Who doesn’t love a Love Heart? Animal lovers and gluten-free folks certainly will.

These are another Swizzels sweet that are totally vegetarian, vegan and made without gluten.

There are no animal product in the ingredients of the Chilli Heatwave flavour of crunchy Doritos – though it’s worth noting they are made in a factory that handles milk.

The Lightly Salted flavour is also accidentally vegan – but not Cool Original nor Nacho Cheese (well, that one’s obvious).

These cinnamon-y biscuits are vegan – and so is the uber-popular spread, which can be used on toast, for baking, slathered on fruit. Whatever you like! 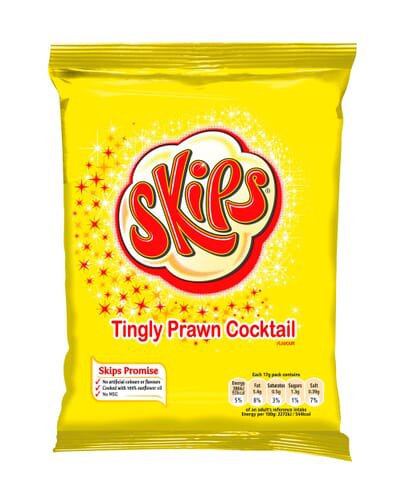 Remember Skips? The crisps of childhood, in a classic prawn cocktail flavour.

They’re totally vegan, as there’s no actual prawn used in the recipe. It’s all a tasty combination of flavourings.

As with Skips, don’t let the ‘beef’ in this Pot Noodle flavour fool you. There are no animal products in sight, just flavourings and soya pieces.

Of all the classic Pot Noodle flavours, some do contain milk – but others, like BBQ Pulled Pork, Piri Piri Chicken and Chinese Chow Mein are all suitable for vegan diets. PETA confirms.

At 429 calories a pop, this Beyond Meat burger newly added to the McDonald’s menu may be heading more into ‘meal’ territory than ‘snack’.

But when the Maccy Ds craving strikes, or you’re feeling a bit hungover and need a pick-me-up, it’s useful to know that vegans now have a handy burger option.

It’s officially certified as Vegan by The Vegan Society, too – as it’s cooked on a separate grill to the establishment’s meat products. 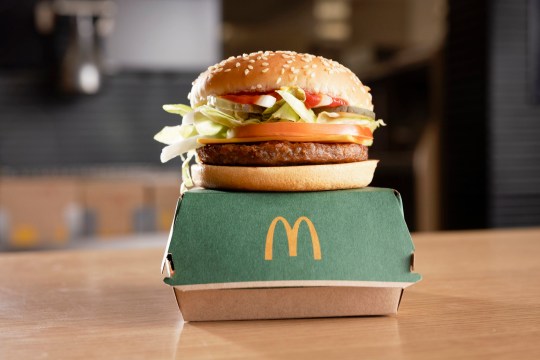 Not a fan of crisps but need a light snack? Sunbites are a happy medium, crunchy but not too greasy.

The Sun-Ripened Sweet Chilli flavour is suitable for vegans.

If you’re popping into Pret A Manger for a coffee, you can also opt for some Dark Chocolate Salted Almonds. They’re vegan!

Most of Made In Chelsea and Strictly star Jamie Laing’s Candy Kittens range is vegan friendly.

‘Our Eton Mess recipe is currently coated in beeswax, so it is not vegan but is suitable for vegetarians.’

No animal products are in these sweet, accidentally vegan, icing-coating biscuits.

And hey, they’re not just for kids parties, thank you very much.

Not only are all Nakd bars vegan, but they’re wheat, gluten and dairy free too. They’re mostly comprised of smushed fruit and nuts. 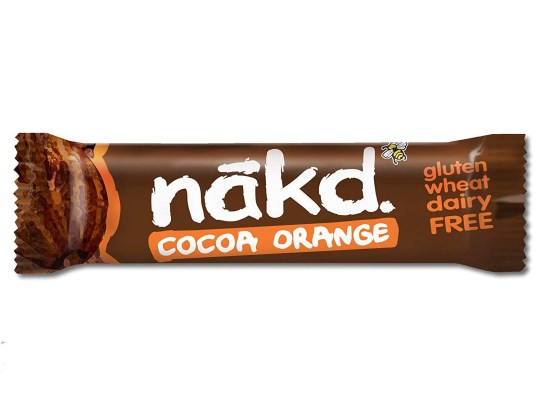 No dairy, gluten or wheat in Nakd bars.

Popular café chain Costa has started to expand its vegan menu, which can be explored in full here.

If you’ve skipped breakfast and are in need of a bite to eat, they now do a vegan version of a bacon sandwich.

Unbelievably, these flavourful, thick-cut crinkled crisps are vegan. A few flavours, including salt and vinegar, are animal product-free.

This one’s not set in stone, but Fry’s Chocolate Cream bars, along with Orange Cream and Peppermint Cream bars, are often touted as ‘accidentally vegan’.

They don’t contain milk, but they’re ‘not suitable for milk allergy sufferers’ – meaning cross contamination is a possibility. Ultimately, it’s up to you decide. 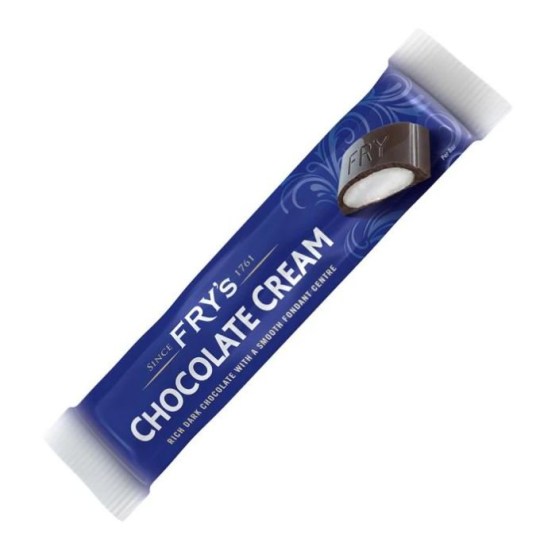 Not all of these snacks are official certified as vegan by The Vegan Society.

This might be because of how they’re made, or a small risk of cross-contamination with an animal-derived product in the manufacturing process.

So, it’s really important that every vegan makes a judgement call about what they will and won’t eat. Study the backs of packets carefully, and decide for yourself.

It’s also worth noting that manufacturers can change their recipes unexpectedly – so what might be vegan today, may contain honey or milk or another animal product tomorrow.

Again, check out the ingredients on the packaging before you buy – and ensure what you’re eating and spending your hard-earned cash on aligns with your values and dietary needs.