Most people go through the same major milestones in life, like getting married, having children, and, of course, getting their very own place to live in.

We’ll focus on the latter for today’s topic, as there’s a Reddit story by a young lady who, together with her partner, decided to buy a house, but due to some financial disagreements, have run into an ‘am I the a-hole?’ situation that was presented online for the internet’s judgement.

A 22-year-old anonymous user on Reddit has turned to the r/AmITheA-hole community for some help figuring out if she was wrong for not wanting her boyfriend’s name to be on the house she’s buying because of his minimal financial input into it.

Context time: the woman has been together with her 25-year-old boyfriend for about 4 years now, 2 of which were spent living together in an apartment. Since OP has now landed a $80K-a-year job, she’s been wanting to get her own place, a house in particular. 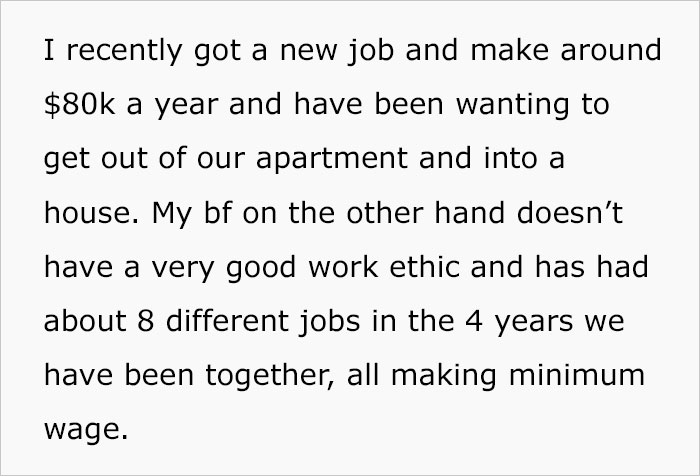 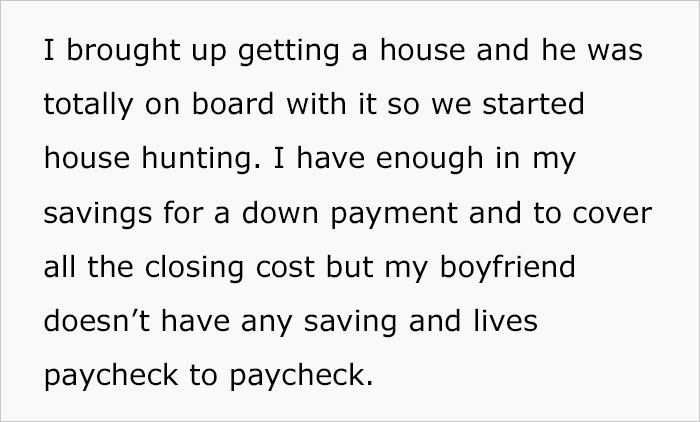 The boyfriend, on the other hand, is as she said “not of a good work ethic,” having changed jobs 8 times throughout their relationship, all providing minimum wage, but he was still on board.

The two ended up finding a house, and decided that they would be looking for a house with a price range small enough that OP could pay for it alone, and the guy’s earnings would be used as extra cash. They would split the mortgage equally, but she’d pay utilities, insurance, and other related expenses. 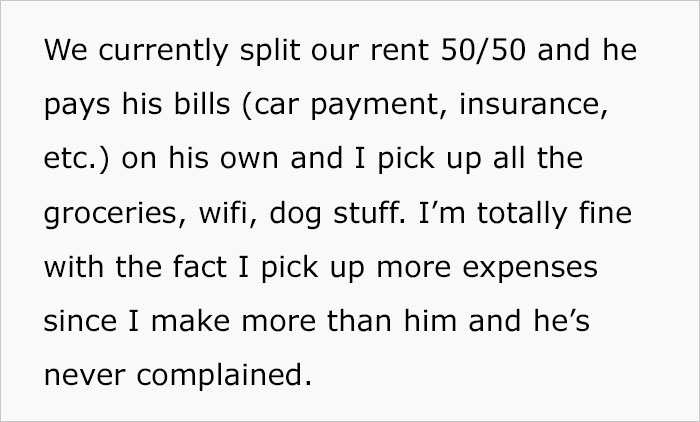 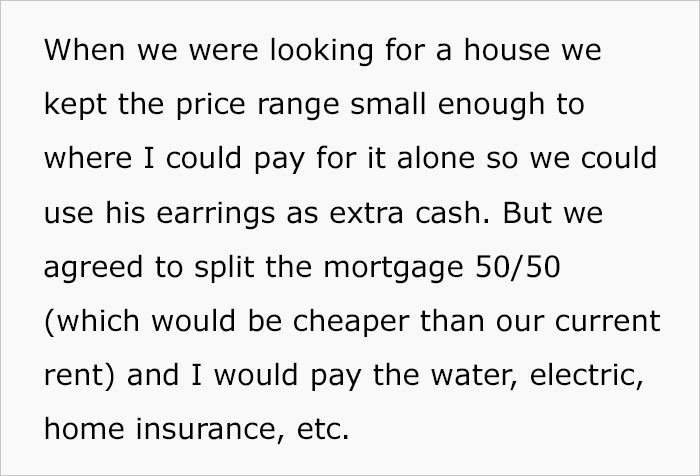 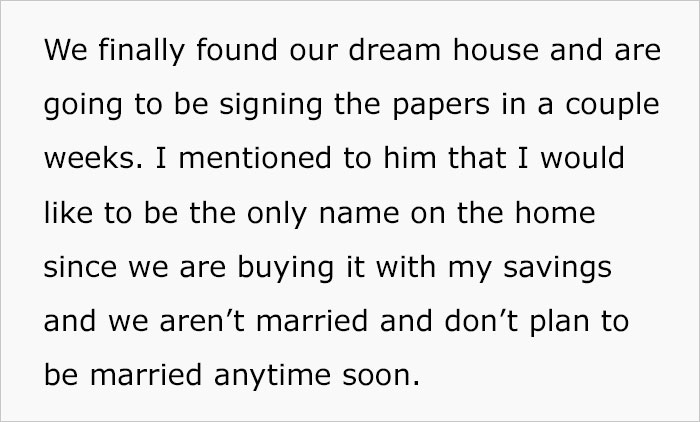 However, all was fine and dandy until the woman asked to only have her name on the house as she’s effectively buying it with her savings, and they aren’t married (and don’t plan on it for the time being).

This did not go well with the boyfriend as he got upset—it was supposed to be “their” house, and the woman claimed it would be, but not legally, as she’s just not willing to put $400,000 on the line.

His response was that if it’s going to be her house, then he shouldn’t have to pay to live there, with which OP disagreed. 3 days passed and the two aren’t talking, and the woman doesn’t think she’s wrong here, so she passed the question onto Reddit. 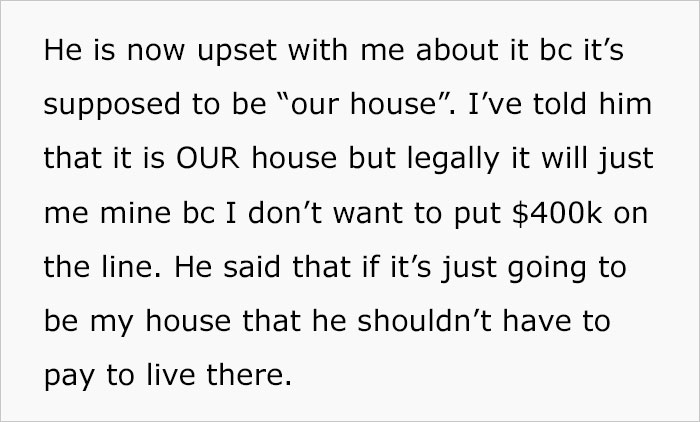 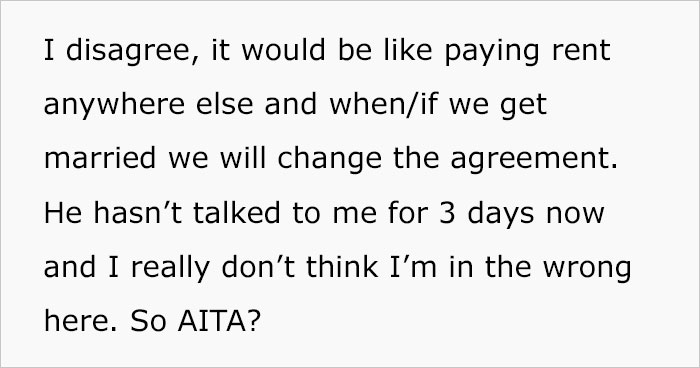 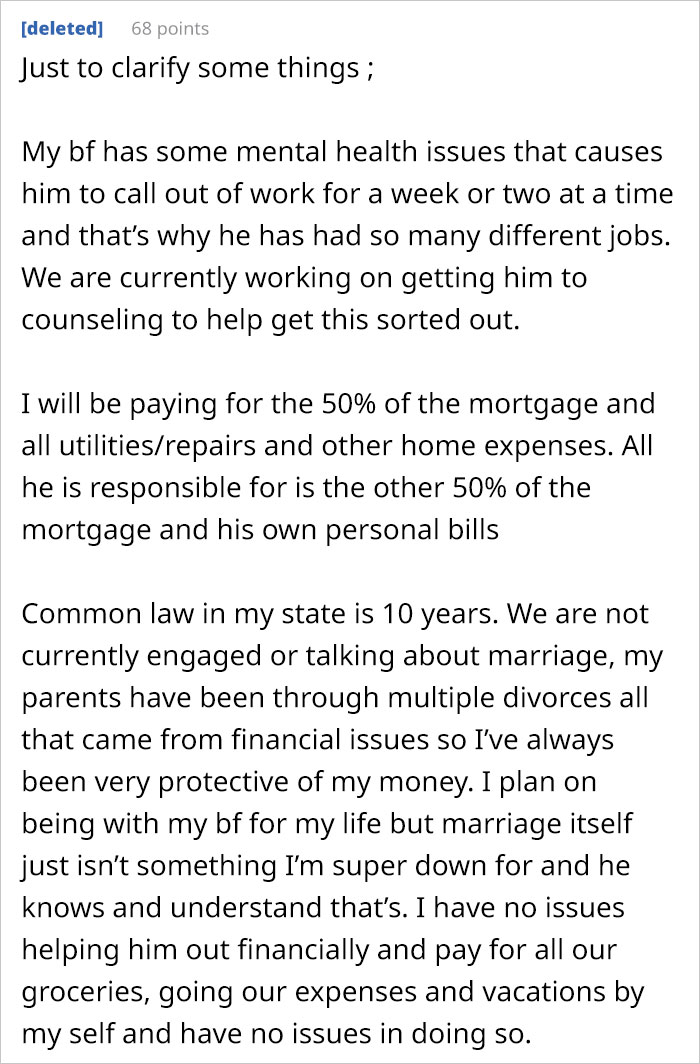 For the most part, everyone ruled that she’s not wrong. For some, the argument was that it’s her money, so her house, and if the two were to break up, then they’d be forced to split the house, and that would mean selling it. And, of course, there were some pointing out the red flag in this relationship, providing appropriate advice.

But not everyone agreed with the verdict. There were people who said that everyone is at fault here and it’s something the couple should have had a conversation about long before starting a house hunt, and did not discuss their expectations, where communication is key.

For the most part, everyone supported here, but there were some who gave a different opinion 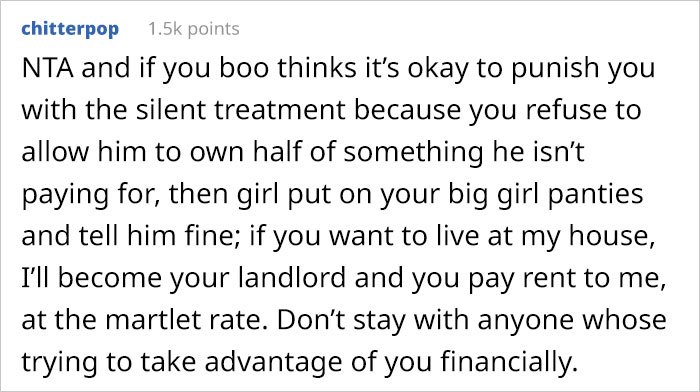 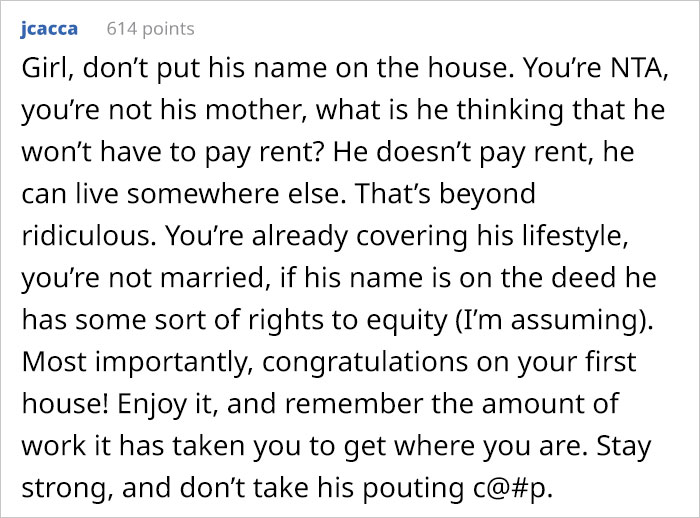 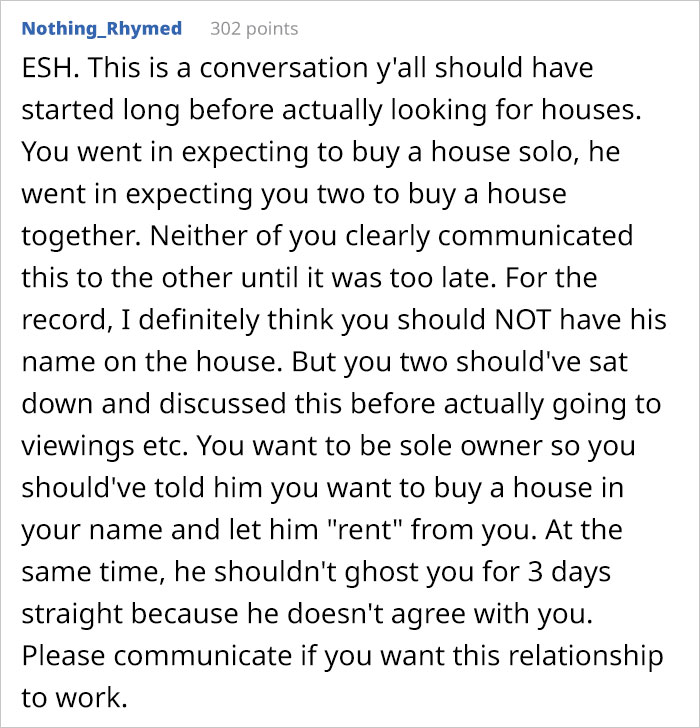 Another user also did the math and ruled she was actually wrong as she’s making four times more than the guy, but expects him to pay half the mortgage on a $400K house. If anything, that is a lot considering his income.

While the post’s stats are quite modest, having garnered nearly 10,000 upvotes with a handful of Reddit awards, it has encouraged over 2,300 comments for the discussion, so there’s that. 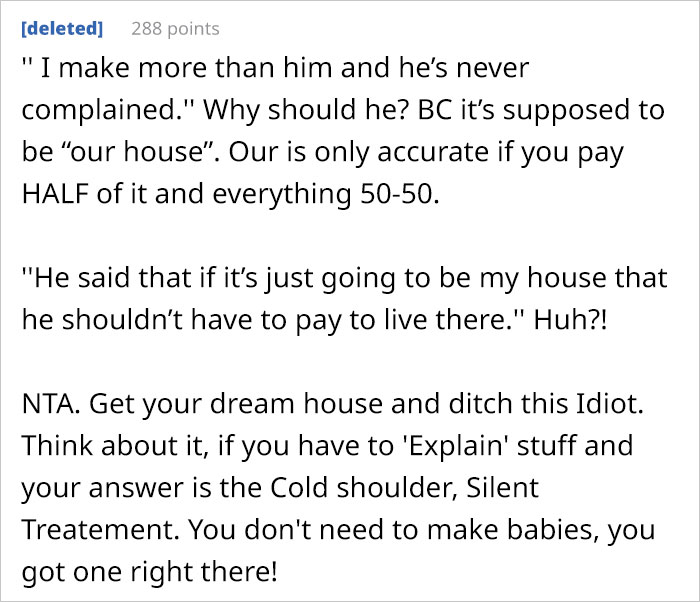 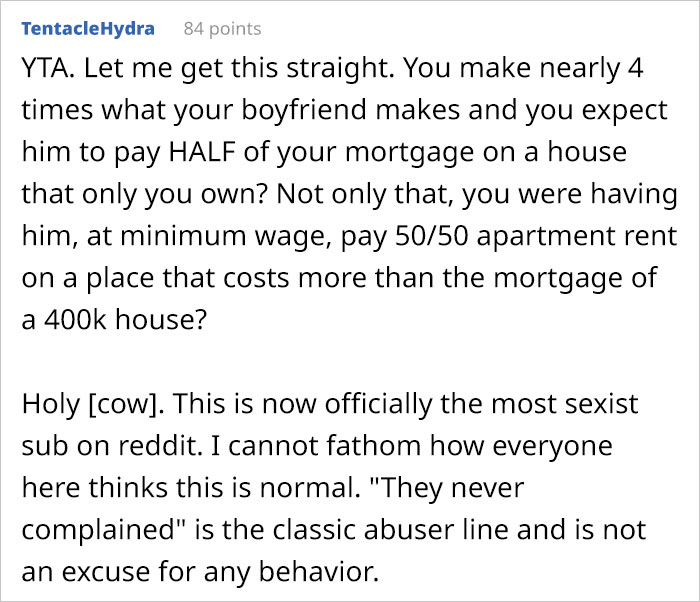 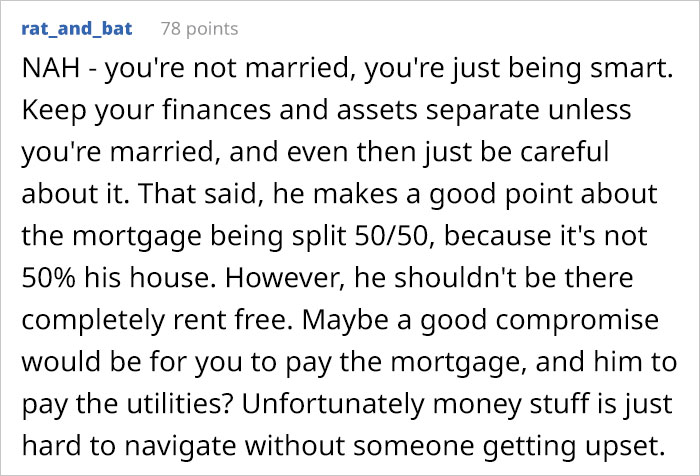 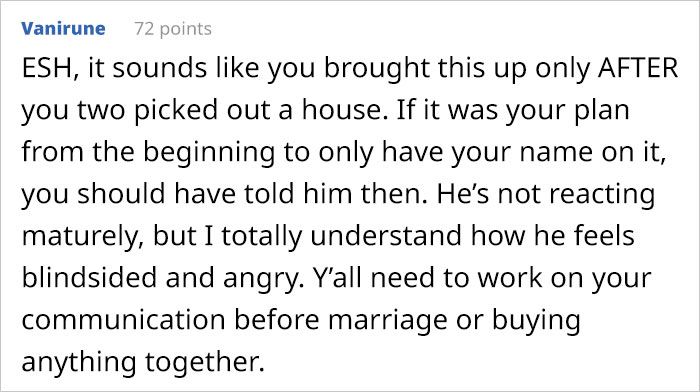 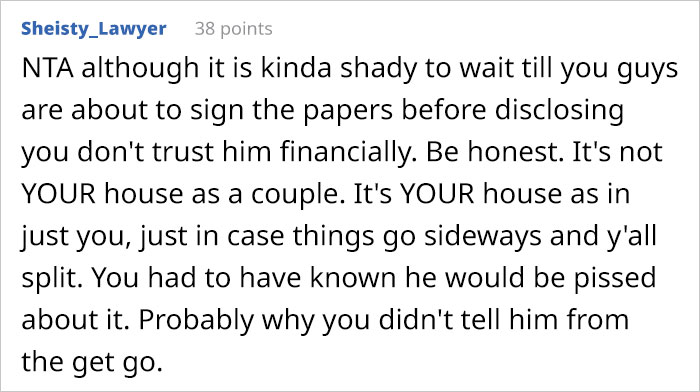 You can check out the full post, as well as all of the people’s comments here, and also check out other articles we’re done on the subreddit here. But before you scurry away, let us know who was wrong here, and how you would have solved the issue in the comments below!