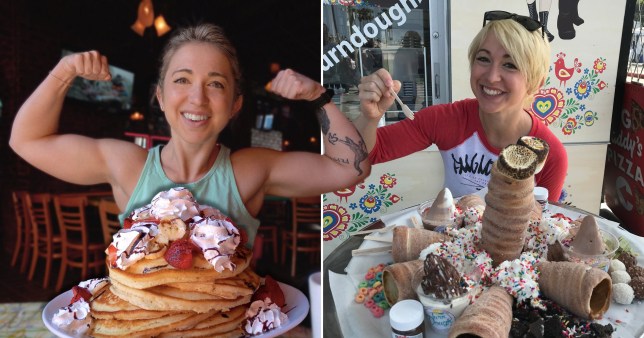 After taking part in a bodybuilding competition, Katina DeJarnett was tired of feeling hungry on a diet.

So in April 2019, she decided she would stop that way of consuming food and become a competitive eater instead.

The 29-year-old, from Washington, USA, now enjoys thousands of calories in one sitting around once a week, but she still weighs nine stone and wears a UK size six.

Katina started out watching restaurant challenges on YouTube and decided to try one herself.

She bought a cheap camera and filmed herself at a local restaurant challenge, eating the ‘Fatburger XXXL Kingburger’, a cheeseburger with three half-pound patties, and later uploaded the video to YouTube.

After her success, she started pursuing larger restaurant challenges, and tried calorie challenges too – with her toughest so far being 16,000 calories consumed in one day, gorging on fast food, cookies and peanut butter.

She now has more than 200,000 subscribers and she also posts on Instagram as @katinaeatskilos.

She said: ‘Growing up, I always loved food and have always been a big eater. I could eat a huge burger and chips faster than my dad when I was six years old, and I’d still ask for seconds.

‘I got into video gaming in my teenage years and became overweight. By twenty-one I weighed 11st 4lb and decided to quit gaming. 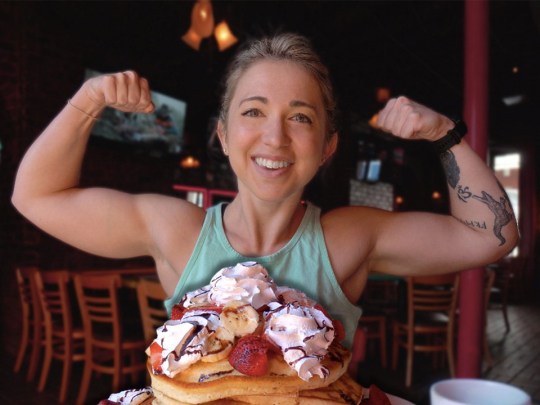 She now does challenges about once a week (Picture: MDWfeatures/katinaeatskilos)

‘I got into bodybuilding, and in April 2019 I competed in a local women’s physique bodybuilding show.

‘While preparing for the show, I was always extremely hungry as I was dieting, so I started watching videos on YouTube of competitive eating and food challenges to compensate.

‘I ended up placing in the top five of the bodybuilding show, and decided to bulk up and gain more muscle – all while putting my huge appetite to use.

‘I bought a cheap camera and went along to a local restaurant challenge, which was a relatively small two-pound burger that had to be eaten in twenty minutes.’

Katina said that after her first challenge, she still felt hungry so she realised she could take on more.

She said: ‘I pursued larger restaurant challenges, always recording them and uploading them to my YouTube channel, and then started doing home challenges too.

‘During a challenge, I try to eat as quickly as possible so my stomach doesn’t have time to tell my brain I’m full.’

Her new hobby has also helped her find love as in July 2020, she met fellow professional eater Randy Santel, 34, from Missouri, USA, while doing a food tour in Alaska.

They bonded over their mutual passion and became a couple during their 10-day trip. Next year, they hope to tour the world together and taking part in global eating challenges.

Between challenges, Katina eats less, having just one large meal with plenty of leafy green vegetables, wholegrains and protein.

She aims for an overall amount of calories per week, rather than per day.

‘I’m careful to balance my calorie intake, and generally aim to eat between eighteen-thousand and twenty-thousand calories per week,’ she said. 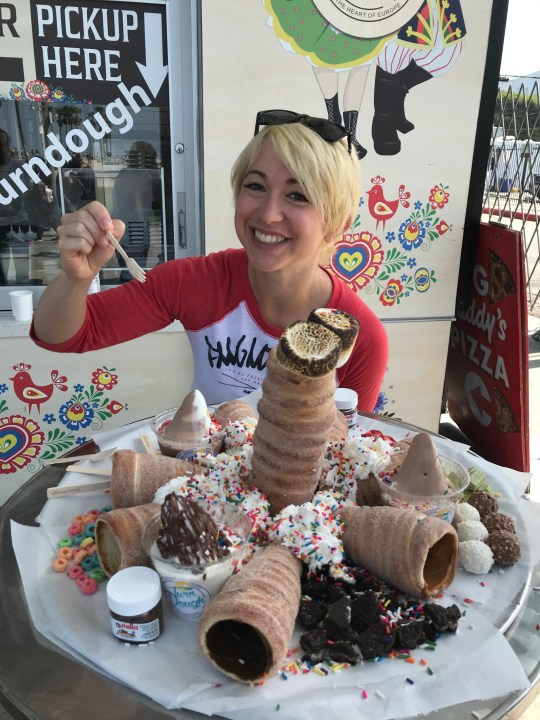 ‘If I film a restaurant challenge that is seven-thousand calories, I know I only get to eat eleven-thousand for the remainder of the week.

‘I’m also active in the gym and take at least ten-thousand steps a day, so this and my understanding of nutrition helps me to control my weight.

‘I generally only do one food challenge a week, but when my boyfriend and I tour in 2021, it’s likely that we’ll do them more frequently, so I’ll probably gain some weight.

‘I get asked how I maintain my weight all the time online. Some people will stumble upon my videos and think it’s gluttonous, rather than realising I eat a calorie-controlled diet overall.

‘I just happen to eat a ridiculous amount all at once as opposed to spreading it out. Dealing with negativity or harsh opinions is just part of being in the public eye and, for the most part, the viewers are very positive and supportive.’

The competition she found most difficult was the Screaming Demon Wings challenge in Spokane, Washington.

She ate a pound of hot wings with no water, and the chicken was covered in a spicy gravy that was ‘incredibly painful’ and caused her sickness for over a week afterwards.

She said: ‘The hardest part of an eating challenge is overcoming flavour fatigue – which is when your mind gets sick of a certain flavour and tells you not to eat anymore.

‘It becomes hard to continue eating even if you aren’t physically at full capacity. It can be a struggle to swallow each bite.

‘But mostly I love doing the challenges. My favourite memory was in Amarillo, Texas, completing the seventy-two-ounce Big Texan Steak challenge.

‘I had wanted to try it ever since I was a teenager because the restaurant sets you up on stage, and it is just a very fun environment with a supportive crowd.

‘Challenges are a bit like putting on a show, it’s just a blast. I do it for entertainment – and because I love a good challenge.’

Get in touch at metrolifestyle@metro.co.uk.