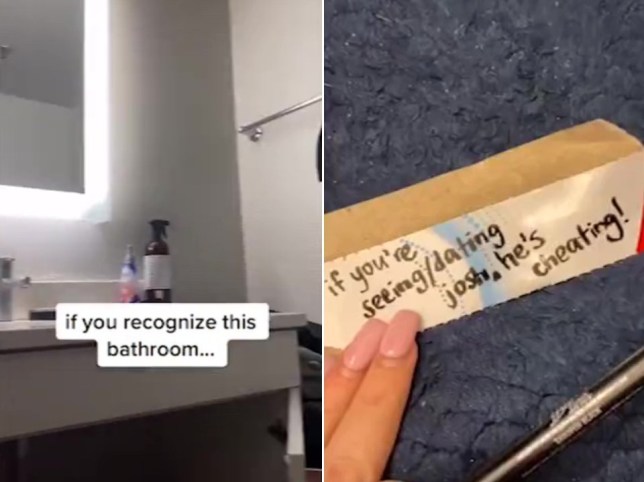 Would you do the same? (Picture: TikTok/mollycsharpe)

A woman has left a secret note in the bathroom of a man she’d been casually seeing after finding ‘female products’ in his bathroom.

After having a cheeky look through his bathroom, she decided to try to warn the presumed owner of it all with a note that reads: ‘If you’re seeing/dating Josh, he’s cheating.’

The video, titled ‘just trying to look out for the girls’, pans over the bathroom in question, with a caption written over it that says: ‘if you recognise this bathroom…’

The woman, Molly, then focuses the camera on things like hair pins, hairbands and a full makeup bag.

Molly says in the video: ‘So last weekend I picked up a guy in a bar. I’ve seen him three or four times now.

‘I was low-key snooping in his bathroom. And I found some female products.

‘His roommate is single, and I thought he was too, but if this is your man, he is cheating.’

In the comments, Molly gave an update, writing: ‘I confronted him and he got upset/defensive, says he single but won’t explain the products, idk if it’s a gf but still sus so haven’t seen him since.’ 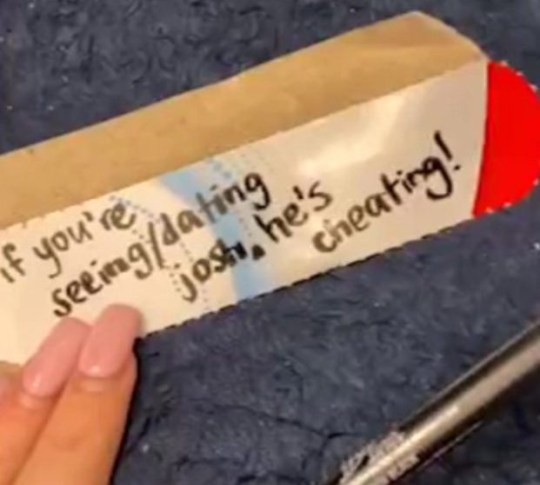 The note in question (Picture: TikTok/mollycsharpe)

She also commented: ‘There weren’t any hair ties on the counter the first three times’, which suggests that they had been used very recently.

Does Josh or his roommate have long hair? Could either or both be into makeup and skincare? We may never know.

Regardless, the clip has got over 156,000 likes so far, so suffice it to say people approve of Molly’s decision to warn ‘Josh’s potential girlfriend.

One person commented: ‘The Note!!! THIS IS GIRL CODE YALL!’ while another wrote that it was ‘genius’.