THERE’S no denying just how tempting it can be to have a quick scroll through your partner’s phone when they’re not looking… but as a general rule, it’s probably not a good idea.

That said, if their screen is reflected in their glasses then that’s got to be a guilt-free way to know what they’re up to. Right?

Maddy could see what her husband was up to on his phoneCredit: TikTok 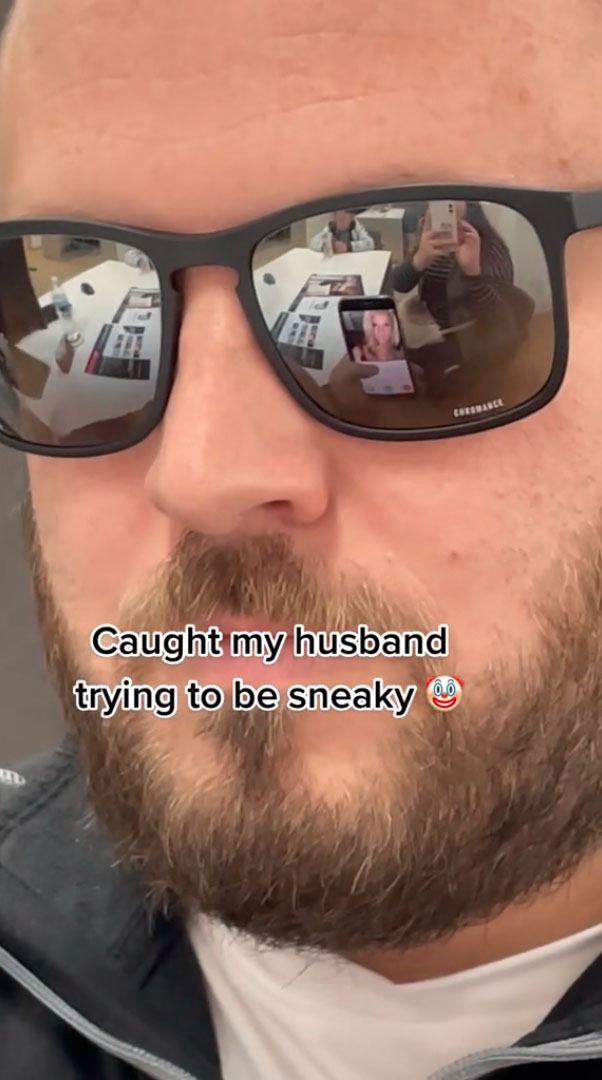 She caught him swiping through photos of womenCredit: TikTok

Well woman has been rightfully left a little irritated after spotting her husband looking at other women online in this way.

But people reckon it could be even worse than she thinks.

In a viral video that’s racked up over 787,000 views, TikToker user Maddy filmed her husband seemingly swiping through photos of women on his phone.

Zooming in on his mirrored glasses, Maddy asked: “Babe, what are you doing?”

Unaware that she could already see exactly what it was he was up to, her husband replied: “Hmm? Just looking at BMWs.”

Trying to make the lie plausible, he then quickly went back to the car website he’d previously been looking at.

It was at this moment that he realised his wife was on to him and the bloke replied: “Why are you recording…?”

“Caught my husband trying to be sneaky,” Maddy captioned the video.

The video ends with Maddy bursting into laughter and joking that her partner was “in trouble”.

But while Maddy wasn’t exactly impressed with her husband’s actions, viewers were fuming on her behalf.

After seeing him seemingly swipe left on women, one viewer replied: “So we gonna ignore he’s on a dating site???”

A third wrote: “Wow I’d be so livid I can’t even explain it.”

Although Mandy insisted that the video was genuine, others speculated if it was staged as a joke.

A fourth said: “Um if this isn’t a joke….isn’t this really disrespectful to you and shouldn’t you leave ? If you aren’t in a open relationship…”

For more relationship stories, this woman’s date body-shamed her when trying to convince her to come over – they’re the grimmest messages she’s ever received.

And this finance expert revealed why women SHOULDN’T be splitting half the bills with their partners.

Plus this 18-year-old stay-at-home wife revealed people accuse her of being lazy as she likes to sleep in the afternoons.