A WOMAN decided to flog her engagement ring online after becoming “repulsed” by her ex.

Taking to Facebook Lisa posted the listing for the engagement ring in a local buy and sell page. 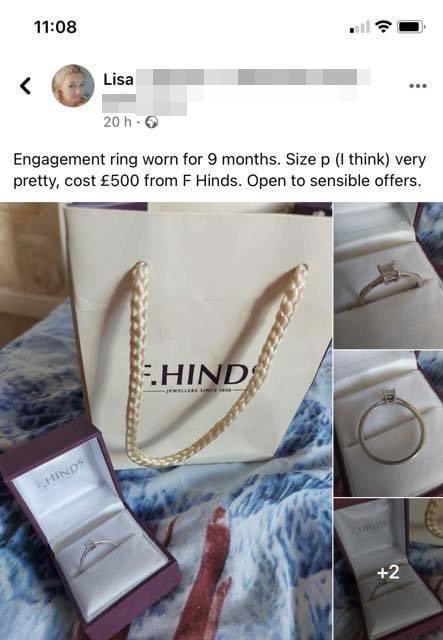 Lisa explained that she was selling her ring after becoming “repulsed” by her ex-fianceCredit: Facebook

She revealed the ring, which she is selling for £500, was worn for just nine months, leading one potential buyer named Pam, to ask why she was selling it.

And rather than sending a quick response, Lisa replied with a VERY detailed description of how their relationship came to an end.

She describes how she met this “really nice soft giant” who had claimed he had been hurt and cheated on and she was “naive” enough to believe it.

“I meets this bloke, don’t find him physically attractive that much but a nice person (again wrong)” she writes. 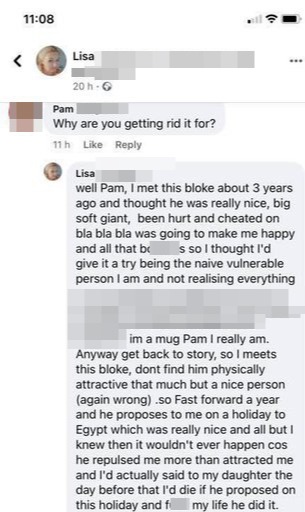 Lisa’s response when asked why she was selling it has left people in stitchesCredit: Facebook

“So fast forward a year and he proposes to me on holiday in Egypt which was really nice and all but I knew then it wouldn’t ever happen because he repulsed me more than he attracted me.

“I actually said to my daughter the day before that I’d actually die if he proposed to me on this holiday and f*** my life he did.”

Lisa continues to explain that she had said yes because they were in a restaurant surrounded by people.

“The ring’s already inside a glass of champers which I wish I’d of took the risk on choking on to be honest” she adds.

“It’s too late, I’m in too deep Pam, my daughter’s white, my other daughter’s crying, I’m crying through despair not happiness little did they know and it’s all gone too far Pam I couldn’t say no then could I?!”

Lisa continues to air her frustrations and to cut a long story short, she broke off the engagement.

She later added: “I might as well get some dollar back and have a banging Christmas dinner Pam!

“Might even buy me a nice pair of shoes so I can walk away from the next b*****d who tries to ruin my life!”

The exchange has since been shared on Twitter where it has received over 21,000 likes after it left her followers in stitches.

Responding one wrote: “I was glad she got a happy(ish) ending! Hope that Christmas dinner is banging…”

In other relationship news, this woman went hunting for the “hot guy” who left a video on her phone – but it didn’t end well.

And this woman hooked up with her boyfriend’s housemate & got pregnant… ten years later they’re married and have two kids.

Plus this woman revealed how to tell if your partner has an active Tinder account.