When you were a kid, did you ever need to write down something on paper as an agreement between you and someone else, whether as a promise or because you were a kid and concluding contracts with people was just something you really aspired to do because lawyering is awesome?

Whatever the case may be, having a contract on even the most (seemingly) trivial things can end up helping you win an argument. For example, if that argument is proving to someone they done goofed up by asking to never be woken up prematurely, and then being blamed for not doing that.

Being a heavy sleeper isn’t a bad thing, but it does come with its own challenges—especially if those challenges make you hella grumpy

So, a woman in her late 20s recently turned to the Am I The A-Hole community on Reddit with a throwaway account (for privacy purposes) with a dilemma: was she wrong not to wake up her boyfriend for his first day of work at a new job after, some time ago, being specifically told not to ever wake him up?

Let’s rewind. The 28-year-old explained that she has been with her boyfriend for 3 years now and there was an incident where she noticed that he had overslept. So, she decided to wake him up, but he was not really happy about it—and so he demanded she never do it again. 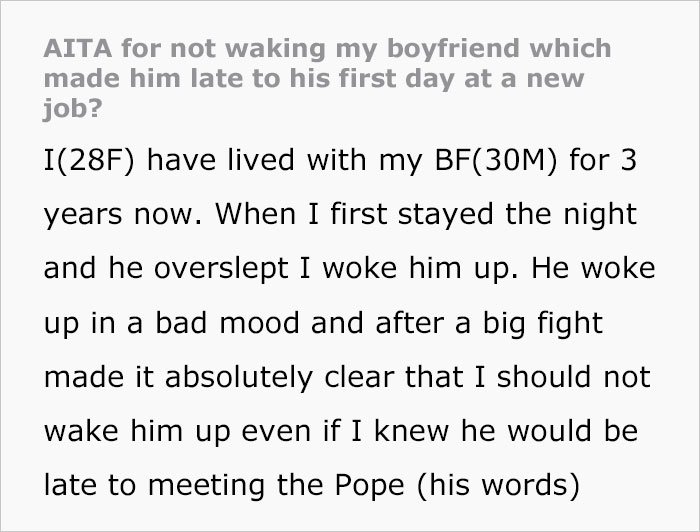 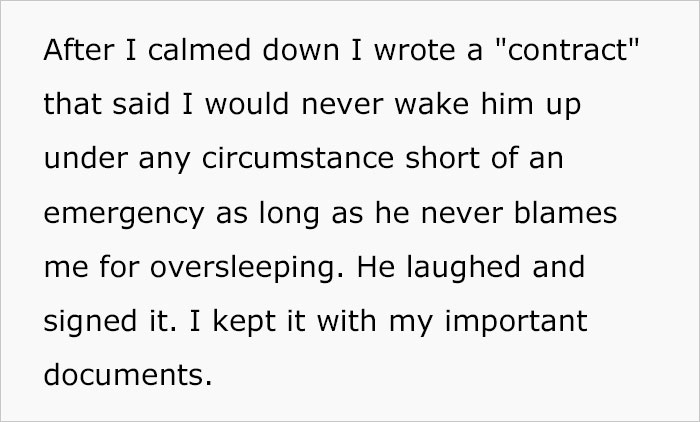 What she did, however, was draft up a little contract. Being a daughter of lawyers, it was only appropriate to make it official that he is never to be woken up under any circumstance (well, save for an emergency), and she will not be accountable for any implications that this might lead to. And it was a deal.

Well, the day came where the boyfriend was to start his new job, and she did exactly what she agreed upon with him—she woke up at 5AM, he was sleeping. Come 7AM, he was supposed to wake up and he didn’t. 8:15AM, she left for work, he was still in his bed.

She came home later that day to see her boyfriend very angry. He started shouting at her, claiming that she should have woken him up. Once he stopped with the screaming, she handed him the contract he signed ages ago, and said she would never wake him up because of this. Moreover, he’s a big boy now and he can set up his own alarm like everyone else on this planet. 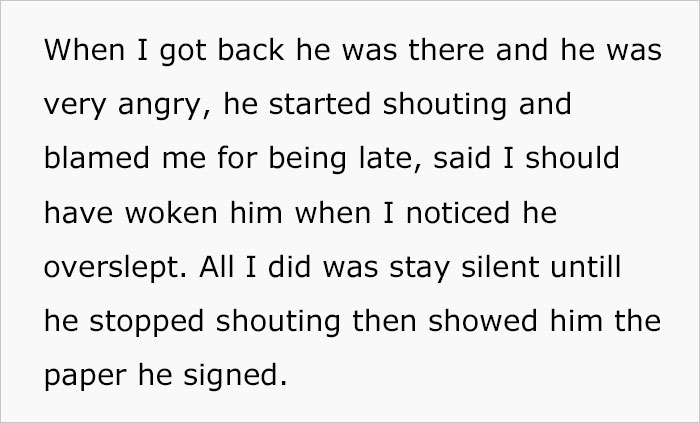 While he did try to argue that that was then (he used to work for a friend who was lax with timekeeping) and this is now (new job, new routine and responsibilities), the girlfriend was having none of it and still thinks she’s in the clear here.

The story was shared on the Am I The A-Hole community on Reddit where it garnered over 18,400 upvotes with a bit over 30 Reddit awards. And the people were all on the side of OP.

For the most part, everyone agreed that she is not a jerk, though there was reason to think that everyone needs to tone their principles down

For the most part, everyone argued that the boyfriend is a grown up, and as social norms and rules entail, he ought to take responsibility for his own wake-up schedule and not blame it all on someone else.

Others turned to the contract, saying he’s wrong to not have voided or, at the very least, amended it, since the conditions changed, and he only has himself to blame there.

Yet others suggested that maybe he isn’t the right fit for her if he acts this way, and suggested the girlfriend reevaluate the relationship given the circumstances.

There were some who argued that everyone sucks here as these are mature adults that refuse to act like it and it’s, if anything, toxic for the relationship when the two ought to be supportive and caring. 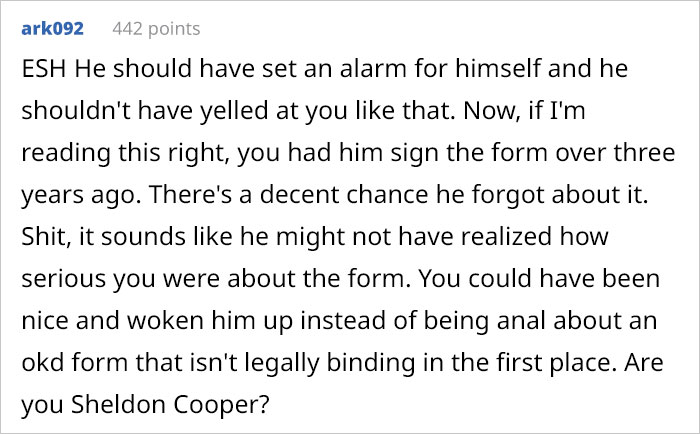 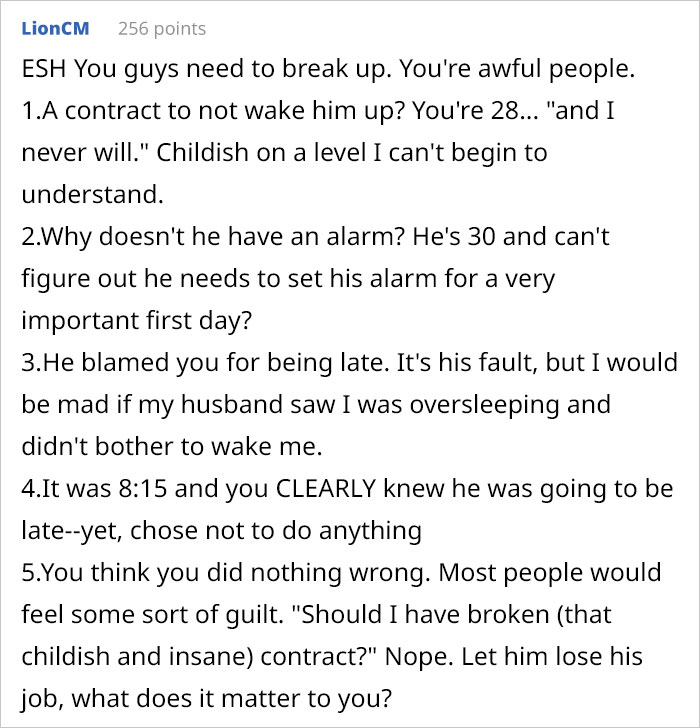 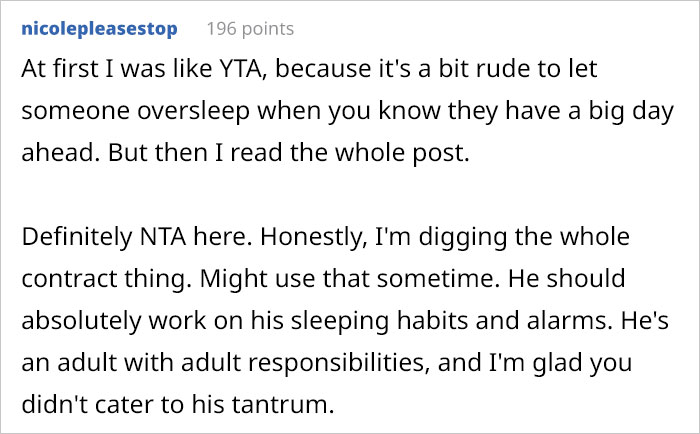 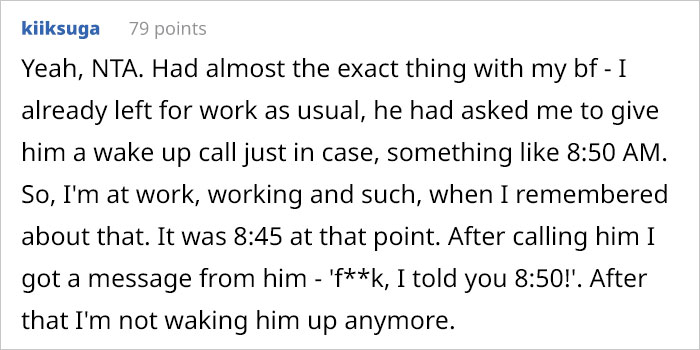 You can read through the entire post with everyone’s comments here, and you’re free to also check out other Am I The A-Hole stories we have covered thus far. But before you dash off on your next adventure, let us know your thoughts in the comment section below!