While eating healthily may not be at the front of your mind while reaching for a bag of your favourite crisps, Walkers said it’s aiming to make half its products healthy or low calorie by 2025.

The crisp giant is changing the recipes for their Walkers Baked, Doritos Dippers and Popworks lines in order to make them non-HFSS, which means high in fat, sugar and salt.

PepsiCo UK&I general manager Jason Richards said the change was ‘a significant milestone in our long-term commitment to provide smart snacking choices, without compromising on taste.’

‘We’ve been making changes to our portfolio over many years, but now is the time for even bolder action.’

So while the change will impact the Walkers Baked, Doritos Dippers and Popworks lines, the classic Walkers crisps will remain unchanged for now.

Of course, Walkers is one of the best-known crisp manufacturers in the UK – but just which of their flavours is the one people most favour?

What is Walkers’ most popular crisp flavour? 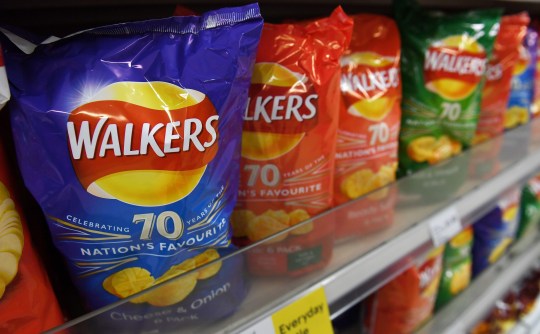 Walkers has revealed that its most popular flavour is the classic Cheese and Onion.

It’s so popular that Walkers even included it in the meaty multipack, despite it not being a meat-flavour.

However, the meat and fish flavoured crisps, like Roast Chicken, Smoky Bacon, and Prawn Cocktail, are actually all suitable for vegetarians.

The Walkers crisps line includes a range of flavours, from classics like Ready Salted, Cheese and Onion, and Salt and Vinegar, to newer flavours like Worcester sauce and Marmite.

Meat-lovers can indulge in Roast Chicken and Smoky Bacon, while the more daring crisp eaters among us might like to try the new Flamin’ Hot flavour.

Did Walkers change the colour of the Cheese and Onion packet?

Crisp fans may think they remember Walkers Cheese and Onion crisps being green, while blue was the colour of Salt and Vinegar.

But Walkers said it’s never changed the colour of the flavours, saying: ‘Our Salt and Vinegar and Cheese & Onion flavour crisps packs have always been the colours they are today.

‘Contrary to popular belief, we’ve never swapped the colours around, not even temporarily. We’ve no plans to change these designs, as they’re signature to our brand.’

The confusion might come from the colour of Walkers Squares packs—because Salt and Vinegar is blue, and Cheese and Onion is green.

Walkers says this is because ‘Squares were originally produced by Smiths, before becoming part of Walkers in 1989. So to avoid confusion, [Walkers has] left their classic pack colours unchanged.’