A third of Brits have no plans to serve Chrstmas pudding this year – but the pop-up wants to change this (Picture: Getty)

When it comes to Christmas foods we all have our favourites – whether it’s pigs in blankets, mince pies or Yule logs.

But Christmas pudding is pretty low down on the list for many.

In fact, according to new research, a third of Brits have no plans to serve it this year – with nearly half (48%) of Gen Z saying they don’t like it.

To help the nation fall back in love with the humble Christmas pudding, a brand new pop-up has launched to help the dessert gain popularity again.

The new Christmas pudding pop-up has been organised by the team at Sainsburys – who are inviting guests to try either a traditional option, or the brand new Taste the Difference Caramelised Biscuit Pudding.

The alternative take on the traditional pud is drizzled with spiced caramel sauce and sprinkled with caramelised biscuit crumb – and has come about after recent research revealed salted caramel is among the nation’s favourite dessert flavours. 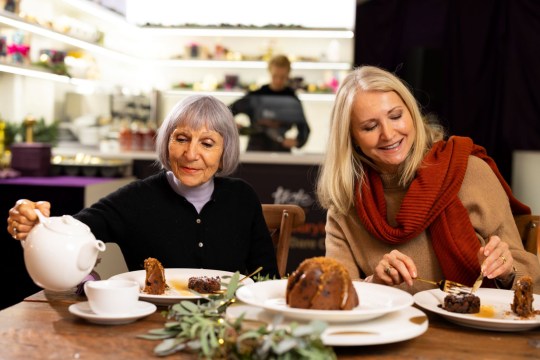 It’s also very much in the Christmas spirit too, as Sainsbury’s is donating £3 on behalf of each pop-up customer to Comic Relief – to help tackle food poverty this winter.

Anyone wanting to give the Christmas pud a second chance can visit the pop-up at 62–64 Southampton Row, London WC1B until 7pm today.

Claire Hughes, the director of product and innovation at Sainsbury’s, said: ‘Our insights revealed that the past three years has seen the biggest shift in flavours favoured by the nation than any other timeframe.

‘The Christmas pudding has slowly fallen from favour, but many of those who have written it off completely have never even tried it. We hope our café gives them the opportunity to change their minds.’