THE jobs market is continuing to recover from the coronavirus pandemic, new data shows.

There are now 28.5 million employees on company payrolls, but this is still 553,000 below the employment levels seen before the pandemic.

The rate of unemployment fell slightly to 4.7% in the three months to April, official jobs data from the Office for National Statistics (ONS) shows.

The unemployment rate was 4.8% in the three months to March, after surging to a five-year high of 5.1% in February, when the number of jobless Brits at 1.74million.

Sam Beckett, ONS head of economic statistics, said: “The number of employees on payroll grew strongly in May, up by almost 200,000, although it is still over half a million down since the pandemic struck.

“Job vacancies continued to recover in the spring, and our early estimates suggest that by May the total had surpassed its pre-pandemic level, with strong growth in sectors such as hospitality.

“Meanwhile the redundancy rate remains subdued, while the number of employees on furlough has continued to decline.”

The ONS data shows that the redundancy rates fell, and is now at a similar level to before the pandemic. 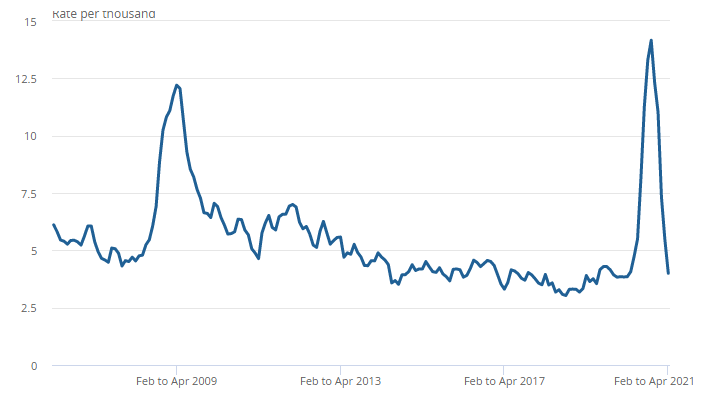 Job vacancies also increased between March and May, with 758,000 positions advertised.

That’s just 27,000 less than January to March last year before the pandemic.

Employment minister Mims Davies said there are “real signs of recovery in the labour market”.

The Prime Minister Boris Johnson yesterday pushed back the final stage of getting the country back on track after the pandemic.

The planned June 21 date for the last lockdown restrictions lifting has been delayed to July 19.

Rising cases of the Indian or Delta variant as it’s also known, have derailed the government’s roadmap at the last stage.

The furlough job support scheme which has supported Brits unable to work because of the pandemic will continue to September as planned.

No extension was announced as the delay was revealed..

Chancellor Rishi Sunak said: “Our Plan for Jobs is working – the latest forecasts for unemployment are around half of what was previously feared and the number of employees on payroll is at its highest level since April last year.

“We understand the value of work and the distress caused by unemployment – that is why we are continuing to support people and jobs.

“The furlough scheme is running all the way through until September and we are creating new routes into work through apprenticeships, Kickstart placements for young people as well as targeted support for the long-term unemployed.”

Data released last week shows the economy grew by 2.3% in April when pubs, shops and restaurants could reopen after months of being in lockdown.