NOTTINGHAM FOREST are closing in on a sensational return to the Premier League but they have finish off the job in their play-off semi-final second leg against Sheffield United THIS TUESDAY.

Steve Cooper’s men raced into a 2-0 lead courtesy of goals from Jack Colback and Brenan Johnson.

Nottingham Forest take a slim lead back to the City Ground for the second leg.Credit: Rex

And Forest could have wrapped up the tie had it not have been for some woeful finishing in the second half.

But complacency began to creep through the veins of the visitors as time went on.

Which led to Sander Berge’ header blowing the semi-final wide open in the 91st minute.

What time does Nottm Forest vs Sheffield Utd kick off? 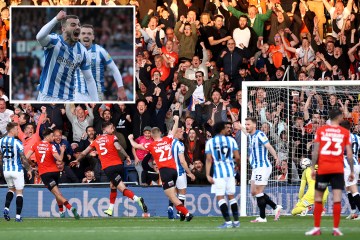 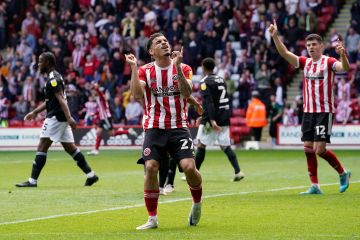 What TV channel is Nottm Forest vs Sheffield Utd on and can I live stream it?

Nottingham Forest boss Steve Cooper would have been delighted to welcome back the quintet of Max Lowe, Ryan Yates, Keinan Davis, Steve Cook and Jack Colback.

Especially the latter who netted Forest’ opener in the first leg at Bramall Lane.

However Lewis Grabban’s hamstring continues to be a problem as Cooper confirmed last week that the striker will miss the remainder of the year.

Elsewhere, Morgan Gibbs-White and George Baldock also returned to footballing action on the weekend for the Blades.

Conor Hourihane was able to make it to the bench despite not training before the match.

But the first leg came a little too early for talisman Billy sharp, however, he COULD be available for the trip to Nottingham if passed fit.

To qualify (incl ET and PEN)