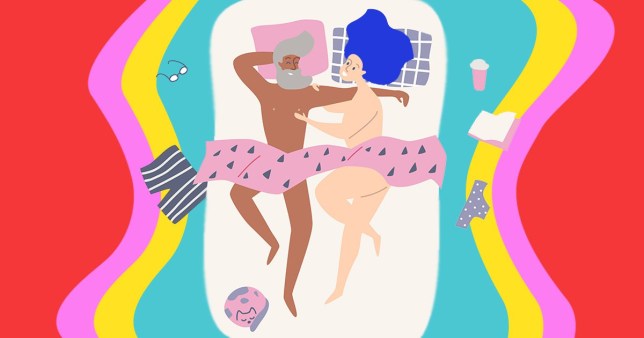 This year hasn’t been a great one for romance.

Either you’re separated from people you’d like to get sexy with, or you’re in lockdown with them, spending every moment of the day together – which is bound to be a bit of a passion killer.

So it’s not surprising that along with drops in sex drive, many of us have fallen into a rut when it comes to love-making.

Half of UK couples are currently stuck in a sex rut, according to a survey of 2,000 from affairs website Illicit Encounters.

More women (58%) than men (46%) say their sex lives have become stale and they long to bring some adventure back.

If you’re in a rut that’s making you miserable, you probably already know about it… or your partner does.

But to help you identify this common issue, the survey revealed the top 10 signs most frequently listed as evidence of being in a boring sexual routine.

The top one is all about location, while the second focuses on timing.

Then we get into the juicy stuff. If you’re regularly reminiscing about past encounters, that’s not a good sign.


Most common signs of a sex rut:

Don’t panic if you’re ticking off every point on the list.

As we said, falling into these patterns is super common, and especially likely amid the pandemic.

The survey found that 54% of couples settled into a sex rut a year into the relationship.

Chloe, 32, says she began an affair with a married man because her sex life stalled due to her boyfriend being obsessed with football.

‘I always knew what I was getting with Scott when we first got together because he has followed United home and away and to all European games since we were at uni together,’ she said.

‘I thought things would improve in lockdown when he could not go to games.

‘But he was just as obsessed as before and I got bored of always playing second fiddle to the Reds.

‘Our sex life got stuck in a rut because of United. He would be moody when they lost or drew and he would spend hours on online forums if they won discussing the match.

‘Our sex life was great at first but it inevitably peters out over time and you start going through the motions.’

Even in lockdown, Chloe has been having sex outside of the relationship as she craves excitement.

She said: ‘I was very careful and made sure we had both had tests before meeting up.

‘We had sex in his car in a deserted spot in the Peak District near Manchester. It was so exciting to be having sex with someone new. I loved every minute of it

‘We meet up a couple of times a week – normally when United are playing and I know that Scott is distracted.

‘I am sure I will have other affairs when the lockdown finally ends in June because I love the buzz of meeting someone new.’

It goes without saying that cheating is not the only way to bring the excitement back to your relationship.

Shall we explore some kinder options?

A dampened sex life can feel like a massive elephant in the room. It’s awkward to address it, but it’s worth pushing through that discomfort.

Try not to assign any blame (use ‘I feel’ statements rather than ‘you aren’t making enough moves’) and stay open and judgement-free.

There might be something deeper going on, such as issues with libido or a loss of emotional connection, or the problem could be down to something as simple as struggling to find the time for trying something new.

The easiest way to make sex feel fresh – take it out of the bedroom. Try on the stairs, on the sofa, in the kitchen, even just on the floor of the bedroom rather than the bed.

Scheduling sex is not a bad shout, but try to mix it up a bit so it doesn’t feel like a chore.

If you always have sex right before bed, perhaps try a morning bang. If you save sex for the weekend, make time for some midweek passion.

It’s easy to think of sex as just one thing, but there are endless ways to feel pleasure.

Try holding off from, or banning entirely, penetration for one night and see how you can get each other off.

Often a couple will naturally fall into one person initiating sex and taking charge during it.

Swap roles. If you’re usually the passive party, try being a little dominant.

Bring in some toys

Experimenting with toys is an easy way to up pleasure and try something new.

If this is all new to you, start slow with a vibrating bullet.

There are plenty to choose from, so why stick to the same go-to position on repeat? Change things up.