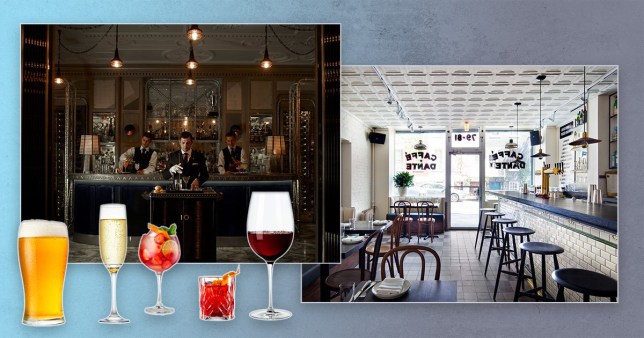 The two bars that came out on top (Picture: Connaught Hotel/Dante/Metro.co.uk)

Bars, pubs and restaurants may have closed their doors for a while – but there’s still reason to celebrate in the meantime.

The World’s 50 Best Bars of 2020 have been revealed, with a popular London venue scooping the top spot.

Connaught Bar, located in the opulent Connaught Hotel, has been crowned the winner – climbing from second place in 2019.

Last year’s winner, New York’s Dante, now falls at number two in the rankings – but was also awarded the The Best Bar in North America accolade.

It was a big night for the capital, with two other London bars placing within the top 10 – with Tayēr + Elementary taking fifth position and Kwãnt just behind at number six.

Other London venues to make the 2020 list include Ryan Chetiyawardana’s Lyaness at number 29,  Swift at number 33, Three Sheets at number 34 and Artesian at the Langham at 41.

Bars in Athens, Singapore, Buenos Aires, Hong Kong and Tokyo all made it into the top 10.

Following in the footsteps of lots of other industry events, the award’s ceremony took place online this year.

Mark Sansom, content editor for the World’s 50 Best Bars said: ‘We want to extend our heartfelt congratulations to all the venues on the 2020 list of The World’s 50 Best Bars. We are continually heartened by the industry’s resilience and positivity as countries continue to operate in varying degrees of recovery.

‘Hats off to Connaught Bar, undoubtedly one of the finest cocktail bars of our time. The institution has earned a place on the list every year since 2010 and it has gradually grown in stature to become the world-beating bar it is today.

‘We at 50 Best hope that the announcement of The World’s 50 Best Bars 2020 will act as a show of strength for the global bar community.’