CAN you fall for someone who does not speak the same language?

The telltale signs that someone is lusting after you as Davina McCall launches new C4 dating show The Language of LoveCredit: Mark Beltran

The Language Of Love, which starts tonight at 10pm, pairs Brits with Spaniards looking to find The One. But first the hopefuls must overcome the language barrier.

Davina says: “There were a few really massive eruptions of lust where somebody would walk through the door and were like, ‘Wow!’ But this show is different from so many other dating shows. The people here are all invested in finding love, not fame and success.

“Because of the cultural differences, it’s flipping funny.”

She says: “Authentic signals of attraction will always be non-verbal, meaning the language barrier won’t be too much of a problem.”

Here, she tells Georgette Culley the unspoken signs they fancy you. 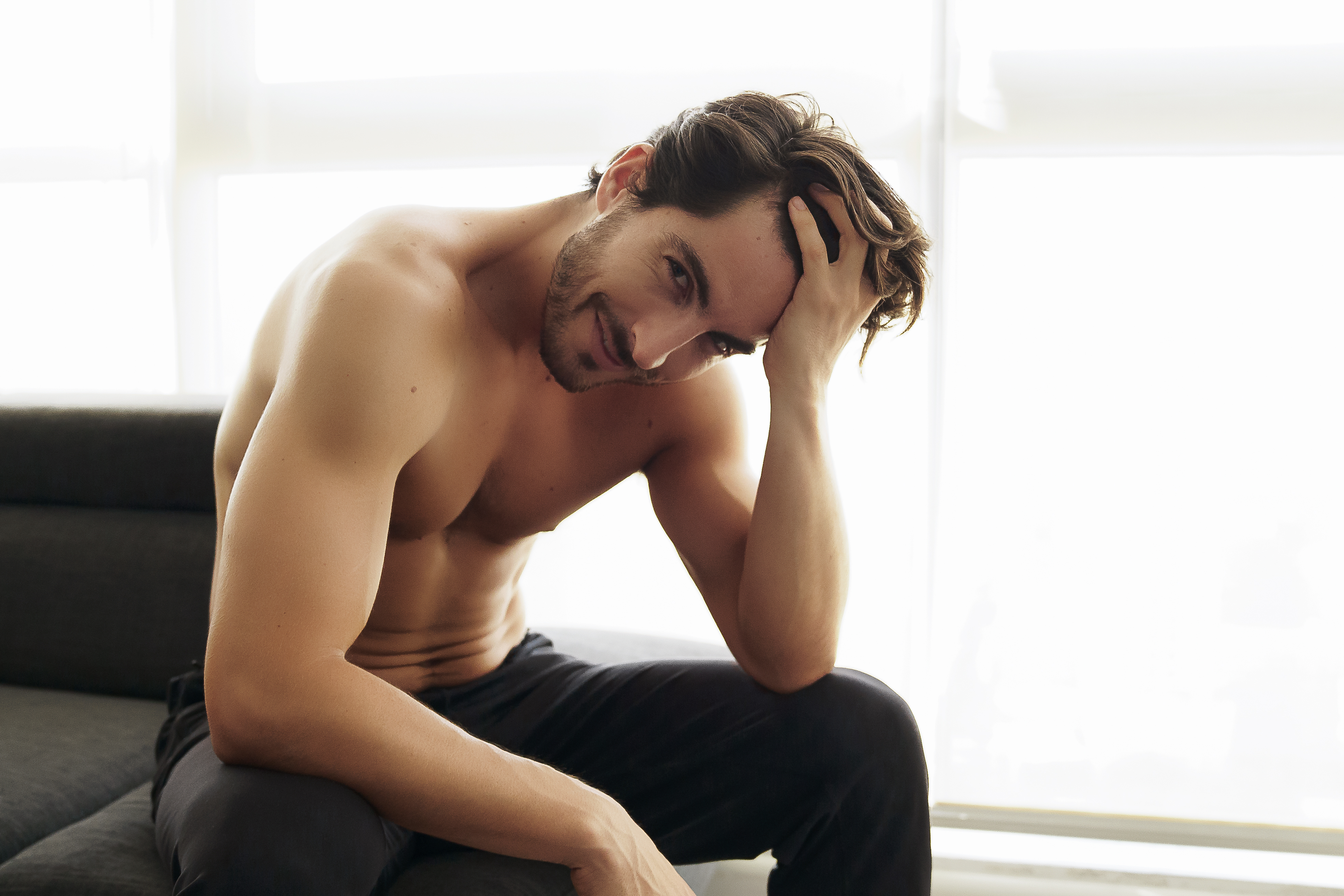 One telltale sign is ‘peacocking’, which men do by chest-puffing, leg-splaying, small crotch-bumps or passing his hand through his hairCredit: Shutterstock

PEACOCKING: Like most animals, men feel the need to “peacock” when they see a potential mate they like the look of. In humans, the puffing and preening tends to emerge as chest-puffing, leg-splaying, small crotch-bumps or passing his hand through his hair.

THE EYE-FLICK:If he is only after your body, his eyes will keep flicking down to your breasts, bum or legs. If he is interested in a more romantic relationship, the eye-flick will move from your face to your hands as he tries to get to know you. Genuine flirting will involve an eye-to-mouth flick, where he looks you in the eye with dips to your lips. This is about preparing to kiss or speculating about how it might feel.

THE ASYMMETRIC SMILE: A polite smile is usually symmetrical — an even shape with both corners of the mouth turned up. A flirting smile will be more complex, with one side of the mouth higher up. 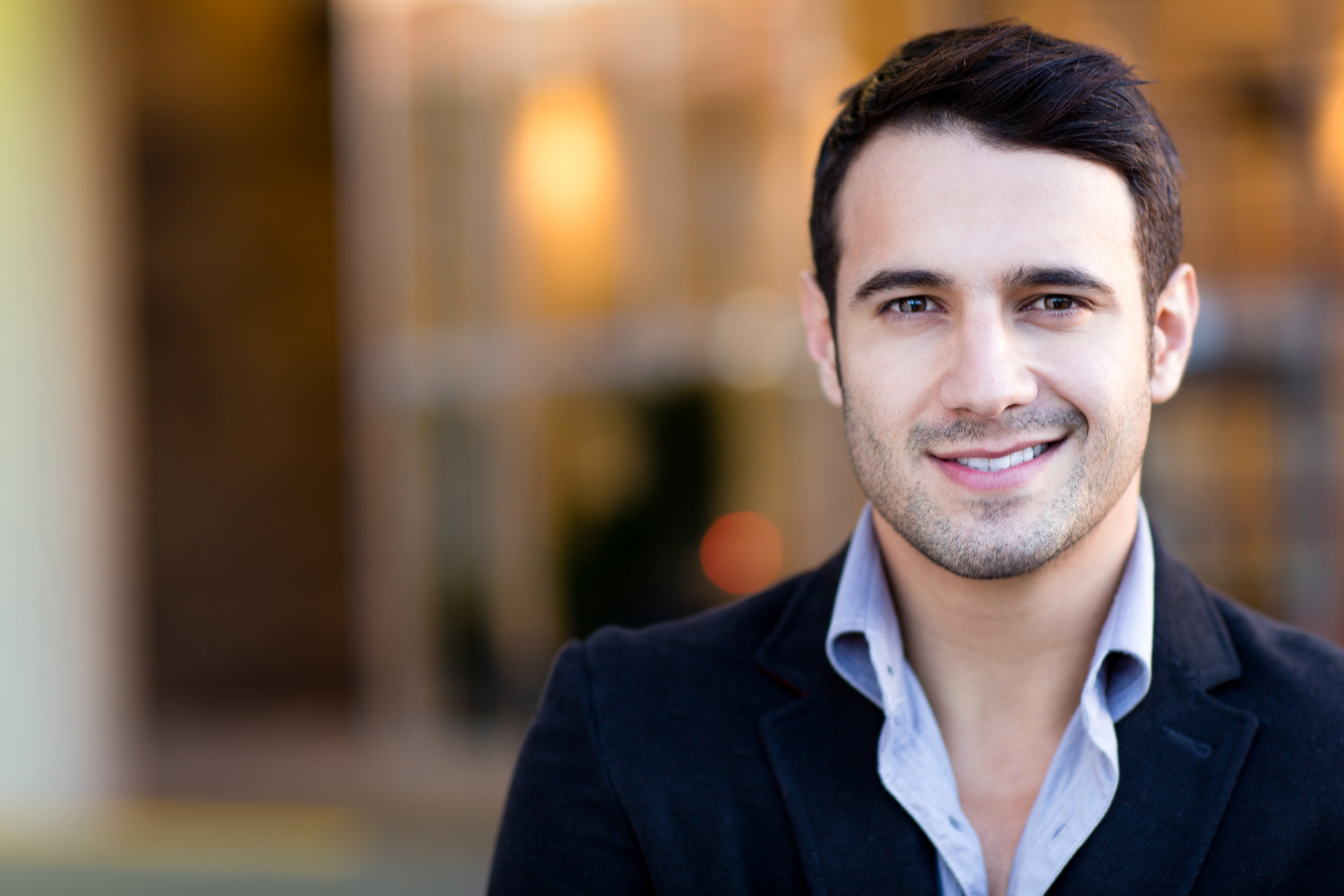 A flirting smile will be usually be more complex, with one side of the mouth higher upCredit: Shutterstock

THE LIP-PUCKER: Guys often try to suppress the soppier smile that is an authentic signal of attraction or love, because they want to keep their cards close to their chest until they know the attraction is mutual.

But if he fancies you, the impulse to grin will be strong. You’ll often see a lip-clamp smile with lots of puckering around the top lip as he tries to play it cool.

THE EYEBROW   FLASH : A very traditional gesture of attraction and the introduction of a flirt ritual. It’s when men first see someone they fancy and their eyebrows pop up and down again quickly in a sign of approval that expects a smile in response.

EXPLORATORY TOUCH: Most guys feel an urgent need to find out if their attraction is reciprocated and this will show in the first, all-important touch   ritual. Soon after meeting, it can be a touch on the arm as they laugh or share a joke, or a pat on the shoulder or hand. 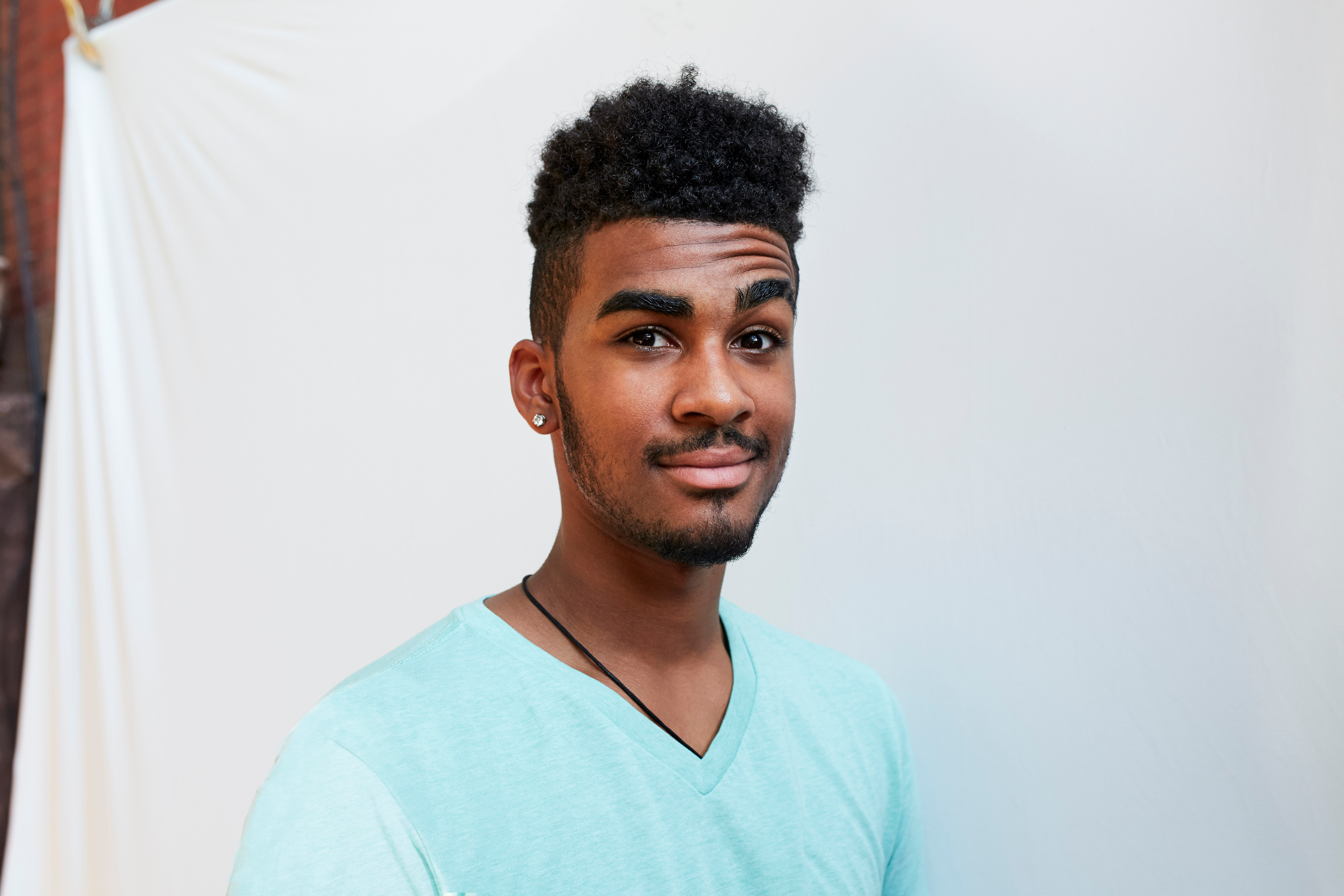 A very traditional gesture of attraction and the introduction of a flirt ritual is the eyebrow flashCredit: Shutterstock

INTIMACY: If you meet in a club, pub or restaurant, he will feel drawn to gradually cordon you off from the room. He may subtly block you from the view of others and begin to enter the intimate zone of proximity by leaning in as you speak and using more intense listening skills like eye contact and nodding.

WEARING WHITE OR MONOCHROME: A white shirt or top is a first-date classic to signal a guy is clean and well-groomed. Dark contrasts worn with white create more of an alpha male vibe. Alternatively, blue signals honesty. 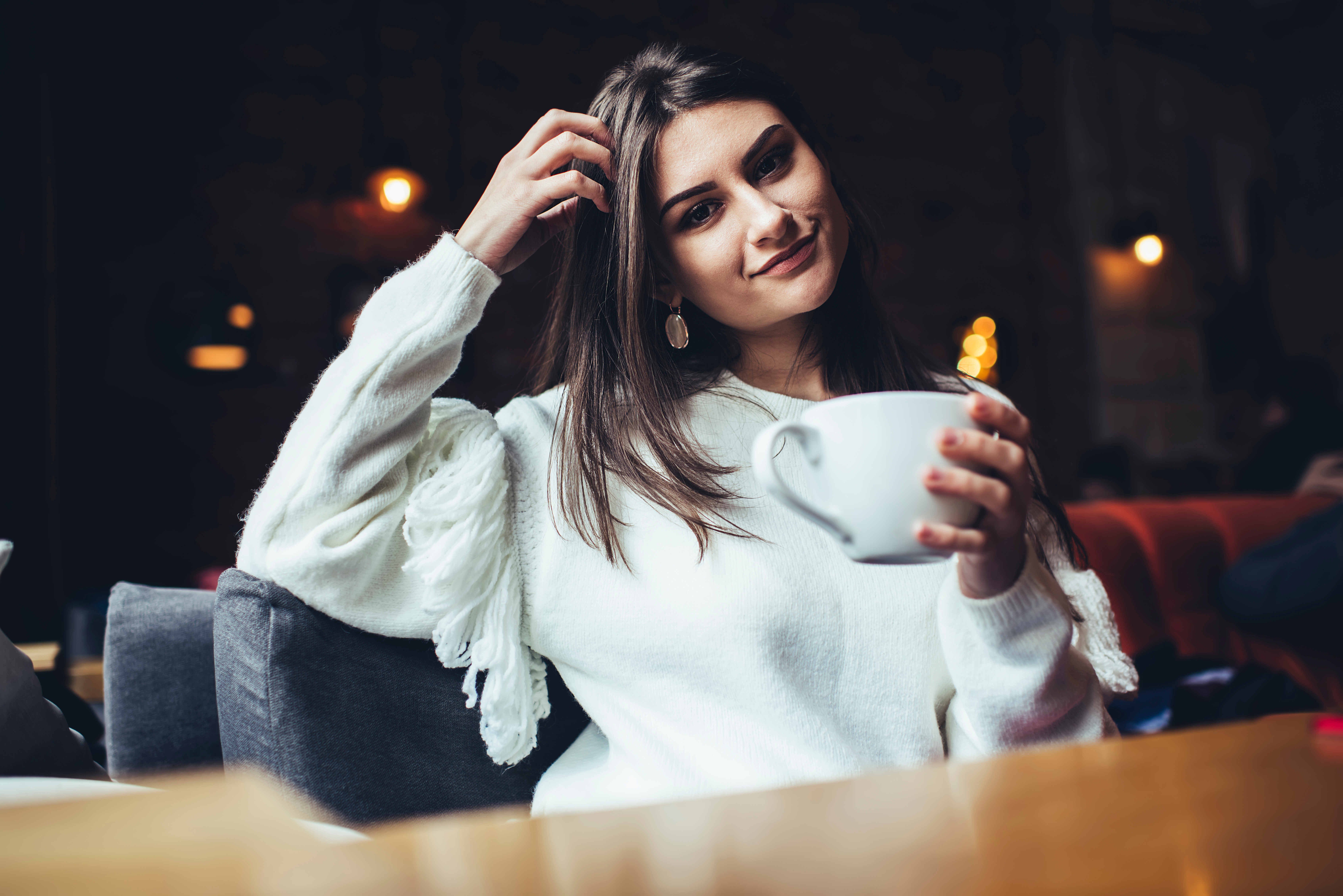 Flirting women will move their hair in either a slow touch or strokeCredit: Shutterstock

PREENING: More seductive than the peacocking moves men do, this involves movement of the hair in either a slow touch or stroke, or even a gentle flicking gesture to expose the neck or one side of the face.

WRIST-BARING: Revealing the inside of the wrist via a face touch or hair-preen tends to show sexual interest and the desire to get closer. It also allows access to the warm spot where her perfume has usually been dabbed.

THE S-BEND: Ladies can signal sexual attraction and a desire to flirt by altering their posture. The back will arch slightly to make the body form an S-shape, making the breasts and bum more prominent. 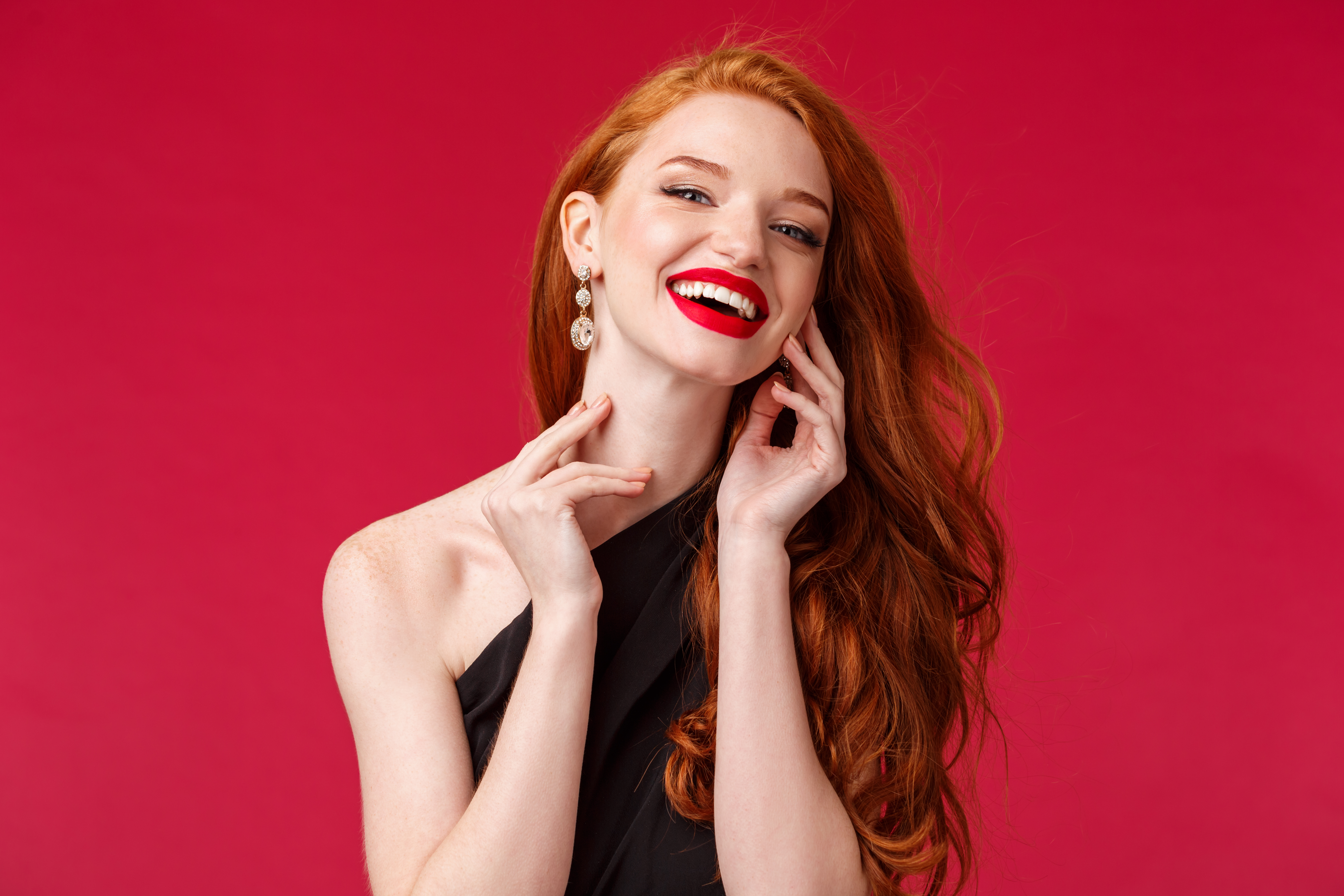 If you catch a woman touching her face, such as the lips of eyes, it’s a sign they are interestedCredit: Shutterstock

FACIAL TOUCH: This often involves small touching movements that direct a guy’s eyes to certain parts of the face, such as the lips or eyes. The lips tend to swell slightly when we are attracted and flirting, which can also prompt more touching or licking gestures.

DROP IN VOCAL TONE: Although women can get a higher vocal pitch to attract attention in the early stages of flirting, the vocal tone will often drop lower as they speak, mimicking the way the vocal tone will lower and become huskier when couples make love.

Male contestants on Davina’s show might not understand what a woman is saying but if they notice her voice is lower while talking to them, it could be because she fancies them. 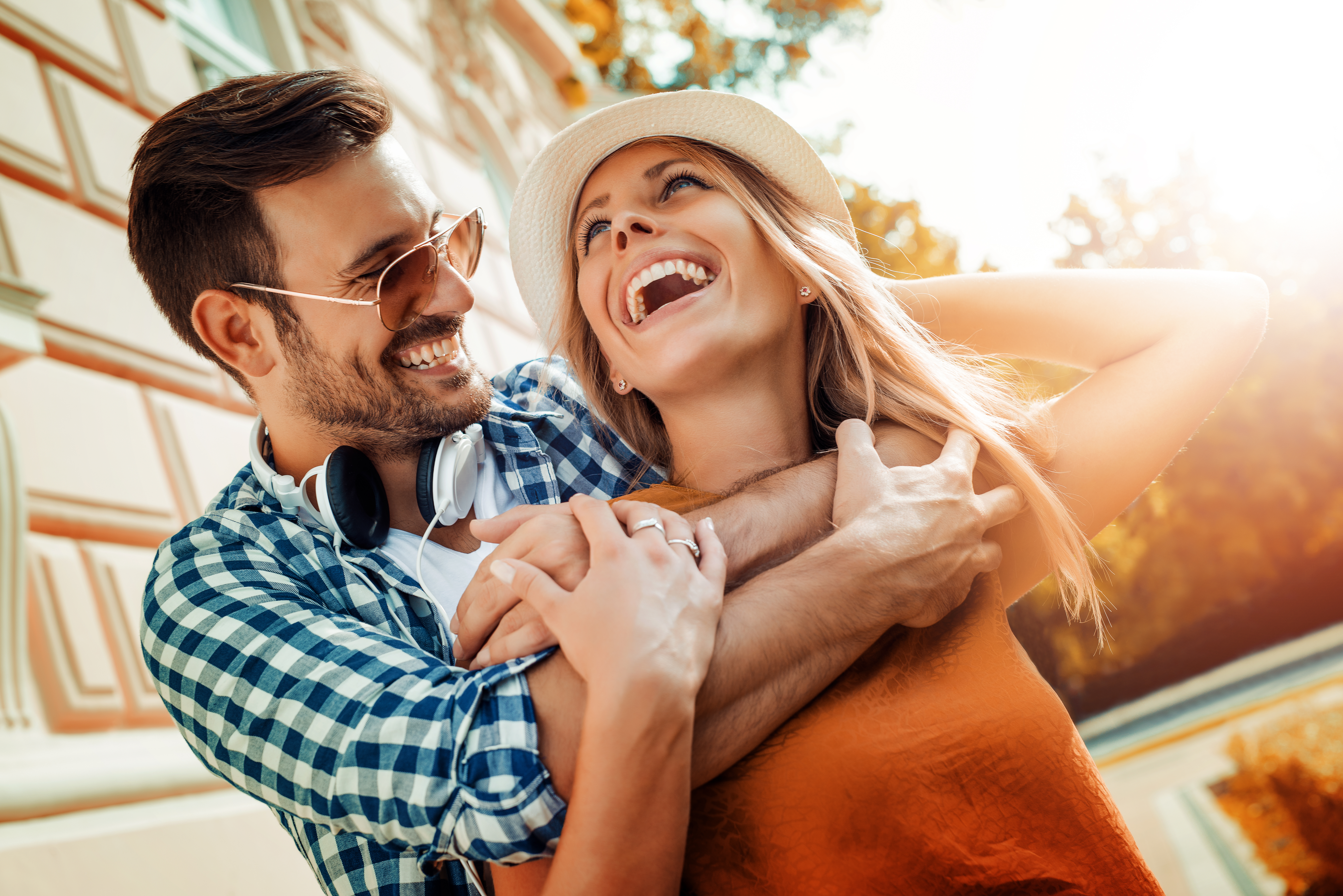 An overkill laughing ritual every time a guy says anything faintly amusing is a telltale sign they’re interestedCredit: Shutterstock

HEAD-THROWING LAUGH: Flirting is flattering — and for a woman, that often means overkill laughing rituals every time the guy says anything faintly amusing. But this can result in an unattractive throwing open of the mouth, so women subconsciously throw their head back or forward to hide the unflattering facial expression as they laugh, or cover their mouth with their hand. This ritual also means extra scope for throwing the hair about in a preening ritual.

COYNESS: If we are attracted to someone then our response is often more about shyness, meaning the eye contact can lessen and there can be the impression of disengaging or disinterest. The avoiding of eye contact is a tell-tale sign of this, as are blushing and going quiet.

RED DRESS: A cliche suggesting a woman wants to be the centre of attention. The colour itself can have a physical effect, exciting the nervous system. She might also choose killer heels to emphasise her sexuality.