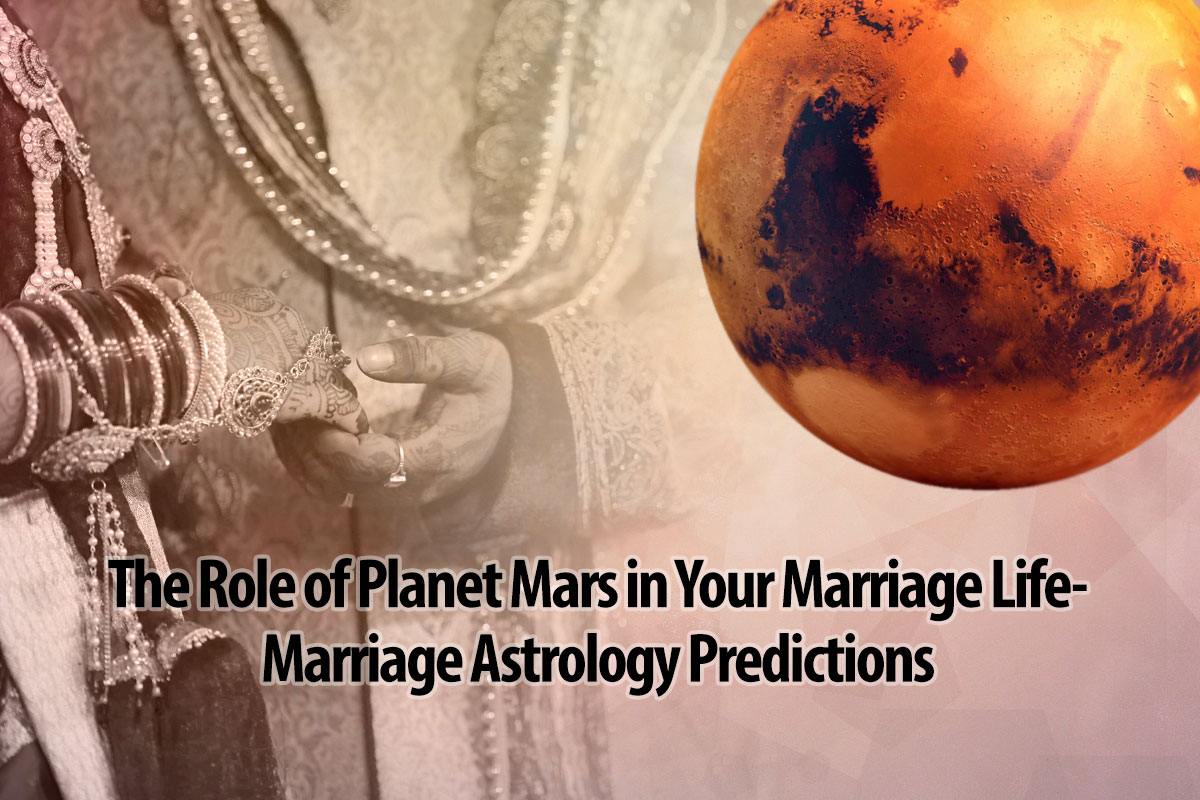 Marriage is one of the significant events in the life of a person. Marriage bonds not just individuals but the entire families. Every one of us wishes to have a fulfilling and happy married life. We look forward to spending our lives with our ideal partners. In India, astrology has played a major role while fixing marriage alliances among Hindus. Marriage Horoscopes of the prospective bride and groom are matched to ensure that they enjoy a good and happy married life. Often, we consult our astrologers to understand the favourable periods and marriage yogas when a person can get married and also check for any Doshas, especially the Manglik Dosha, while analysing the marriage prospects.

In Vedic astrology, the planet Mars plays a significant role in astrological marriage predictions, determining an individual’s marriage prospects and how it affects their married life. Astrologers can predict the marriage prospects by analysing the position of Mars in the Janma Kundli. If the placement of Mars is in the 1st, 2nd, 4th, 7th, 8th and 12th house of an individual’s horoscope, he/she is determined to have Manglik Dosh. People who have Manglik Dosh often experience a delay in marriage as their horoscopes should be matched carefully and precisely to negate the malefic effects of the Manglik Dosh and to ensure that both partners live a happy, healthy and long married life. To make accurate marriage predictions, accurate birth details must be provided, like the time, place and date of birth, to understand the effects of Mars on the native’s life events. Let us now try to understand how Mars plays a significant role in the married life of an individual.

The Influence of Mars on Marital Life

According to online Vedic astrology, Mars is considered as a planet with masculine energy and makes the individual courageous and confident. As per astrology, while Venus bonds individuals together, Mars imbibes them with energy, passion, fearlessness, and the grit to face demanding circumstances. While marriages in earlier times lasted longer as both partners attempted to stay put and work through the difficult periods, it has now become a recent trend among couples to easily let go of their married life as pressures of financial stability, career demands, lifestyles, work commitments, and responsibilities and stresses of raising children begin to crop up as villains in love and marital bliss. So let us understand how Mars could help mitigate these villains and restore marital bliss.

The planet Mars signifies prosperity and wealth and endows the native with vitality, energy, skills, and determination to pursue life’s purposes. It is believed that even if Mars is afflicted in the online indepth horoscope chart, its fiery energy can be aligned to accomplish our life goals. However, it is also important to understand the position of Mars in an individual’s birth chart to analyse how it affects the individual’s life events and how remedial measures can be incorporated to mitigate the malefic effects of Mars.

Manglik Dosha and its impact on Married life

According to Vedic astrology, Mars is considered as a hostile and inauspicious planet and its negative effects are often observed during the marriage or married life of an individual. An individual afflicted with Manglik Dosha may remain unmarried or may face difficulties or delay in marriage. Vedic astrology defines that if Mars is placed as an Ascendant in the 2nd, 4th, 7th, 8th and 12th house, it is considered to be inauspicious. The effects of Mars become more malefic if it is placed with other inauspicious planets in these houses. The combination of Mars with 2 or 4 malefic planets increases the malefic effects of Mars to twice or 4 times in the individual’s married life. The negative impact of Mars in each of these five houses are also different. Let us explore how Mars affects these five houses.

How does Mars affect the marital life

In India, while fixing marriage alliances, the horoscopes of the prospective bride and groom are matched and analysed to understand the position of Mars in their horoscopes and how it affects their marital life. The position of Mars will determine the happiness or strife in marriage. An individual with Mangal Dosha or Manglik Dosha often faces delays or hurdles in their marriage. It is also believed that if the effects of Manglik Dosha are too malefic, the native may also face separation from their spouse due to the death of the spouse. Hence in Vedic astrology, the position of Mars plays a significant role in predicting the marriage, longevity, and marital bliss of the couple and remedial measures are often suggested to nullify the malefic effects of Mars, the most common ones being Vishnu Vivah or KumbhVivah. There are a few more other common remedial measures suggested to lessen or nullify or resolve the Mangal Dosha and its negative impact on the marital life, as mentioned below:

Manglik dosha is often nullified if a Manglik is born on a Tuesday or marries another Manglik. Reading the Mangal Stotra, Mangal Kavach, Mangal Chandika Stotra, and Angkarakstotra are often advised to people with Manglik Dosha. They are also advised to fast and meditate on Tuesdays, chant Mangal mantras, perform pujas in Temples and wear appropriate gemstones to nullify the Manglik effects. Another well-known remedial measure often suggested is the Kumbh Vivah or marrying a pot or tree or Vishnu or Lakshmi to mitigate the ill effects of Manglik dosha from an individual’s chart. During Kumbh Vivah, the individual is first married to a pot and then pot is then broken which signifies that the individual is now widowed and has thus nullified the Manglik dosha. Few other remedial measures include donating lentils in a red cloth to a poor person, offering milk at the root of a Banyan tree, reciting Hanuman Chalisa and reading Sunderkand on Tuesdays.

While matching horoscopes, the following combinations of Mars nullifies the Mangal Dosha in a marriage. Certain Yoga formations in the horoscope of a Manglik can negate the Mangal Dosha effects. If the position of Mars in the groom’s horoscope is the same as the position of Saturn, Mars, Rahu, etc. in the horoscope of the bride, then the Mangal dosha is nullified and vice versa, as the positioning of malefic planets nullifies their ill effects on the marital life of both individuals. If Moon and Venus complement each other in the second house in the birth chart, then these negate the Manglik Dosha. There are other astrological combinations that are referred by astrologists to identify and negate the Mangal Dosha effects. Only an expert astrologer can analyze these effects and suggest the appropriate remedial measures to ensure that couples lead a happy and fulfilling married life.