Open-plan layouts, functional and adaptable furniture and minimalist designs are some of the trademarks of modernist interiors. For our latest lookbook, we’ve collected 10 living rooms that evoke the style.

Modernism emerged as an architectural movement in the 1930s and has influenced the pared-back appearance of many interior design projects ever since.

Among the renowned designers and architects who pioneered the style are Charles and Ray Eames, Mies van der Rohe and Le Corbusier, all of whom created designs and buildings that have become hallmarks of the trend.

This is the latest roundup in our Dezeen Lookbooks series providing visual inspiration for the home. Previous lookbooks feature kitchen extensions, homes with indoor trees and purple interiors informed by Pantone’s 2022 colour of the year.

London office Takero Shimazaki Architects renovated this apartment within the Barbican Estate, which is known for its brutalist architecture – a style that emerged in the UK in the 1950s.

Located within Shakespeare Tower, the flat intends to fuse its original design elements with Japanese aesthetics, including tatami mats on the floor that contrast with surrounding concrete walls.

“For our inspiration, we looked towards many of the early modernist Japanese architects, who were dealing with similar issues of identity when European modernism was entering Japan at rapid speed,” explained the architecture practice.

Find out more about this Barbican flat › 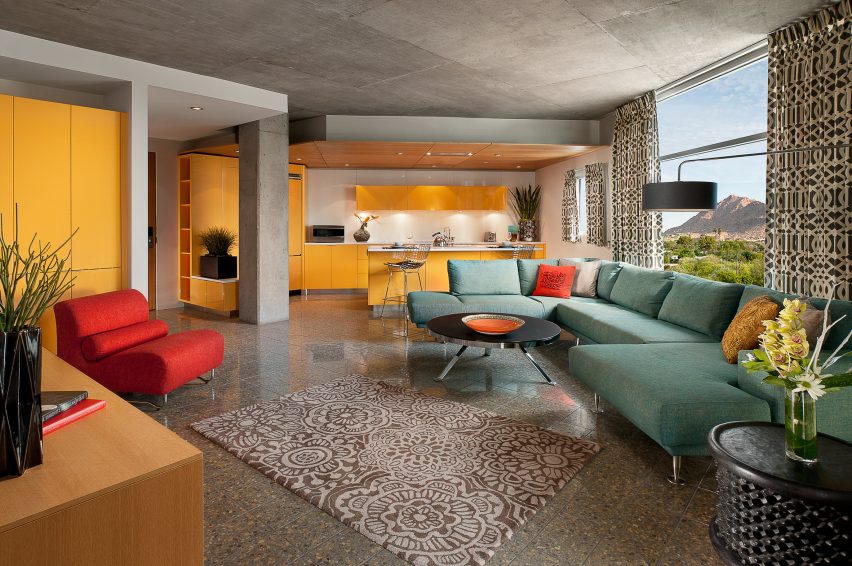 Guest suites nod to the period in which the hotel first opened, with elements such as open-plan kitchen-living rooms that feature low-slung, pared-back furniture and functional cabinets. 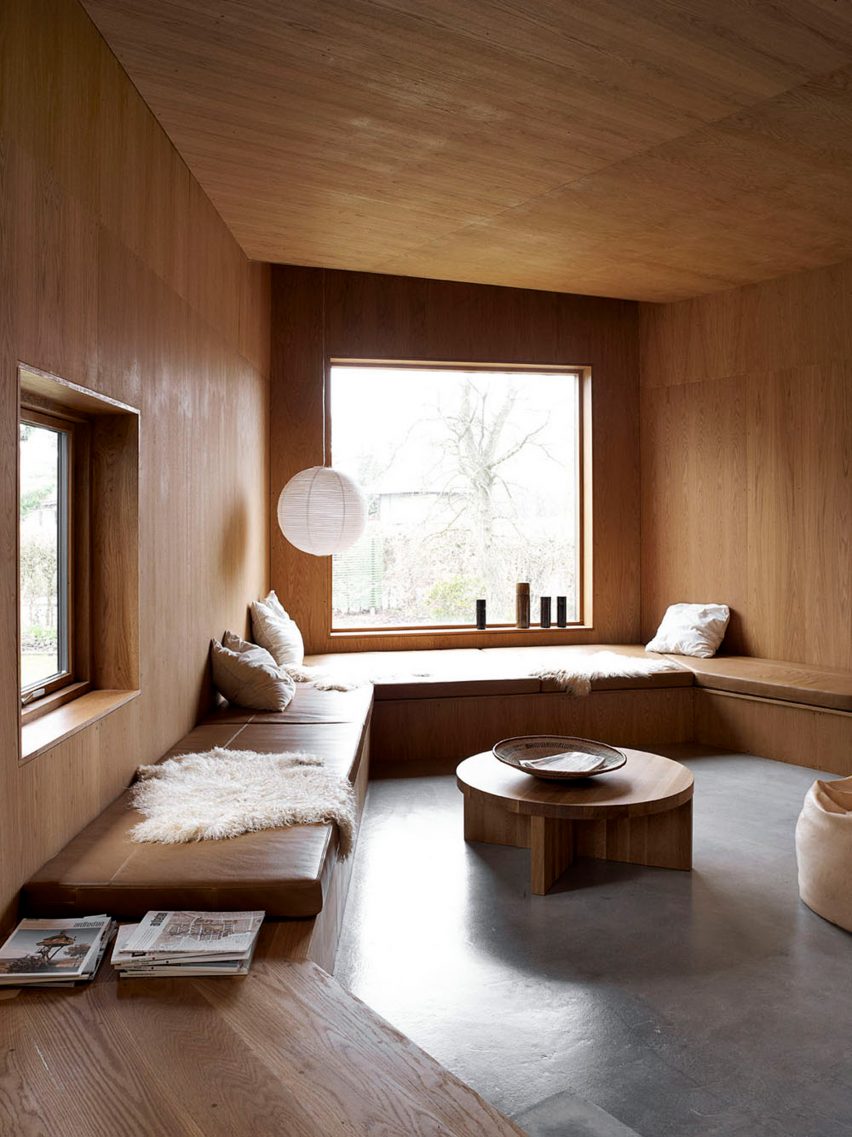 Photo is by Mikkel Mortensen

Another renovation project, this 1940s cottage in Denmark was stripped back by homeowners Mette and Martin Weinberg of Weinberg Architects and fellow Danish office Friis & Moltke.

Villa Weinberg’s living spaces are lined with floor-to-ceiling oil-treated oak boards that are interrupted only by large, boxy windows that add natural light to interior spaces.

Find out more about Villa Weinberg › 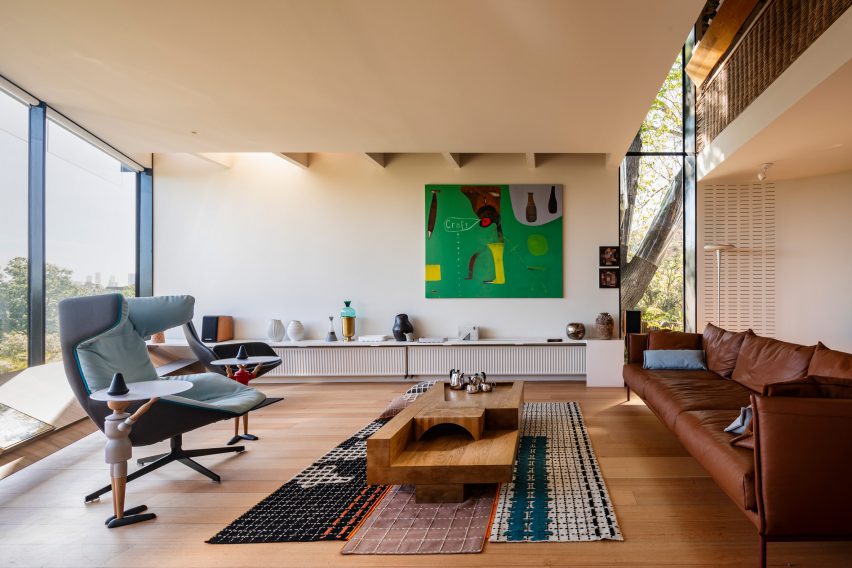 Photo is by Trevor Mein

The founder of Australian firm John Wardle Architects reworked his Melbourne home of 25 years to include interiors clad in Victorian ash – such as bespoke, functional shelves and plinths that hold eclectic ornaments.

Framed by expansive windows, the living room at Kew Residence also features distinctive Take a Line for a Walk armchairs by product designer Alfredo Häberli in a shade of pale blue.

Find out more about Kew Residence › 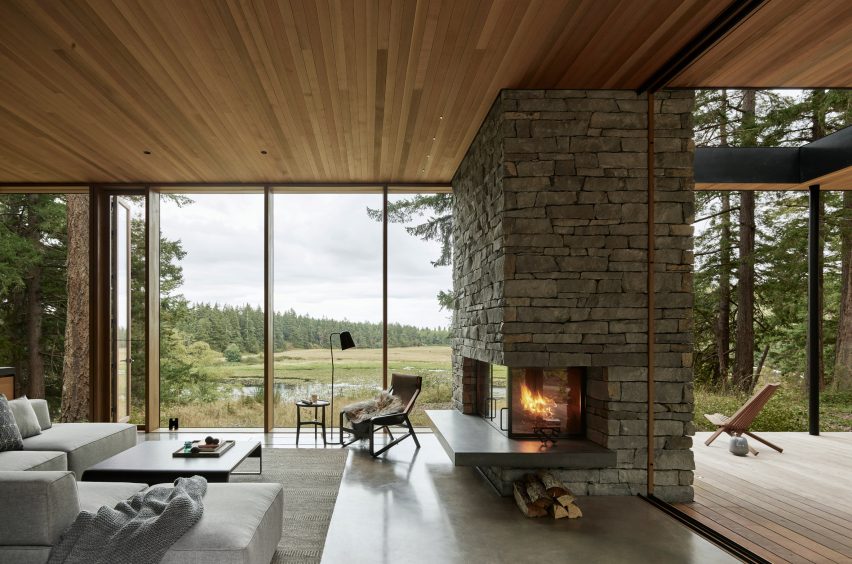 Photo is by Kevin Scott

Comprised of three rectilinear volumes arranged around a central courtyard, Whidbey Island Farm was designed by MW Works in Washington.

The house’s geometric shapes are also echoed in its interiors, which include a large, open-plan living room with soft colours and earthy finishes that overlooks a meadow where cattle graze. 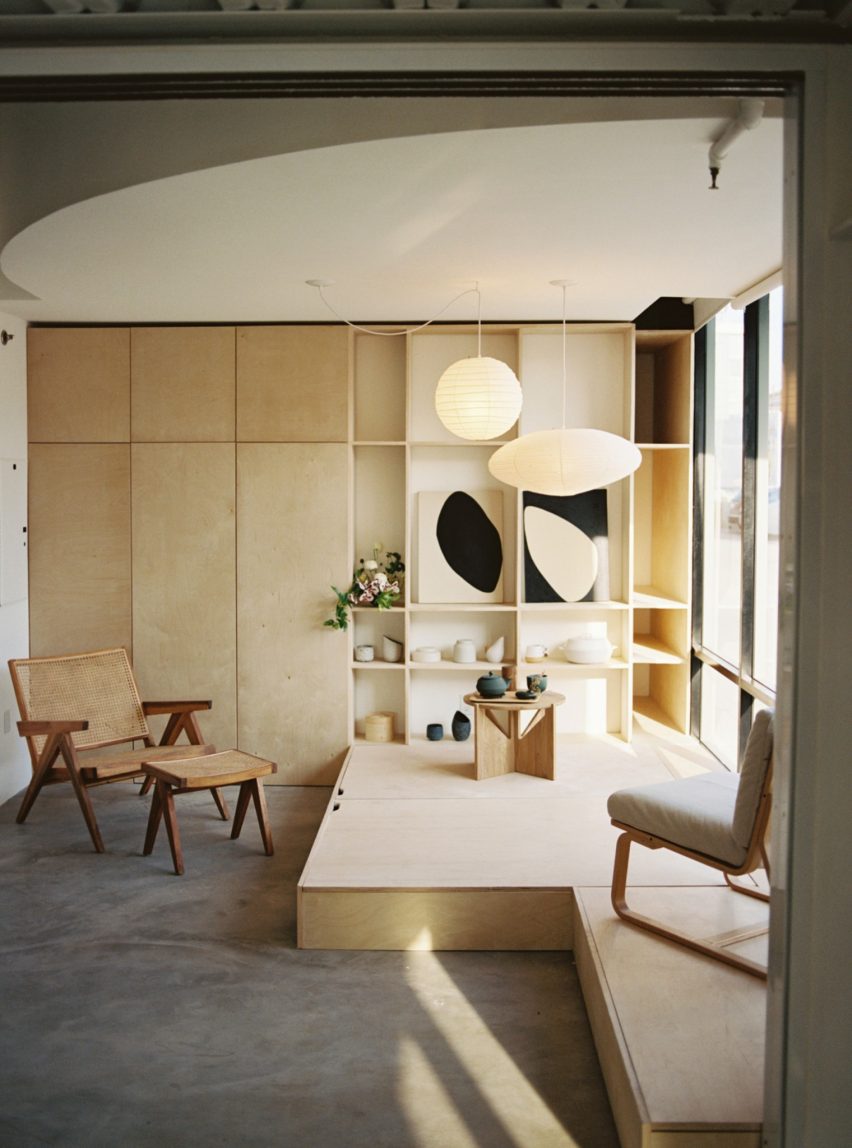 Photo is by Justin Chung

A distinctive Pierre Jeanneret Chandigarh Easy Chair is among the modernist design elements added to Biscuit Loft, an apartment in Downtown Los Angeles that is housed in a converted factory.

The project by local firm OWIU Studio takes cues from minimalist Asian design and features a spacious living area with functional furniture, including pared-back wooden shelving in a variety of shades.

Find out more about Biscuit Loft › 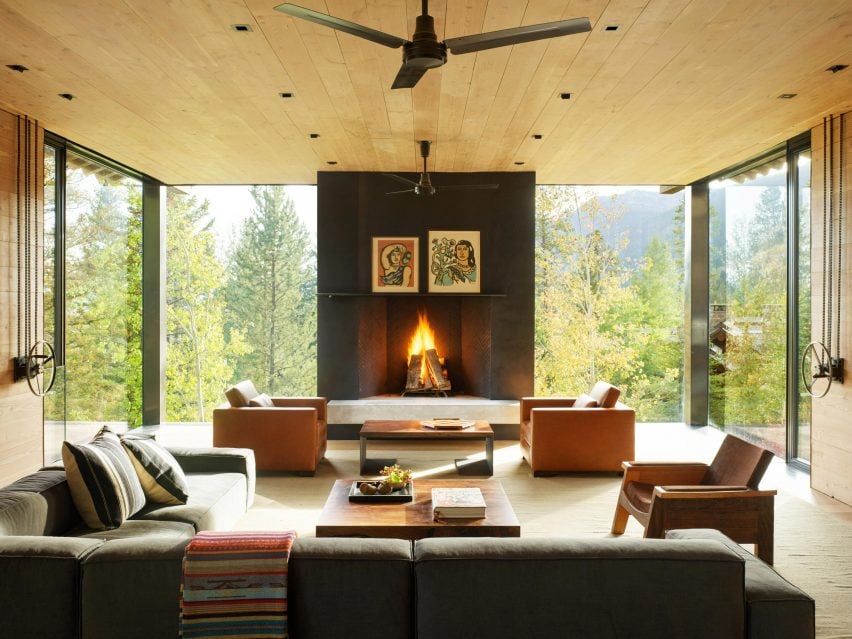 Photo is by Matthew Millman

Almost panoramic in its views thanks to floor-to-ceiling windows, the living room at Teton House hosts a collection of dark-coloured geometric seating arranged around a central fireplace.

Located in Wyoming for its mountainous landscape, the residence was designed by American office Olson Kundig, which covered the facade with large wooden shutters that can be open or closed with pulleys.

Find out more about Teton House › 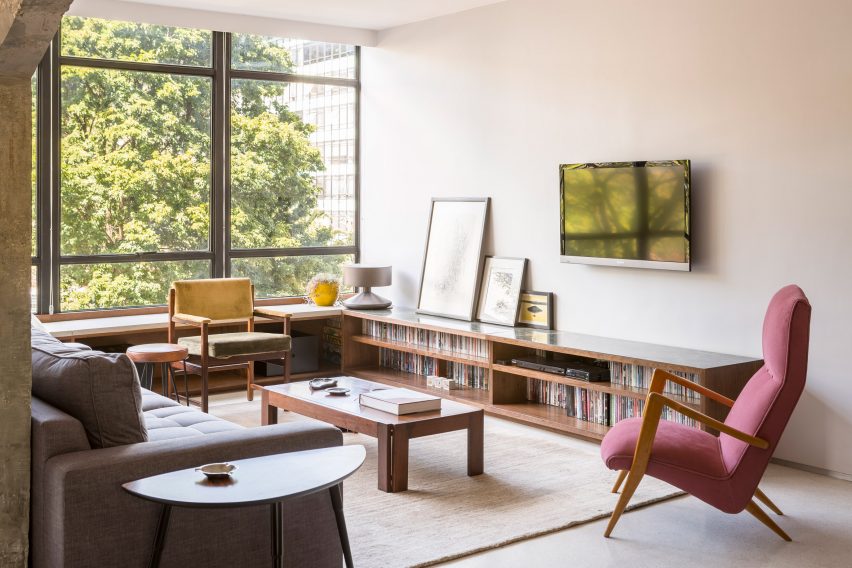 Photo is by Joana France

Local studio Debaixo do Bloco Arquitetura created an open-plan layout in this Brasília apartment, which was originally designed by Lucio Costa and Burle Marx in the 1960s.

While the studio transformed the space by cutting open its exposed concrete walls, Debaixo do Bloco Arquitetura also took care to preserve original modernist design elements such as the granilite flooring that complements low-lying wood shelving units that wrap the living room.

Find out more about this Brasília apartment › 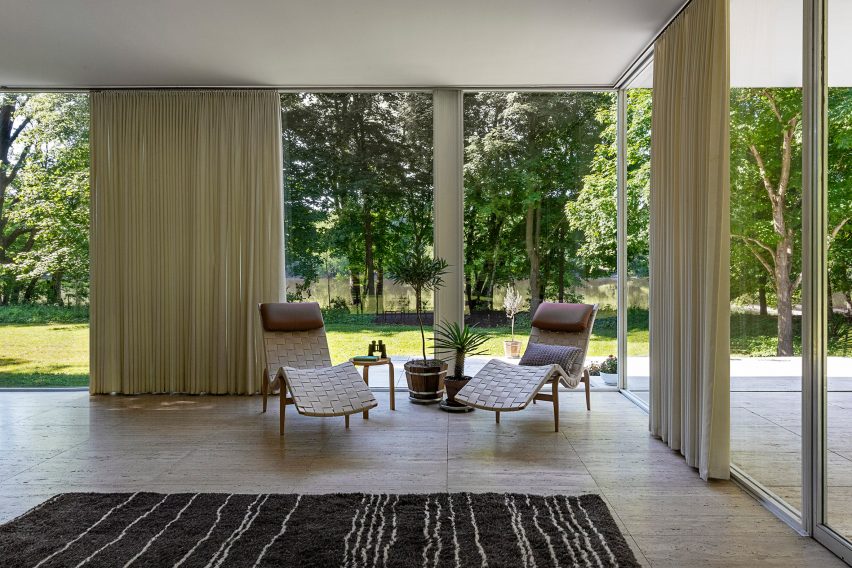 Photo is by William Zbaren

A notable example of modernist architecture, Farnsworth House is a rectilinear glass residence in Illinois that was completed by Mies van der Rohe in 1951.

In recent years, the house was redecorated for an installation that featured furnishings and personal belongings of the late research physician Edith Farnsworth, its original client.

Curvy woven lounge chairs and a black and white rug with a simple geometric pattern were placed in the spacious living room that overlooks the lush grounds.

Find out more about Farnsworth House › 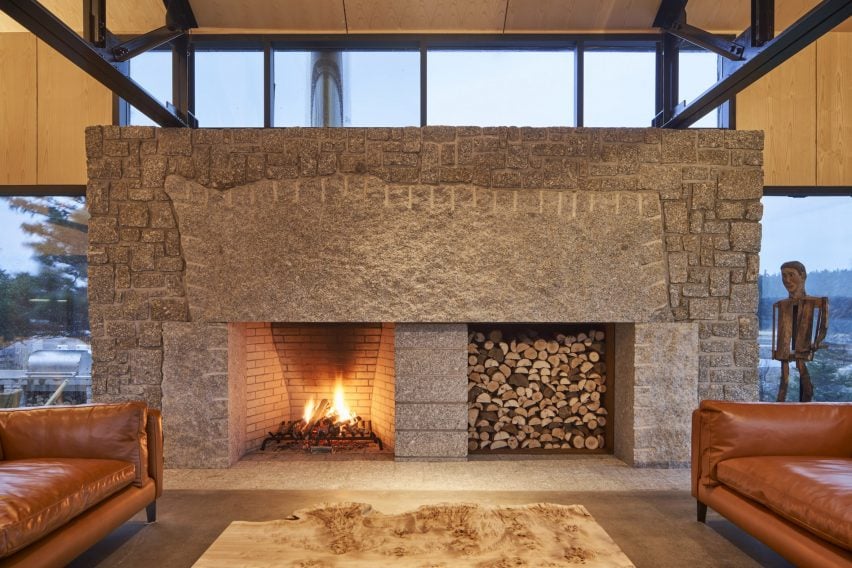 Photo is by Doublespace Photography

Main living spaces are accessed by a set of wide outside steps at Smith Residence, a cluster of gabled Corten steel structures by Canadian studio MacKay-Lyons Sweetapple that were designed to resemble traditional fishing huts.

The low-rise nature of the buildings allows for open-plan interior spaces, such as a living room complete with tan-brown leather sofas overlooked by a light-wood panelled ceiling.

Find out more about Smith Residence › 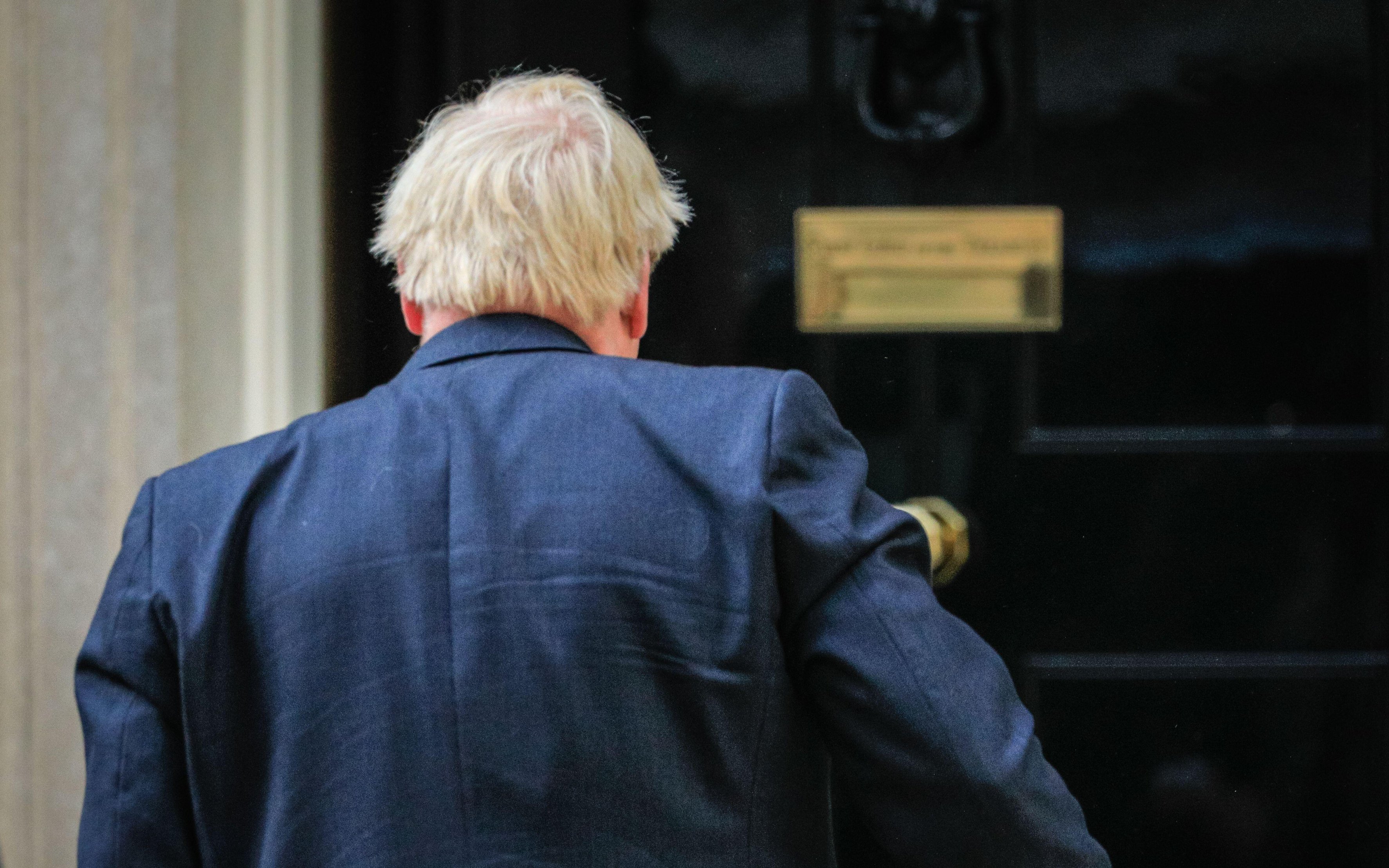