Space travel, race cars and the French Riviera are among the eclectic references that informed Snøhetta‘s design for the Moniker boutique in Oslo, Norway.

Called Moniker Fashion Universe, the 1,500-metre-square concept store is located in the heart of Oslo’s shopping district, near the newly renovated Valkyrien Square.

When the store opened last spring, its two Snøhetta-designed floors housed only womenswear. Now, sports- and menswear departments have been added on a new floor, which complements the existing interior. 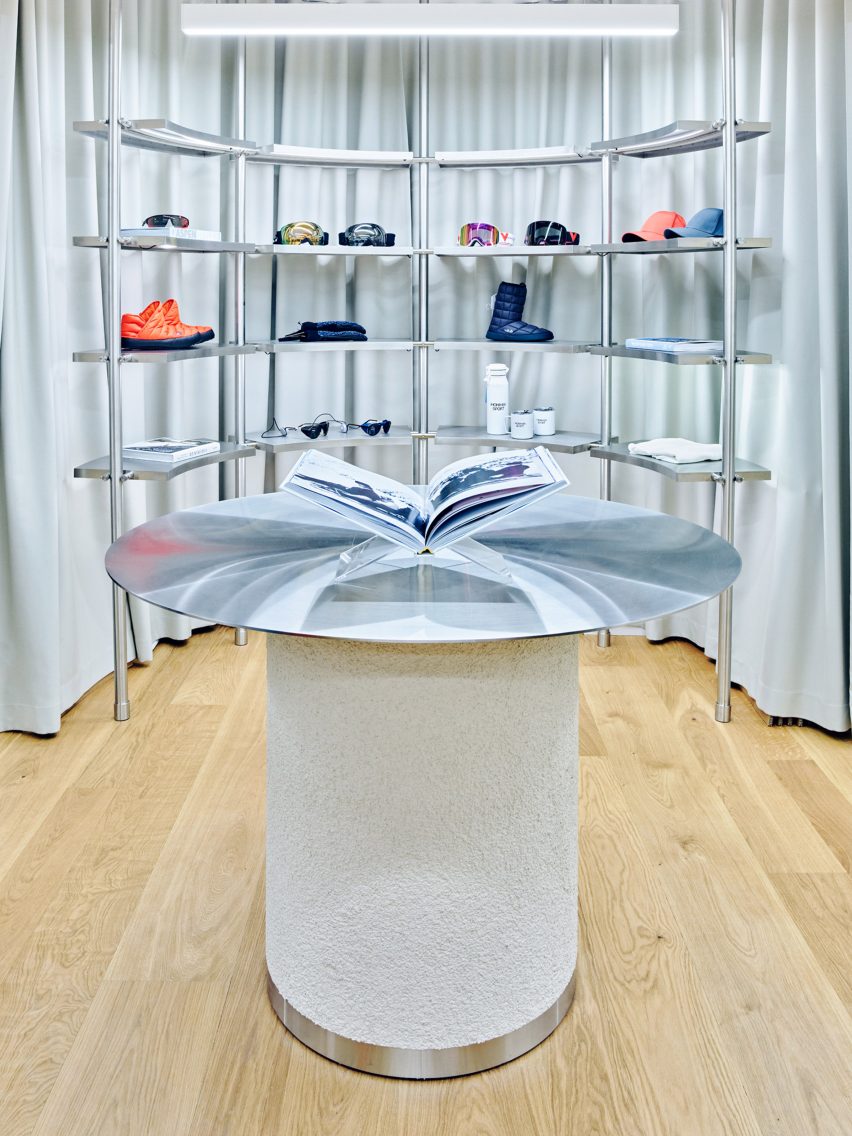 “One of the most important inputs we got from our client is that the experience of the store should be like a treasure hunt, where the customers discover new worlds of fashion around every corner,” said Snøhetta interior designer Carl Andreas Aspelund.

“This input combined with the concept of the chameleon has strongly influenced the layout of the store. Chameleons can change colours and expression but their body is always the same and recognisable, this is also true for the brand experience of Moniker,” he told Dezeen. 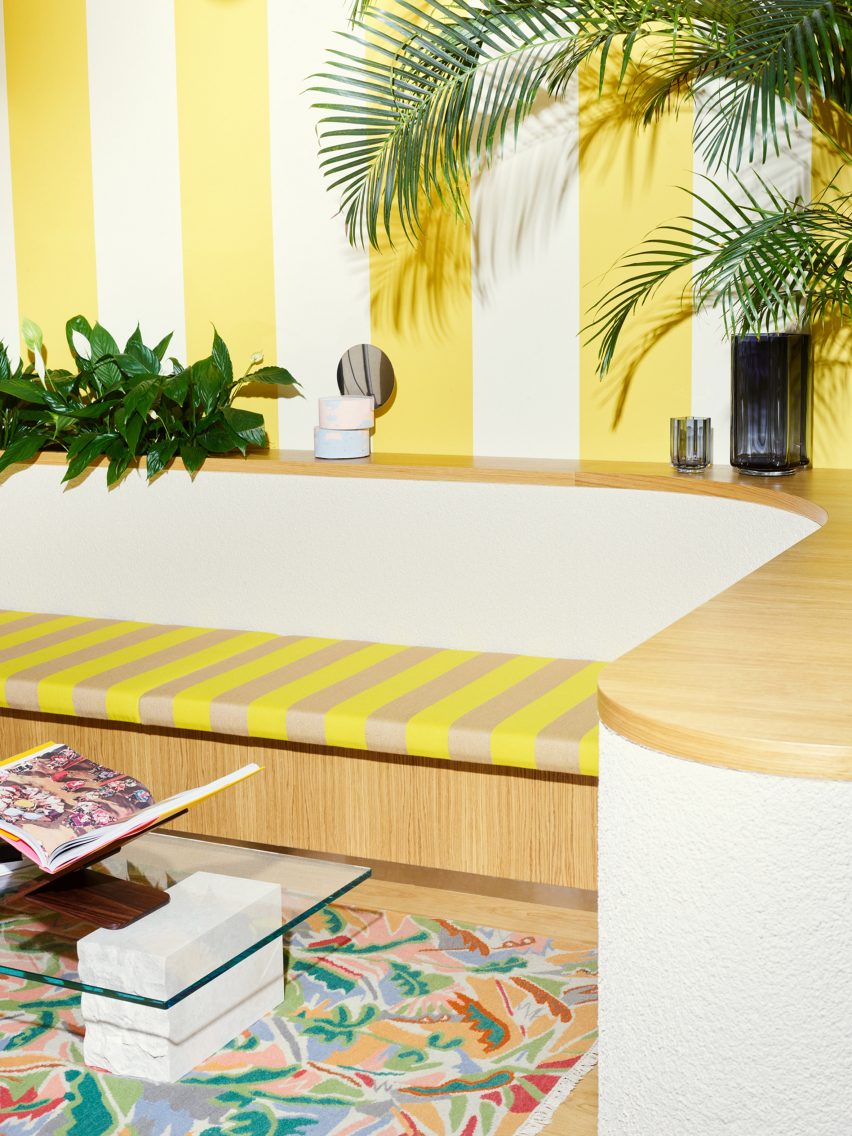 In the store, these ideas are manifested through the use of fixed partition walls, which help to break up the space and create a maze of rooms, each set within a different “visual universe”.

Just like the womenswear department, which is split into five zones that are built around five different personality traits, Moniker Man is split into two distinct zones built around the character traits of “sensitive” and “ambitious”. 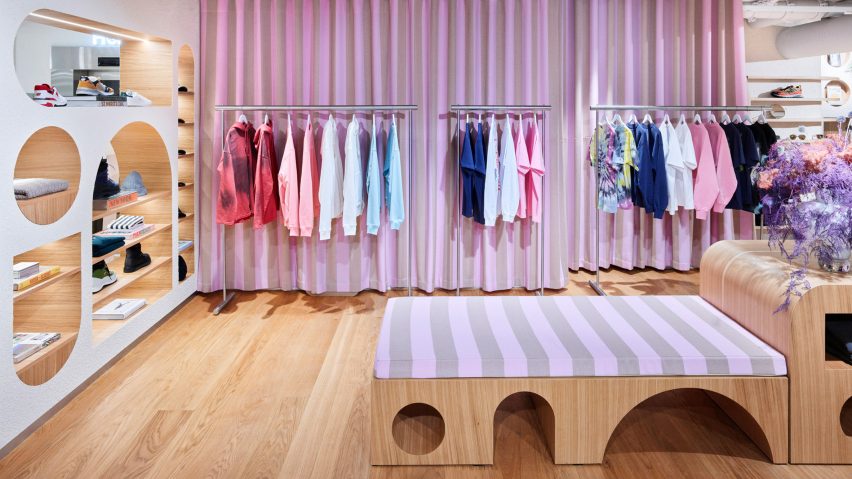 It features bold, striped fabrics in lilac and yellow

Featuring striped fabrics, plenty of foliage and a lilac and yellow colour palette, Delon’s zone takes its design cues from the French Riviera. According to the studio, the playful design of this zone is designed to “challenge our conception of what falls into the categories of feminine and masculine”. 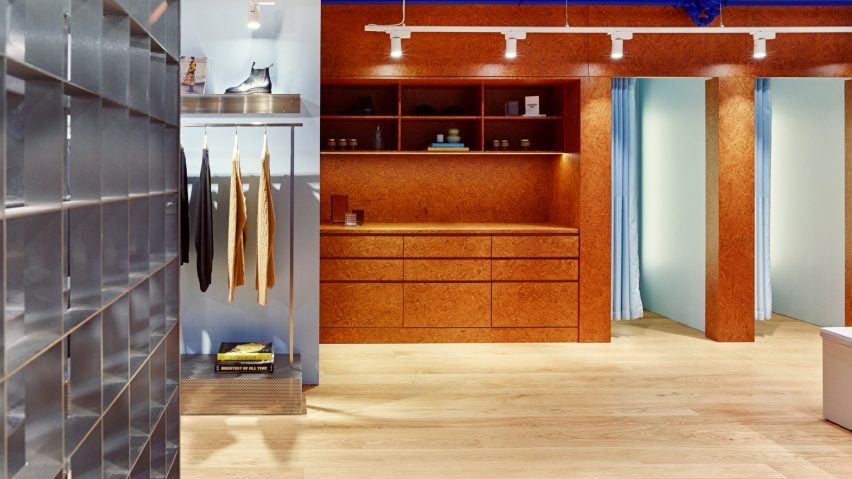 The other menswear zone pays homage to Paul Newman

In the ambitious zone, which pays homage to Paul Newman, the design team created a “classic” ambience through a luxurious material palette, with burl wood used to craft built-in cabinets and other joinery.

This is contrasted with industrial materials that nod to the racing industry, such as the perforated and gridded stainless steel sheets that form partition walls and display cabinets. 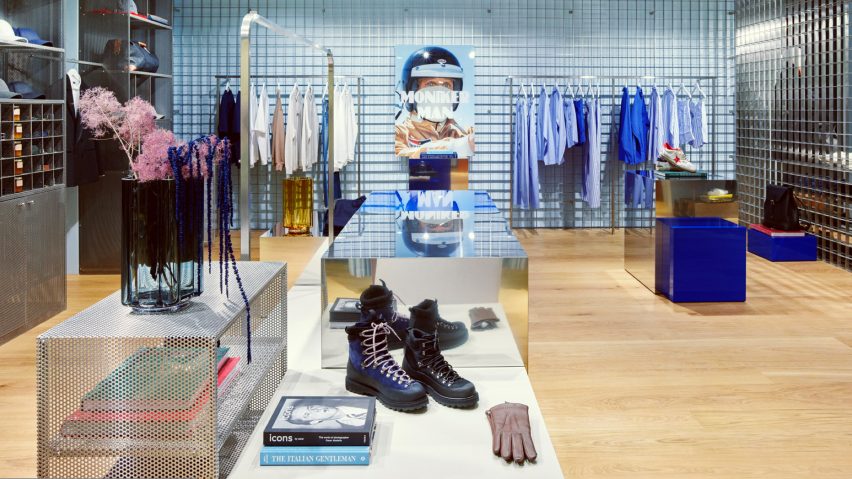 “These zones offer secluded and playful spaces for visitors to enjoy, making a visit to Moniker about more than a simple transaction, but rather an immersive experience counterpointing fast fashion and the standardisation and predictability of traditional department stores,” Snøhetta explained.

“As the lifetime of retail interiors is really short, this solution also allows for the rooms to be adapted to new trends without having to refurbish the entire store, creating a more sustainable interior solution,” Aspelund added. 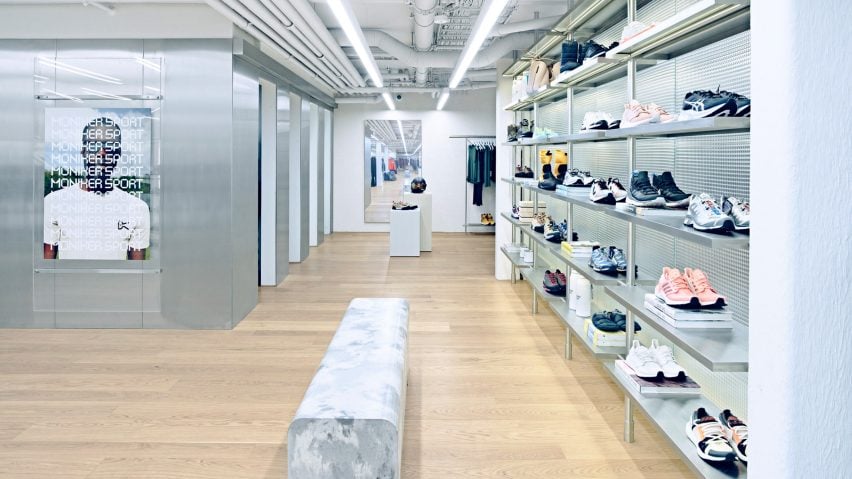 The Moniker Sport section was designed in collaboration with Pettersen & Hein

The Moniker Sports department, which sells pared-back activewear for both men and women, was informed by space travel and the astronaut couple Anne Lee Fisher and William Frederick Fisher.

During the design process, which was a collaboration with Norwegian-Danish duo Pettersen & Hein, the team also looked at NASA imagery and technical space gear for inspiration. 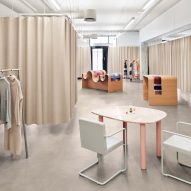 According to Snøhetta, the monotone colour scheme of this zone incorporates the six different shades of white that can be found on an astronaut’s spacesuit.

The material palette contrasts sleek, industrial details against more organic and textured surfaces, as with the brushed stainless steel display shelving that sits in front of a wall of patterned glass.

“The function of the glass is to trigger the customers’ curiosity on what they can find around the next corner,” said Aspelund. 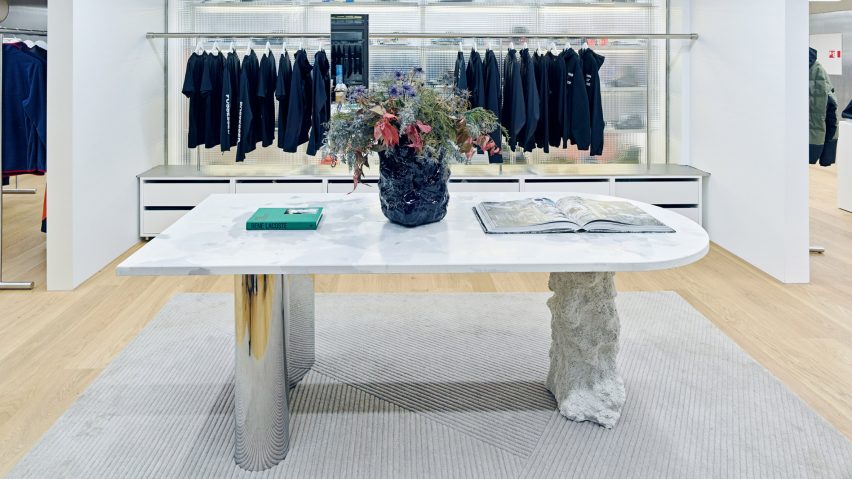 A set of pigmented concrete benches made by Pettersen & Hein sit in front of the wall, while a large concrete table with one amorphous leg and one made from polished steel stands at the centre of the space.

Another recent collaboration saw Snøhetta work with Bronx-based cooking collective Ghetto Gastro to create a jet-black eatery in Tokyo, anchored by a kitchen that resembles a theatre stage.