CHILLING new footage showing a convoy transporting equipment for Russia’s nuclear arsenal forces could be a ‘signal to the West’, a military intelligence specialist has claimed.

The footage, shot in an undisclosed location in central Russia, shows a Russia military convoy traversing a town loaded with vehicles and equipment heading towards the frontline in Ukraine.

Moscow could be signalling an escalation of its preparations for a nuclear attack in new footageCredit: Twitter/@rybar_en 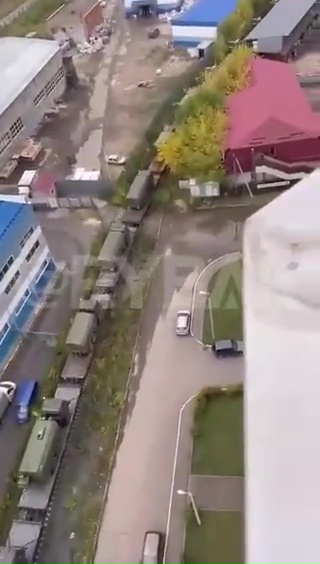 The train is linked to the Russian department responsible for the nuclear arsenal of the stateCredit: Twitter/@@rybar_en

According to defence analyst Konrad Muzyka, the train is linked to Russia’s Glavnoye Upravleniye Ministerstvo Oborony – also known as the Ministry of Defense’s 12th Main Directorate – which operates a dozen central storage facilities for nuclear weapons.

“This “another train with military equipment” is actually carrying kit belonging to the 12th Main Directorate of the Russian MoD,” Muzyka said.

“The directorate is responsible for nuclear munitions, their storage, maintenance, transport, and issuance to units.”

While the expert said the video in no way shows “preparations for a nuclear release”, he explained that the footage comes after Ukraine warned the risk of Russia using a tactical nuclear weapon was “very high”.

“It could be a form of signalling to the West that Moscow is escalating, Muzyka said, in reference to Vladimir Putin’s nuclear war warning on Friday.

Muzyka also suggested Russia could be moving this equipment ahead of training exercises for its Strategic Rocket Forces (RSVN) – the country’s main nuclear deterrence unit which form part of the Russian and Soviet Nuclear Forces.

“Russia may conduct Grom strategic deterrence exercise in October, so this train could be showing a prep for this drill,” Muzyka said, in reference to Russia’s annual large-scale manoeuvres of its strategic nuclear forces (SNF) known as Grom, or thunder.

Russian forces’ retreat from the key city of Lyman on Saturday, which had been used as a a logistics and transport hub for the Kremlin’s operations in the north of the Donetsk region, has been an embarrassment for Moscow.

Russia admitted its troops had abandoned their bastion of Lyman to avoid being encircled by Ukraine’s army.

Russia has the world’s largest atomic arsenal – including low-yield tactical nuclear weapons designed to be deployed against opposing armies.

Other top Putin allies, including former president Dmitry Medvedev, have suggested Russia may need to resort to nuclear weapons – but Kadyrov’s call was the most urgent and explicit.

The ominous sequence, which was aired by pro-Kremlin broadcaster NTV, showed nuclear explosions and the “Armageddon” aftermath of the blasts.

NTV is owned by the media wing of energy giant Gazprom, who last month released a video of Europe “freezing to death” without Russian gas in a bid to taunt the West.

The latest chilling segment was entitled “In anticipation of nuclear conflict – how weapons of mass destruction have become part of the geopolitical game”.