CHILLING CCTV shows a man skulking close to a cemetery where a 13-year-old girl was raped as she walked home from school.

The teen was alone in Retford, Notts, when she was ambushed by a stranger who threatened her with a knife.

Police are hoping to speak to this man following the attackCredit: SWNS

She was then forced off the path into trees and attacked.

Police have now released CCTV of a man they wish to speak to in a fresh bid to catch the culprit.

It shows the figure walking with his hood up near to the cemetery around the time the girl was raped. 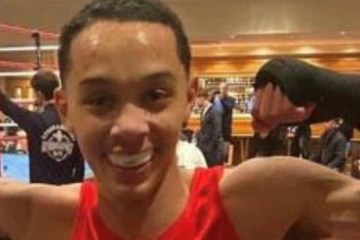 Officers confirmed the horror attack took place at around 3.30pm on Thursday 12 December 2019 – the date of the general election.

The girl’s mum revealed her guilt at the ordeal on Crimewatch Live as daughter was walking home because she was too late to pick her up from school.

She said: “It feels like my fault because I was five minutes late.

“If I was on time she wouldn’t have been hurt, I blame myself.”

The mum also said “what happened took that 13-year-old girl away”.

Senior Investigating Officer, Detective Inspector Craig Hall, said the date might “stick in people’s minds” due to the vote.

He appealed for anyone who anything suspicious in the area or who knows the attacker to come forward.

While Lydia Patsalides, East Midlands Regional Manager at Crimestoppers, said: “This is an awful, heinous crime which should never have happened.

“An innocent child has gone through a terrible ordeal which may sadly affect her for the rest of her life.

“We know it can be difficult to speak up about someone you suspect may be involved in a serious crime, especially if they are close to you. This is why our charity is here to help.”

Anyone with information should call Crimestoppers anonymously on 0800 555111 or visit www.crimestoppers-uk.org.