Craig wants to shine a light on how difficult it is to survive on such a small amount (Picture: Craig Harker/SWNS)

A pub landlord lived off £1 a day for food for a week in a bid to raise awareness on how rising costs are impacting people’s quality of life.

Craig Harker, 35, decided to take on the challenge that thousands are currently facing with the cost of living crisis and bought all his food shopping for less than the cost of a Big Mac Meal.

The landlord from Stockton on Tees, is used to spending £200 a week on food – but spent a week feeding himself a fraction on just £1 a day – £5 a week.

The father-of-three admits his experiment ‘has not been a case of living – but surviving’.

Craig, who runs his chain of George Pub & Grill venues across Teeside, says: ‘The rising costs of everything has been popping up on social media and on the news everywhere. 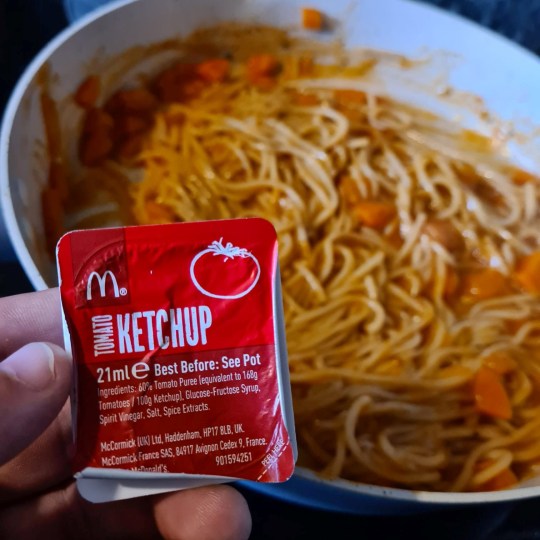 Craig had to get creative (Picture: Craig Harker/SWNS)

‘People are cutting back on everything and almost every person is feeling it. Everyone is saying we need to budget – and then the Tory MP came out with his thoughts on the matter, but I wanted to find out my own answer.’

From cutting out meat and diary, stocking up on carbs and getting free sauces from fast food chains, Craig has stuck to his budget meticulously.

He has also lost a significant amount of weight in his brief budgeting journey losing eight pounds in the space of a week.

Craig has used his experience to share his top tips for successful budgeting and says preparation is key.

‘What I’ve been doing is not a healthy diet but I’m trying to show people that you can survive on that budget,’ he says. 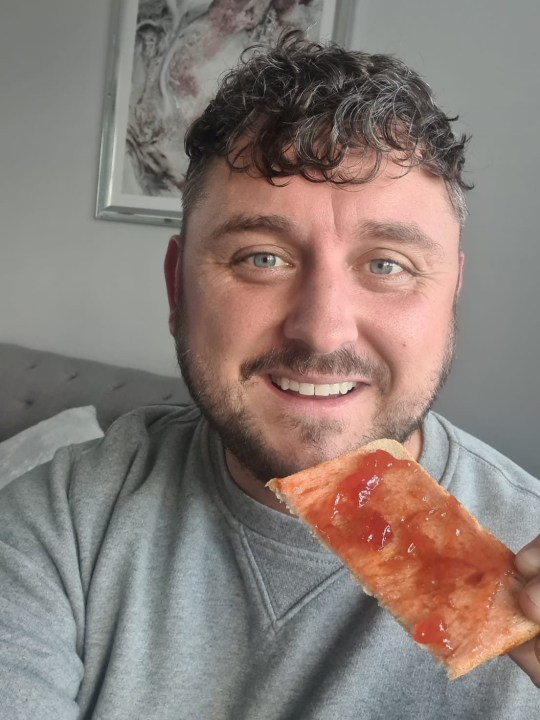 ‘People are cutting back on everything and almost every person is feeling it’ (Picture: Craig Harker/SWNS)

‘Everyone is struggling to get out of this difficult financial situation but if you are on a budget of feeding your family for £5 a week – there are ways you can eat.

‘But luckily for me my Dad was a chef and I am not in a vulnerable position. No one in the UK should live like this.

‘This experience has made me feel really grateful and appreciate what I’ve got and it has taught me a lot of lessons I’ll be implementing into my life moving forward.’

Craig shared his experiences of his pub’s Facebook page.

On the first day of his challenge, he admitted: ‘After visiting the first supermarket this is already going to be a lot more difficult than I thought.

An average day of eating for Craig normally would consist of a full English breakfast, a packet of biscuits with tea or coffee, a burger for lunch and dinner from a fast food chain, like McDonalds or KFC. 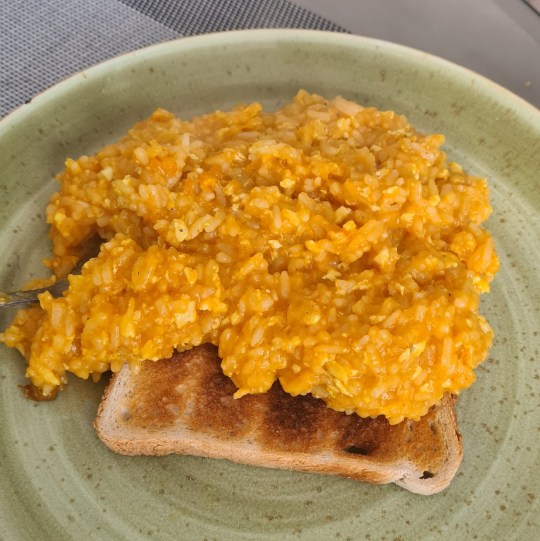 Craig lost eight pounds in the space of a week (Picture: Craig Harker/SWNS)

This week, however, he left his luxuries behind and regimentally stuck to a whole new way of eating – that even included asking for spices and sauces from drive-throughs.

Craig included a sachet of porridge for breakfast which he got for 79p from Aldi, a cup of tea, rice and curry sauce and spaghetti Bolognese.

Having finished his experiment today (20 May), Craig says a favourite meal of his this week was a jacket potato with hoops and grated carrot on the side.

He adds: ‘I bought the porridge sachets because I knew I was only doing this for five days but if I was doing it for longer I would have bought a full bag of oats which would have lasted much longer.

‘The cup of tea was 29p from ASDA for 40 tea bags, I used the milk which I got from Maccies for free.

‘I took the hit on buying diary and meat and went to drive-throughs where I asked them for salt, pepper, sweet curry sauce, sweet chilli sauce.

‘I tried to find the cheapest options possible – everything I bought didn’t look like a meal, the nutritional value was not great but it’s what you do with it that matters.

‘I also got a free burger from Burger King who were giving them out this week, and took it home, diced it up and used the ingredients to make a spag bog. I was being creative and using what was there at my disposal – anyone can do any of these at any point. 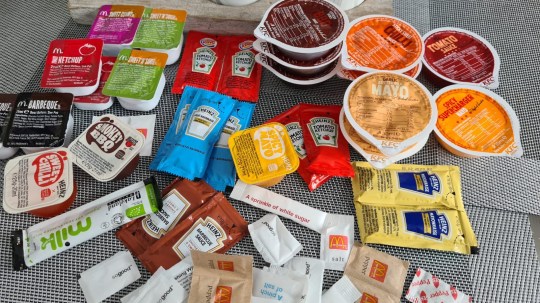 He stocked up on sauces, spices and dairy from takeaways (Picture: Craig Harker/SWNS)

‘Asda is great for budget line sauces, Morrisons do eggs for 50p and you can check out bargains online and on O2 priorities particularly.’

Craig says the key is being prepared and the freezer is your best friend, his advice is to bulk cook meals and freeze them.

‘If you bulk cook real dishes like soups, casseroles, curries – over long periods of time that is the best option financially,’ he says.

‘There are so many little things you can change too that make a difference – like when boiling the kettle, just fill it up to one cup every time – not the whole thing.’

The father also revealed his experiment exposed not only the difficulties with food, but also maintaining a social life. 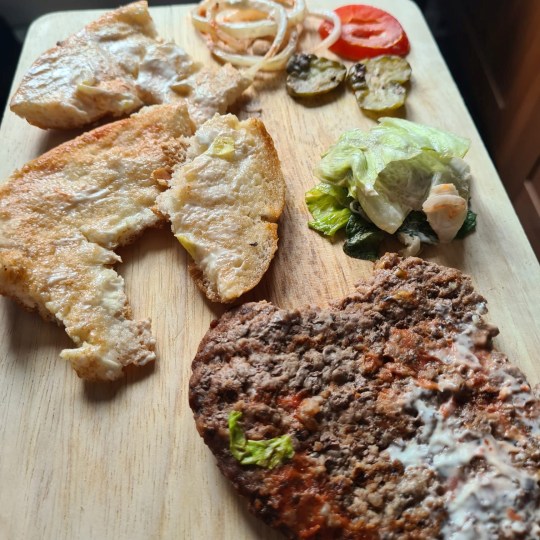 Craig got a free burger from Burger King and used it make a spag bol (Picture: Craig Harker/SWNS)

‘There are only so many times you can go to the pub and ask for water!’ he says.

Before starting his project, Craig completed hours worth of research into supermarkets, but found the increasing cost of budget line products a issue when shopping.

‘If people were taught how to budget I think it would make a big difference,’ says Craig. ‘Everyone should be taught cooking lessons, but the reality is £5 does not stretch that far at all.

‘I cut back on everything I really liked this week and went into complete survival mode – no one should have to live like that. 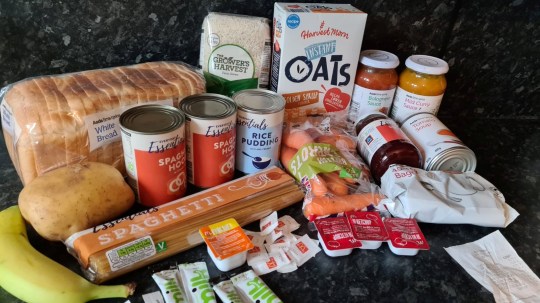 Craig says cooking in bulk and freezing portions is your most economical option (Picture: Craig Harker/SWNS)

‘The results from this experiment show this issue is bigger than just food. It is more about the debate on society – we need to make sure the most vulnerable people who have the least amount of income are supported.

‘If you have extra money you should donate to food banks, it makes such a difference and stay away from the discounted isles because you could be taking food away from someone who needs it more.’

Since finishing his experiment, Craig celebrated in style by buying a whole trolley of food and donating it to his local foodbank.

‘I want to help others now that I’ve experienced first hand how difficult it can be on a low budget,’ he says.

‘I’m feeling so grateful for everything I have but no one day budgeting like this week could be a possibility and take nothing for granted. Its been a real eye opening and no one should be forced to survive on what I’ve had.’