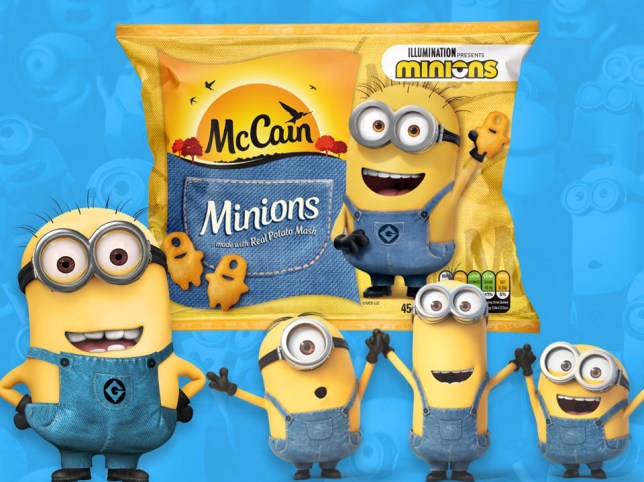 Get your Minion fix in potato form (Picture: Getty/McCain)

Potato smiles were the staple of many of our childhood meals, but things need to move with the time and they’re doing just that.

McCain has announced the launch of the new kid on the block; potato Minions.

Minions came to prominence after the hit childrens’ film Despicable Me, and have found themselves on everything from furniture to mums’ Facebook walls.

Now, they’ve been formed into figures from mashed potato and prepared using sunflower oil for a crunchy side dish that reminds you of those little scamps.

The brand new potato bites launched yesterday exclusively at Tesco, as part of a partnership between McCain and Universal.

They retail for £1.79 for a 454g bag, the same cost as the traditional mashed potato smiles.

As ever, they’ll also include no artificial colours of preservatives.

Minion food appears to have popped off in the last few years. Shoppers here in the UK can already get their hands on spaghetti hoops and cupcake mix inspired by the yellow mischief-makers.

The Descpicable Me machine keeps on turning, with everything from ice lollies at Asda to Yoplait yoghurts in the States.

As any fan of the films will know, Minions’ favourite food is bananas. Since they’re yellow, and the skin is peeled off before eating, you could easily just Minion-ify your child’s healthy snack with a pen.

Given Minions love to follow rules (however sloppily) and eat their fruit, incorporating them into your little one’s eating routine might be a good way to have some fun and encourage healthy eating.