A WOMAN was heartbroken after her crush edited a photo of her to make her thinner – and then had the nerve to send it to her.

She claimed the bloke, who’d she’d fancied for years, was normally ‘sweet’, but things turned sour after he photoshopped an image of her. 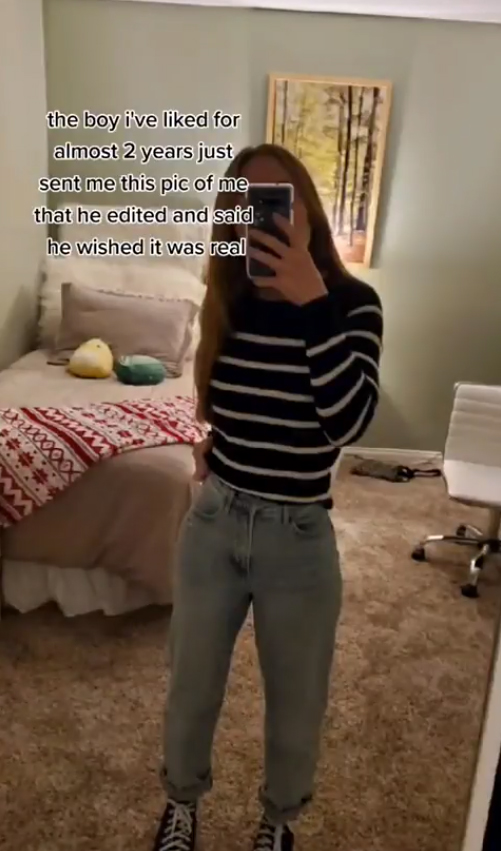 A woman shared the snap her crush edited of her – to make her waist unnaturally smallCredit: TikTok

The singleton shared the image on TikTok, showing herself taking a full-length selfie in front of the mirror – with an extremely tiny waist.

She said: “He’s usually so sweet too but the last few weeks he’s been becoming kinda a jerk.

“Boy I’ve liked for almost two years just sent me this pic of me he edited and said he wished it was real.”

She then shows the original, unedited photo, where she looks healthy and happy. 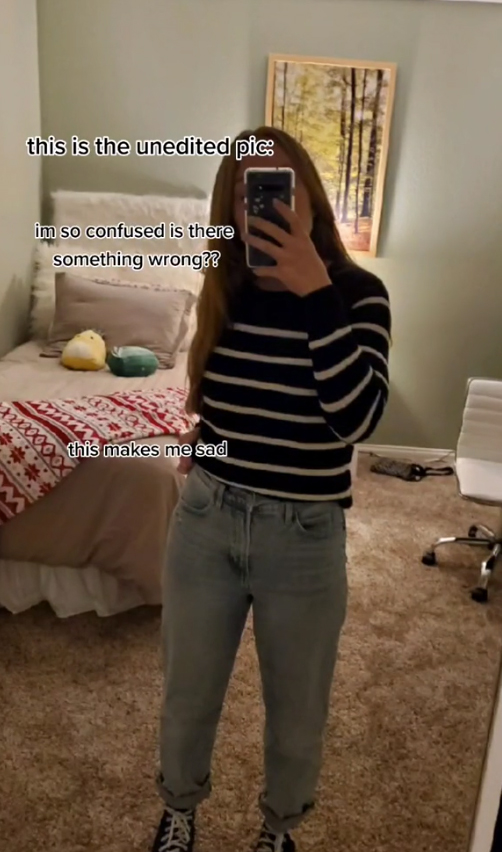 She shared the photo online alongside the original, sadly asking what was ‘wrong’ with herCredit: TikTok

Heartbroken, she added: “This is the unedited pic. I’m so confused is there something wrong?

“This makes me sad.”

The bloke’s cruel actions have caused an outpouring of anger, as women urged her to cut ties with him as the clip racked up two million views.

I’m so confused is there something wrong?

One person said: “Don’t listen to him, you’re perfect just the way you are.”

Another fumed: “Never talk to that man again.”

A third pointed out: “You look way better than the original? You look awesome what’s his point.”

This person wrote: “You’re gorgeous ma’am there’s something wrong with him what gives him the right? Ugh pathetic. You’re a baddie and so pretty.”

While another suggested: “Send an edit back, taller, completely different face etc. Hit all the insecurities & the block him because he toxic & you deserve.”

Luckily after showing off his poor photoshop skills, the woman said she ‘lost feelings fast’ for the bloke.

Meanwhile this woman keeps sex spreadsheet on EVERYONE she’s hooked up with & ‘data analysis’ shows it’s good news if you get to date 4.

Plus this girlfriend had no idea she’d been secretly wearing her engagement ring for nearly TWO YEARS.

And this woman confronts cheating boyfriend by printing out his texts to other girls after he claimed she’d DIED.