A BAD break-up is hard all round but, while some people choose to take the high ground, others have different ideas.

Annabelle Mackay learned that her ex-boyfriend was in the “low ground” camp when she reminded him that he owed her some money.

Annabelle was not impressed when her ex paid her back the money he owed her in penniesCredit: TikTok/@annabellemackay 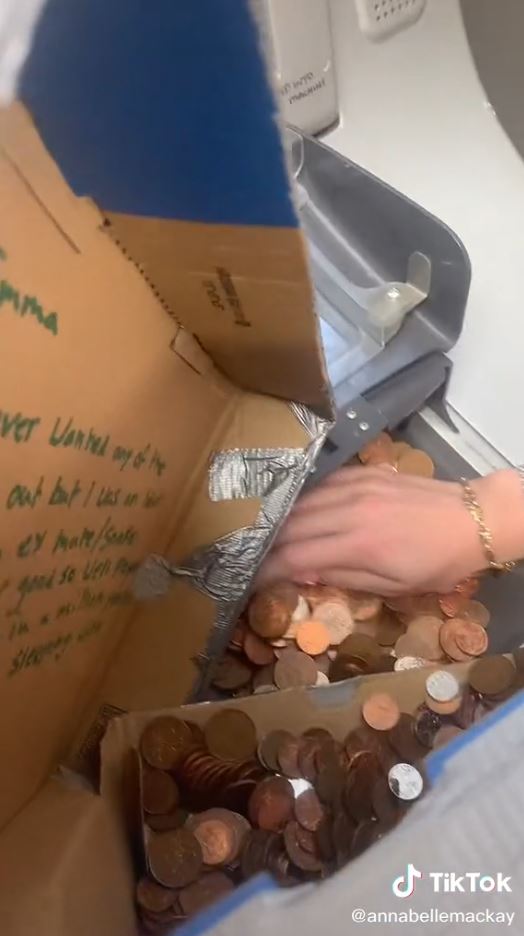 The TikToker took her box of change to the coin exchangeCredit: TikTok/@annabellemackay

Her former-partner decided that he would return the cash she called in, but came up with a creative way to pay her back.

Most people opt for a bank transfer or maybe withdraw some notes from the cashpoint when they need to reimburse someone.

But Annabelle’s ex decided he would pay back what he owed by handing over a shoe box full of copper coins.

Despite the frustration of the transaction, Annabelle was able to laugh about the prank so took the box to a money counting machine.

She documented the outing on TikTok, uploading a short clip of her cashing in her pennies.

She captioned the video: “When your petty ex owes you money.”

After pouring her mass of coins into the machine, Annabelle’s grand total was £51.37.

The jokey video has been viewed more than 2.3 million times and has more than 290k likes on the popular social media platform.

Fellow TikTokers were quick to jump in with their thoughts on her ex’s antics.

One said: “Joke’s on them because they counted it.”

While another agreed: “How embarrassing that they had to find/exchange all the pennies to give you.”

A third said: “Imagine wasting that much effort just to be petty.”

But not everyone was on team Annabelle.

And another commented: “Your ex is an evil genius.”

In other news this woman took to the internet to vent about a guy who checked her underarms to see if she shaved them.

While another person recounted a date during which a guy walked her around the mall telling her how to dress.

And this woman had the most uncomfortable date – the bloke she was with sobbed about his ex and drank a bottle of wine… and that’s not even the worst part.