A MUM has slammed a “condescending” guide for beans on toast given to her in an “insulting” school meal box.

Rachel Robley was told how to use beans, toast and spread for her six-year-old daughter Hope’s lunch in the box intended to replace school meals during lockdown.

Rachel Robley was told how to use beans, toast and spread for her daughter’s lunchCredit: NCJ MEDIA 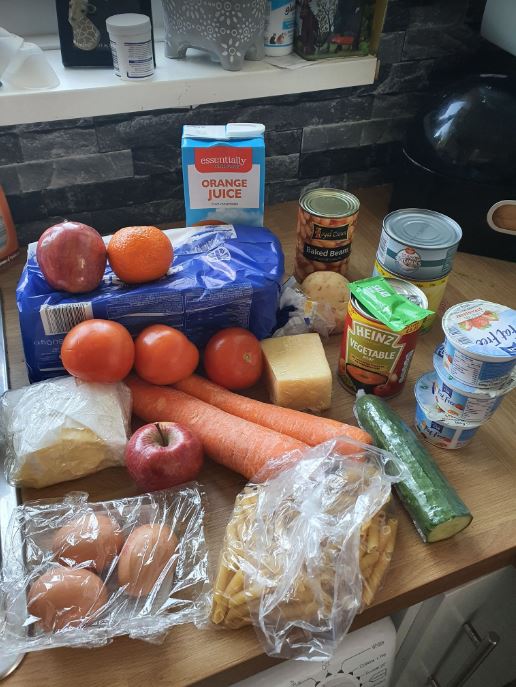 The mum received a food parcel along with the condescending adviceCredit: NCJ MEDIA

It follows an outpouring of fury after photos of meagre food parcels sent out by school meals supplier Chartwells circulated online.

The Government buckled under pressure yesterday, announcing that a voucher system will return to replace the parcels.

But Rachel, along with several other angry parents of Tyneside, have revealed their fury at the quality of the food which officials insist should have contained around £30 worth of groceries, the Chronicle Live reports.

“We tried working it out last night and if we were being generous, it still doesn’t go over a tenner.

“The whole thing is infuriating.”

And her anger was amplified when she opened the package to find the “condescending” guidance which tells parents what is needed for each meal.

For beans on toast, parents are advised to use bread, baked beans and spread.

Rachel added: “For me it certainly adds insult to injury.”

A number of other parents from the North East have also criticised the apparent £30 cost.

One mum, Jessica Wright, 30, said she was expected to feed her 12-year-old son with a package that contained little more than bread, milk, tuna fruit and veg and some spuds.

It feels like an insult to parents, and we know what our children want to eat, so why not just give vouchers and we can decide?

She said: “When he is at school, he has a choice of snacks or drinks, but half the stuff in the box he wouldn’t actually eat.

“It feels like an insult to parents, and we know what our children want to eat, so why not just give vouchers and we can decide?

“I mean, what sort of meal can you get out of a carrot?”

Another mum from Newcastle, who asked not to be named, said the five-day parcel she received for her 12-year-old son was “shocking.”

The package contained a loaf of brown bread, a tin of tuna, two tins of baked beans, a sandwich bag with a “small amount” of grated cheese, a plastic bag with pasta in, a large tin of peeled tomatoes, a lettuce, a cucumber, three tomatoes, three potatoes, two carrots, two yogurts, two satsumas, two apples and two small chocolate muffins.

She said: “One tin of tuna only does my son two days – he doesn’t eat beans, he doesn’t like tomatoes, he only eats lettuce out of all the salad stuff and please tell me what do you do with three small potatoes and two carrots?

“The pasta there is nothing to put with it – they have been badly thought through.

“The overall content won’t do five days and will not cost more than £5, if that.”

It comes after Marcus Rashford held a call with Boris Johnson yesterday over “scandalously inadequate” food parcels sent to parents.

The Manchester United footballer – who forced the Government into a u-turn on feeding the UK’s most vulnerable kids during lockdown – said free school meal vouchers will return next week as a result.

I don’t think anybody is happy with the disgraceful images that we’ve seen the food parcels that have been offered, they are appalling and they are an insult to families.

He added that the PM has also ordered an investigation into the deliveries.

Parents will be able to get £15-worth of vouchers to use at supermarkets or continue to use the food parcels system that Mr Johnson has vowed to improve.

During Prime Minister’s Questions, Mr Johnson said yesterday: “I don’t think anybody is happy with the disgraceful images that we’ve seen the food parcels that have been offered, they are appalling and they are an insult to families.”

“I’m grateful by the way to Marcus Rashford has highlighted the issue and is doing quite an effective job by comparison with (Sir Keir Starmer) in holding the Government to account for these issues.

“The company in question has rightly apologised and agreed to reimburse.”

And blasting the parcels as “disgraceful”, he fumed: “It’s not good enough.

“You can’t assume households have other ingredients to make the lunches and clearly the packages were totally and woefully inaccurate.”

The Sun Online has approached meal providers Chartwells for comment.