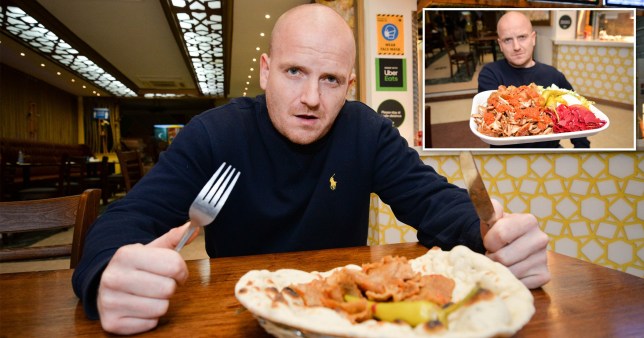 Dad Des Breakey is quite the kebab enthusiast.

The 34-year-old from Newton Heath, Manchester, is planning to eat 60 kebabs in 30 days for charity.

The kebab lover will be taking on the challenge to help Nerve Tumours UK – a charity which supports his ten-year-old daughter.

He hopes he can donate least £1,000 for Nerve Tumours UK, which raises awareness of the rare conditions Neurofibromatosis and Schwannomatosis.

‘I’ve been training for this since I was six-years-old. I know I can do it,’ says Des.

‘It’s a charity close to my heart, so hopefully I can help them out.’

Des decided to take on the unusual challenge after realising that his
kebab intake was greater than most. 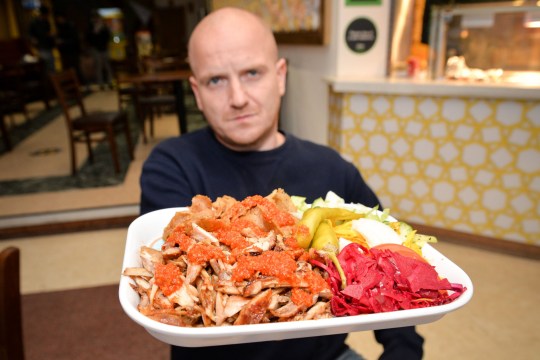 He’s planning to eat 60 of these this month (Picture: Anthony Moss/MEN)

When he realised he had inadvertently scoffed 39 kebabs in a
28-day period a couple of months ago, his pals encouraged him to go
even further.

He said: ‘I’ve been on that group for about four months and I’ve reviewed 82
kebabs.

‘After that I thought, I might as well do it properly and do it for charity.’

Photographer Des admits he does not know how many calories he will
take on during the mega eating challenge, but he’s not overly
concerned about the consequences.

He’ll need to chow down on at least two of the meat-laden treats a day
if he’s going to finish on time.

He added: ‘I’ve had two today already, but that’s all part of my training. I’m just psyching myself up.

‘I’m not too worried. I have been doing this forever and I’m still standing. I’d better do it while I’m young and healthy. 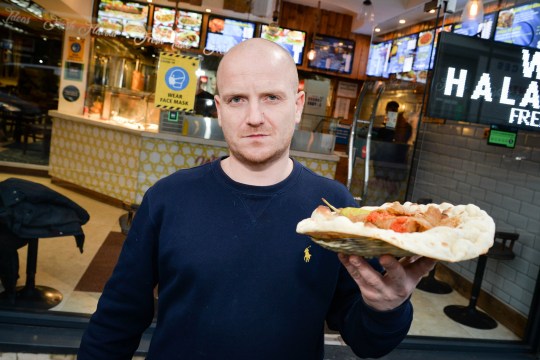 Despite having done a number of charity fundraising events in the
past, Des says he has never been tempted to compete in an actual
marathon.

For now he’s happy with his kebabathon.

He continued: ‘I do have my favourite haunts but I’ll be trying lots of
different places. Levenshulme Bakery is great, Red Cherry, Rusholme
Chippy – there are loads.

‘The perfect kebab, in my opinion, needs quality meat, the bread has to
be fresh and made in a clay oven, fresh in-house sauce and fresh
salad.

‘I will never get sick of kebabs. They feed my soul.’

You can donate to the charity via its JustGiving page.