‘Age is just a number to us, and you can’t help who you fall in love with’ (Picture: SWNS)

A 48-year-old man expecting a baby with his 29-year-old wife has been shocked to find he actually saw her for the very first time when she was a baby.

By October, they realised their attraction to each other was too strong to deny, despite the age gap.

When Rich was introduced to Evie’s mum, Sarah, who’s 53, he was shocked to realise he’d actually met her before.

Sarah and Rich had worked on the same street as each other in the 90s, which means Rich would almost certainly have seen Evie being pushed around by her mum in a pram.

Rich, a surveyor, from Stafford, Staffordshire, said: ‘It was a bit freaky when I realised I’d met Evie as a baby, but I had no idea at the time. 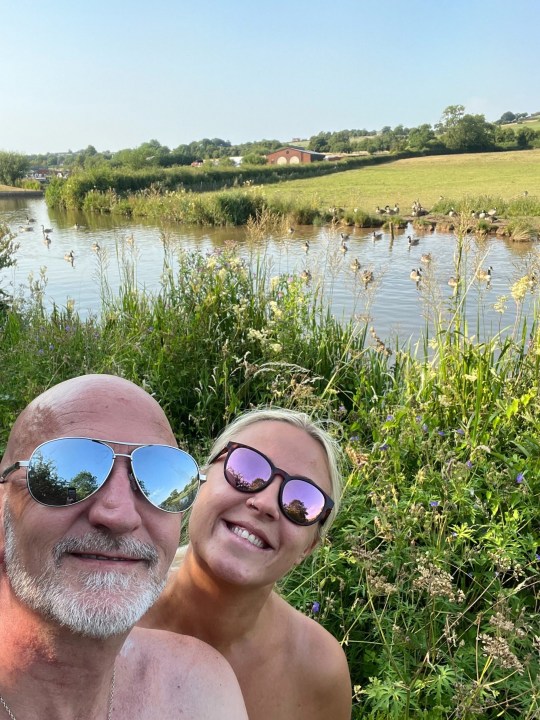 ‘We just laugh about it.

‘Age is just a number to us, and you can’t help who you fall in love with.

‘I’ve been mistaken for Evie’s dad before, but most people can see how well we click. The 19-year age gap doesn’t bother us at all.’

They moved in together in February 2019, and Rich popped the question in the following later that year.

With the support of their families, the pair wed in July 2022, with rich describing it as ‘the best day of my life’, and they are now expecting a baby of their own.

Evie, a social worker, said: ‘It was a bit odd when we worked out Rich had met me when I was a baby.

‘He’s so fun and has the biggest heart. 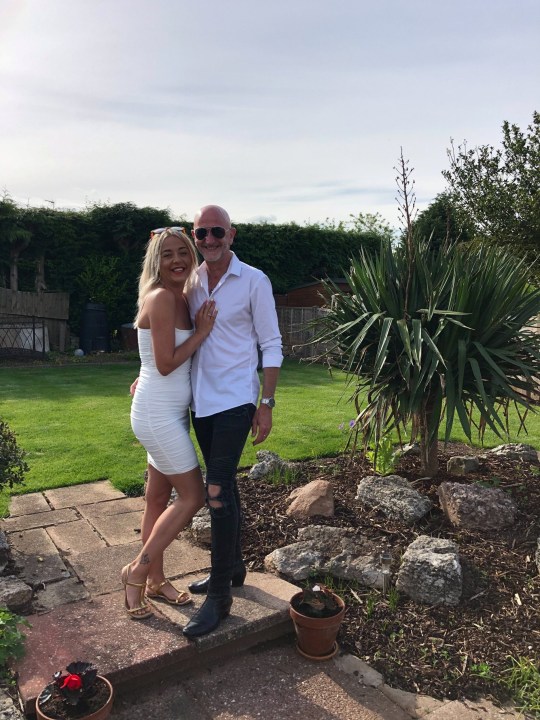 ‘When we’re together you can’t really tell we’ve got a big age gap – apart from Rich’s grey beard.

‘He’s going to be a great father.’

Even though they initially didn’t think a relationship would blossom, they instantly clicked when they met.

‘I was just drawn to him from our first conversation.’

‘We really hit it off,’ Rich said.

‘I invited her to get involved with a big charity event I was doing so we could keep in touch.’ 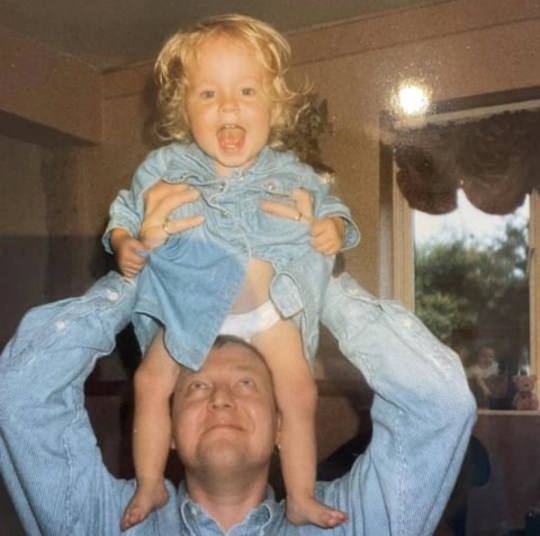 The pair kept meeting up at the pub where they first saw each other, and Rich realised he was smitten when she went away on holiday.

‘I realised I really missed her and was worried about her when she was away,’ he said.

‘I told her when she came back, and she said she felt the same.’

Rich popped the question in front of 1,000 people at their local theatre, during a showing of a documentary on the charity event he had put on in March 2019. 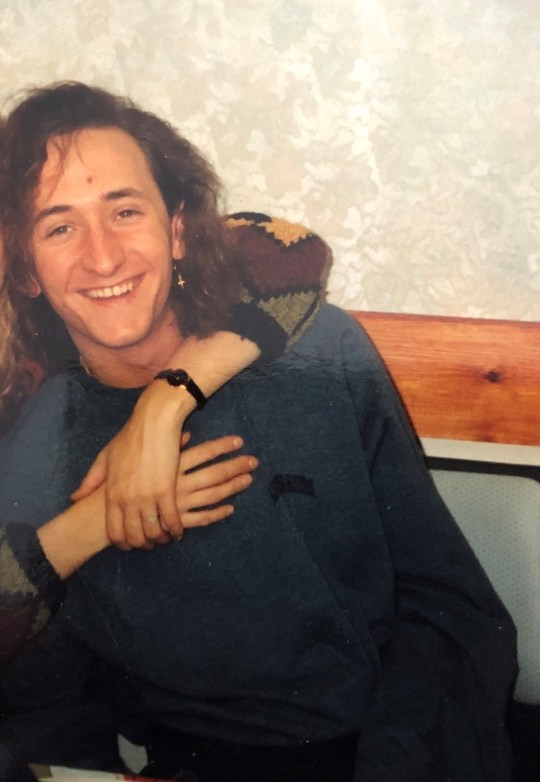 Even though the pair has support from both their families, they still have to field some awkward questions from the public.

‘A woman asked if I was with my dad once,’ Evie said.

‘But it wasn’t malicious, and I think she was mortified when I told her it was my boyfriend.’

The couple has also had to deal with more than their fair share of tragedies over the years they’ve been together.

First, Rich’s dad was diagnosed with cancer and passed away at Christmastime in 2018.

Then, Evie suddenly lost her dad, Martyn Locke, 60, in July 2021. This loss, combined with the covid restrictions in place at the time, led her and Rich to postpone their wedding.

‘I couldn’t bear the thought of not having my dad there to walk me down the aisle,’ she said.

Then, in October 2021, Rich suffered another blow when he lost his mum, Nicole Tomkinson.

After these rocky months, they were at last able to celebrate their wedding day with an intimate ceremony followed by a big party in a friend’s field with over 200 guests. 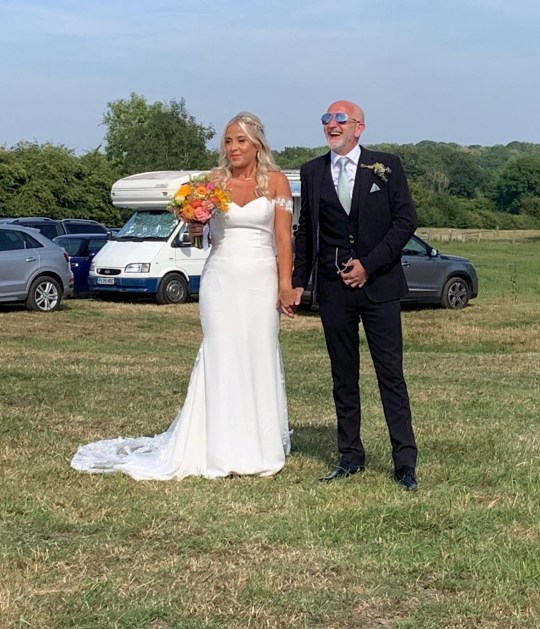 ‘Rich is still a fit and healthy man and I know he’s going to be a hands-on dad’ (Picture: Rich Foetu Tomkinson / SWNS)

‘Our family and friends have always been supportive, and they can see how happy we are.

‘At the beginning, I don’t think anyone expected we would last – even us – but now we’re happily married and expecting a little one.’

‘My parents have always been supportive of Rich as they could see he made me happy,’ Evie said.

‘I’d been in turbulent relationships before, so they could see that he was a genuinely good person who had a lot of love for their daughter.’

As part of the light at the end of the tunnel of all their grief, they found out they were expecting in May 2022.

‘We had been trying for a few months,’ Rich said. 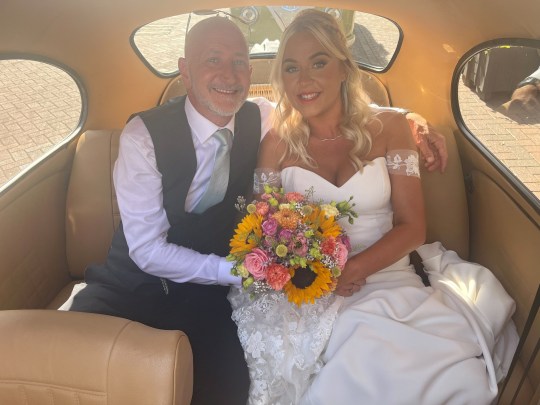 ‘I was worried it might be hard to get pregnant because of Rich’s age,’ Evie said.

‘So, we were so excited when we found out. Rich sobbed his eyes out.’

Now, the future family of three are looking forward to travelling in their converted van.

‘Rich is still a fit and healthy man and I know he’s going to be a hands-on dad,’ Evie said.

‘His age isn’t going to affect him as a father – I know he’s going to be amazing.’

‘We’ve already thought about people thinking I’m the grandad rather than the dad at sports days and things like that,’ Rich said.