ARSENAL outcast Lucas Torreira has revealed he has NO chance of staying at the club after being brutally told there is no place for him in Mikel Arteta’s side.

The 26-year-old has spent the last two years out on loan at Atletico Madrid and Fiorentina respectively.

Lucas Torreira has revealed he wishes to leave Arsenal this summer on a permanent dealCredit: Getty

Torreira was keen for his temporary stay in Florence to be turned into a permanent switch.

But the Serie A outfit failed to trigger their option to buy clause – much to Arsenal’s and the Uruguay international’s frustration.

The Gunners are desperate to offload the former Sampdoria ace with the midfielder having just one year left on his contract at the Emirates.

And Torreira has declared that he has no future in North London after being told he is surplus to requirements. 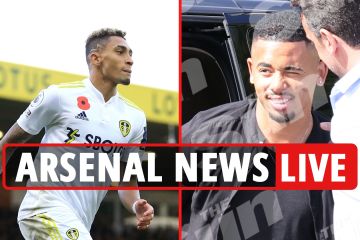 Speaking to El Telegrafo, the 2021 LaLiga winner was asked what the chances are of him remaining at Arsenal.

To which he said: “There is no chance. From the beginning they told me that I didn’t have a place.

“So I don’t want to stay either because I suffered a lot, it cost me a lot to adapt and my idea is to go to Italy or Spain.

“What I wanted was to stay at Fiorentina, but it didn’t happen for various reasons, so we’ll look for a new direction.”

Torreira also commented on a potential move to boyhood club Boca Juniors after he was denied a switch to the Argentine outfit last year.

He remarked: “Boca is very difficult. It was difficult after what happened to my mother and I really wanted to go there.

“Then I had a very good season and I have one year left on my contract with Arsenal.

“Any team that wants me has to buy me, which would be around €15m [£13m], so that’s why I see it as difficult, although I never lose hope.

“I feel a lot of love for that club and at some point I would like to play there.”