Designed for a grill, this food range will get you barbecuing up a storm in no time (Picture: Getty/Lidl)

With the Eurovision Song Contest, the FA Cup Final, and the Queen’s Platinum Jubilee coming up, it’s set to be a summer of celebrations.

The weather also seems to finally be looking up, which means al fresco dining will be on the cards for many.

Lidl’s new BBQ range is perfect for entertaining, and it’s hit shelves right in time for the festivities.

As part of the new line, shoppers can get their hands on Deluxe Ultimate British Burgers for just £2.69, along with Birchwood British Beef Burgers which are £3.29 for eight.

For something a little different, go for the Harissa Lamb kebabs at £2.99 per pack, or Lidl’s Deluxe Apple Sausages for just £1.99. 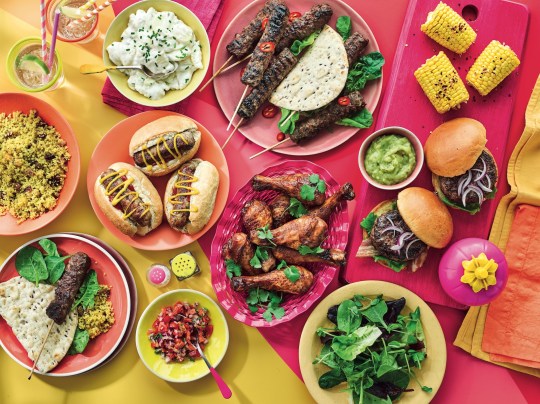 Given the weekend that’s in it, Lidl has urged customers to do their shopping early to beat the crowds and avoid disappointment.

While you’re there, why not check out the middle aisle at the German supermarket?

This week, there’s a focus on the great outdoors, so there’s everything you need for camping, gardening, or just good old-fashioned sunbathing.

We predict that the £49.99 electric cool box from Lidl will be a bestseller with staycationers, so nab one now if you like a chilled picnic.

With cold drinks on the go and your favourite foods on the barbecue, summer is officially sorted.