LAUREN Goodger braved the cold weather today as she posed in a bikini for her new tan range advert.

Wearing nothing but a tiny orange and pink thong two-piece in chilly Kent, the reality star showed off her ample assets despite the winter temperatures. 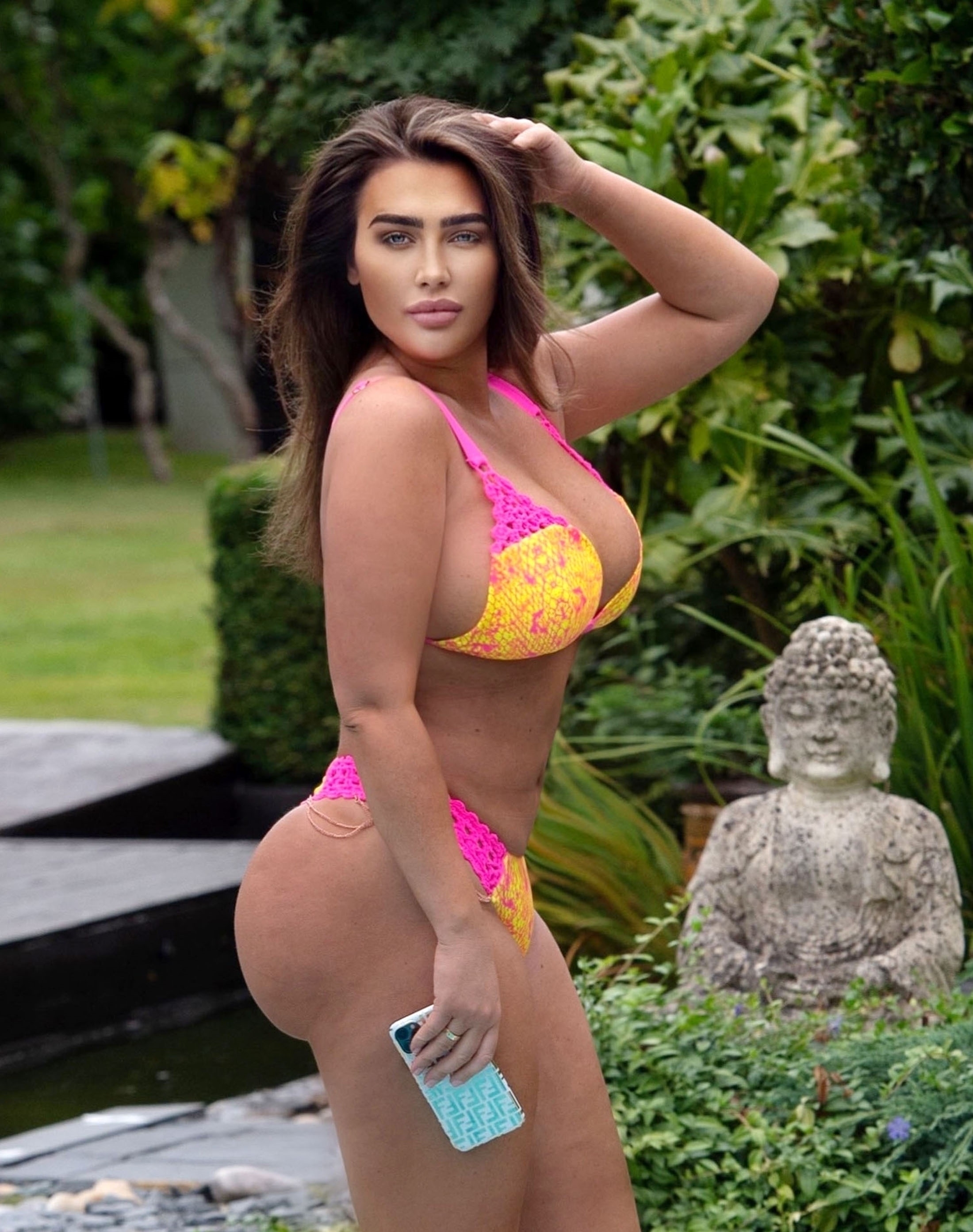 Lauren smouldered for the camera as she posed in a bikini to promote her tanning rangeCredit: BackGrid

Lauren, 34, proved she’s a hard grafter today as she stripped off to a tiny thong bikini in order to shoot promotional photos for her new self-tanning range.

Despite the chill in the air, the TV personality put her best bum and boobs forward to showcase her incredible curves and golden brown hue.

Pouring her eye-popping figure into a neon pink and yellow two-piece she posed poolside in Kent to promote her latest business venture.

Happily flaunting her peachy bum, Lauren didn’t appear to be too cold as she strutted next to the pool for the sizzling snaps. 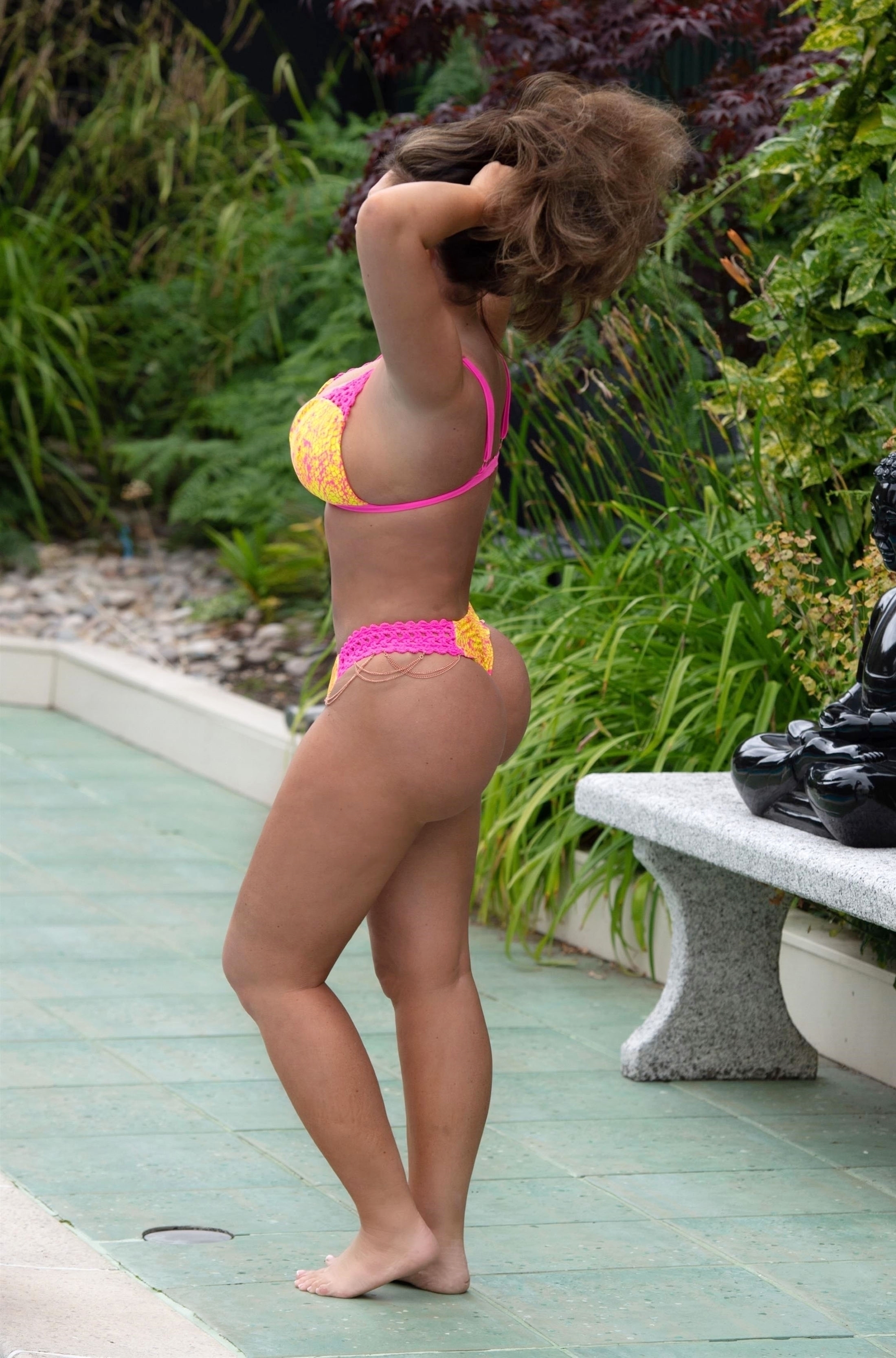 Costa del Sol or Costa del Essex, the beauty entrepreneur looked happy and confident as she worked the camera showing off a deep tan.

Essex native Lauren made sure all eyes were on her deep tan and tiny bikini by wearing a face of expertly applied make-up and styling her long hair down in soft waves.

Walking around the gorgeous location, Lauren proudly paraded her ample bottom for a number of sizzling snaps.

Lauren’s ever-expanding bum has long been a source of fascination for showbiz watchers for years. 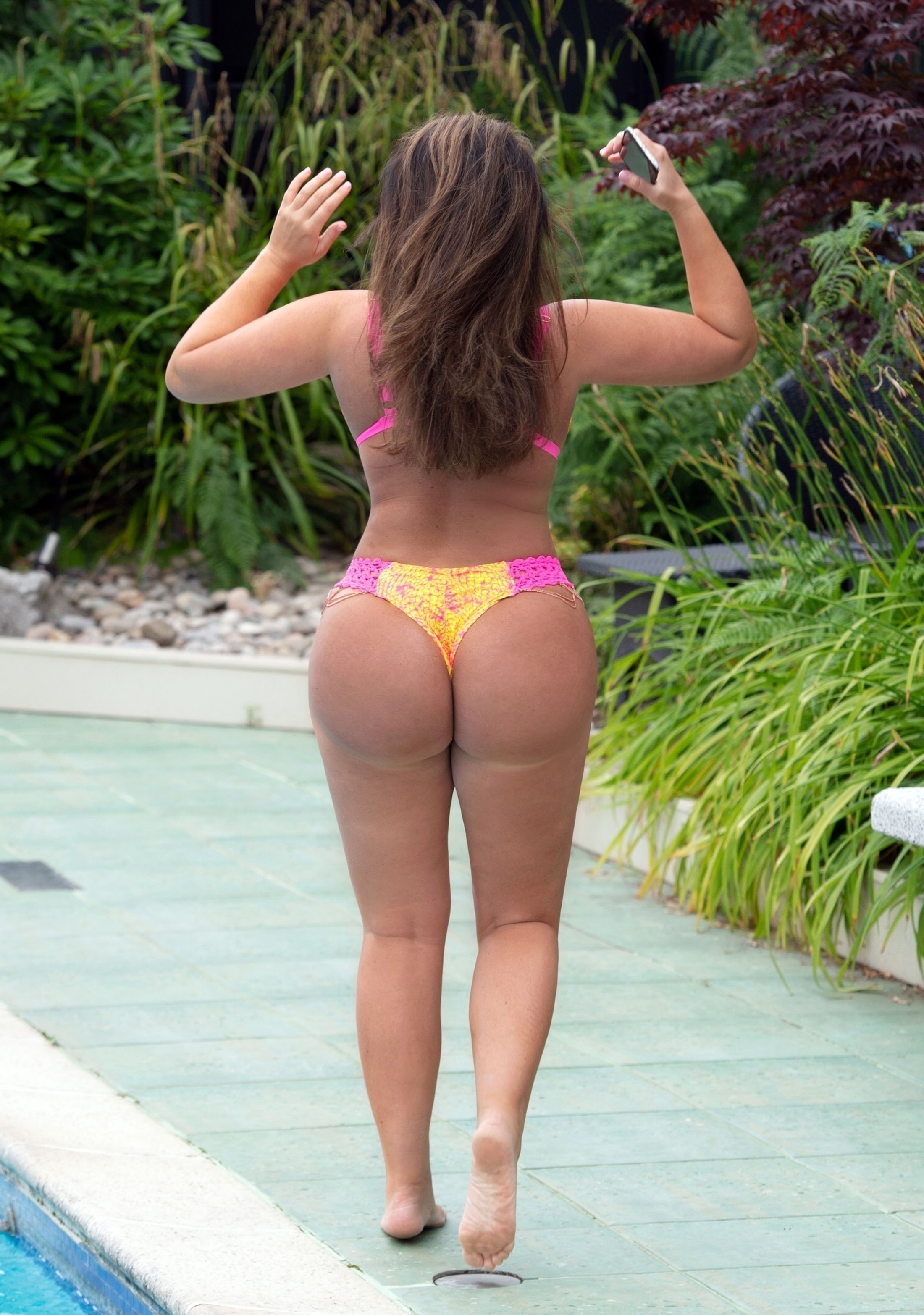 Lauren’s showed off her peachy bum as she strutted around the poolCredit: BackGrid 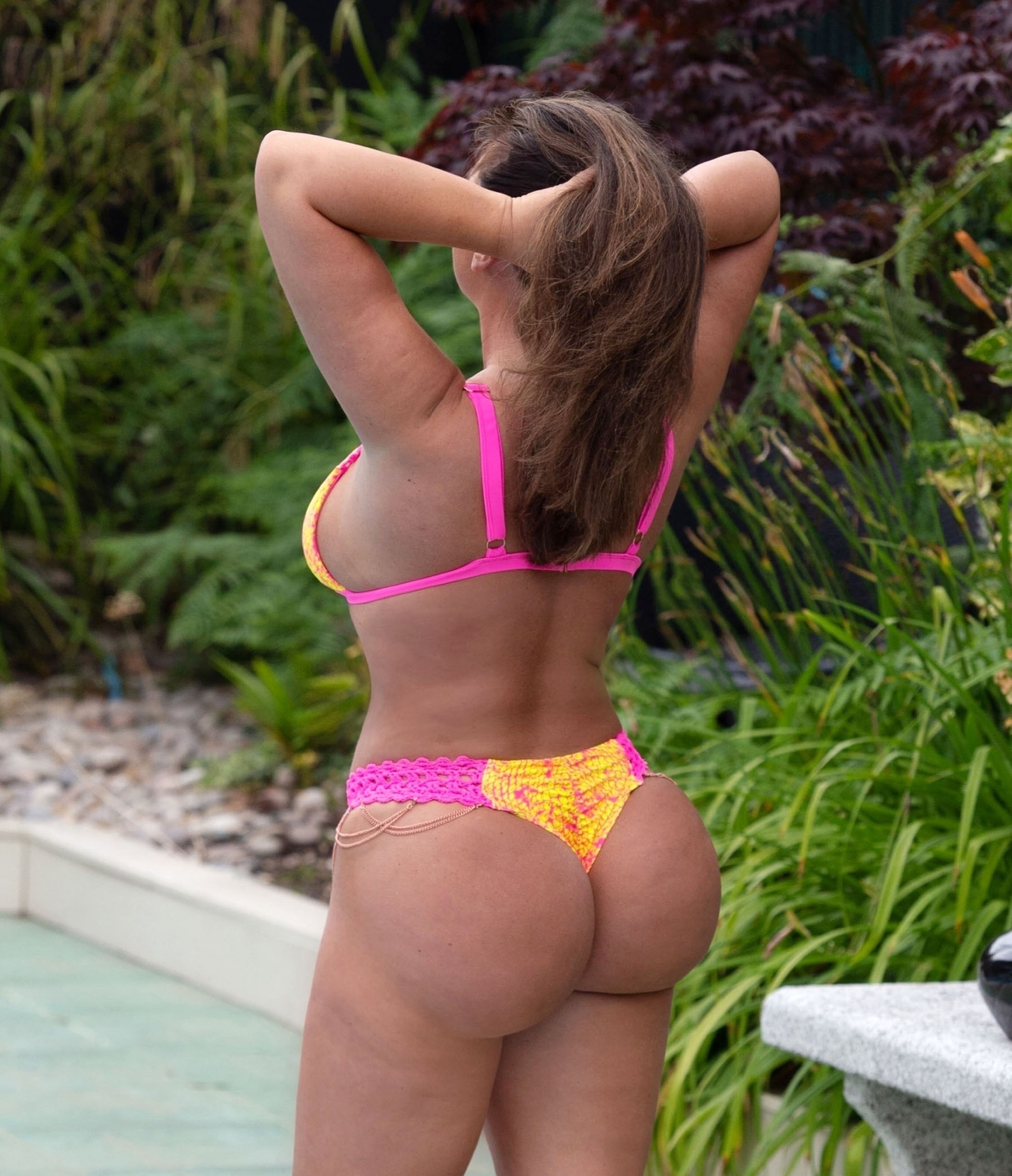 The reality star wore her hair down for the shootCredit: BackGrid

The former Towie star isn’t shy about showing off her gravity-defying rear and has even been accused of having surgery to plump it up.

Despite having to deny having bottom-boosting surgery numerous times, Lauren has always defended her colossal rear, insisting it comes from doing squats – not getting implants.

And she is even willing to have her buttocks X-rayed by scientists so the world can know the truth.

Speaking on This Morning last year, she told Holly Willoughby: “I have not had any implants in my bum. I have a normal body shape – but in the media they make me look different.” 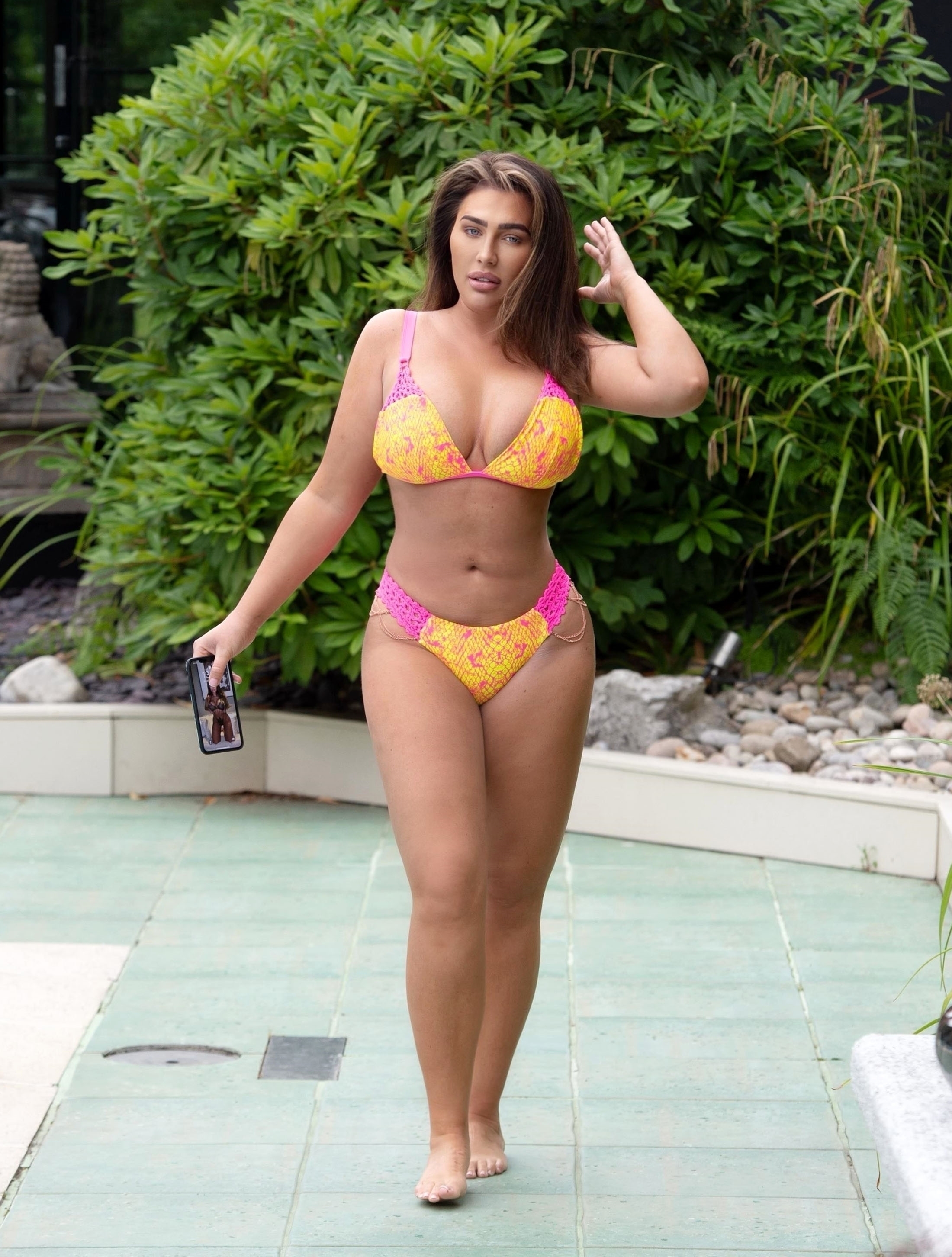 Lauren looked stunning as she showed off her toned figure and washboard absCredit: BackGrid 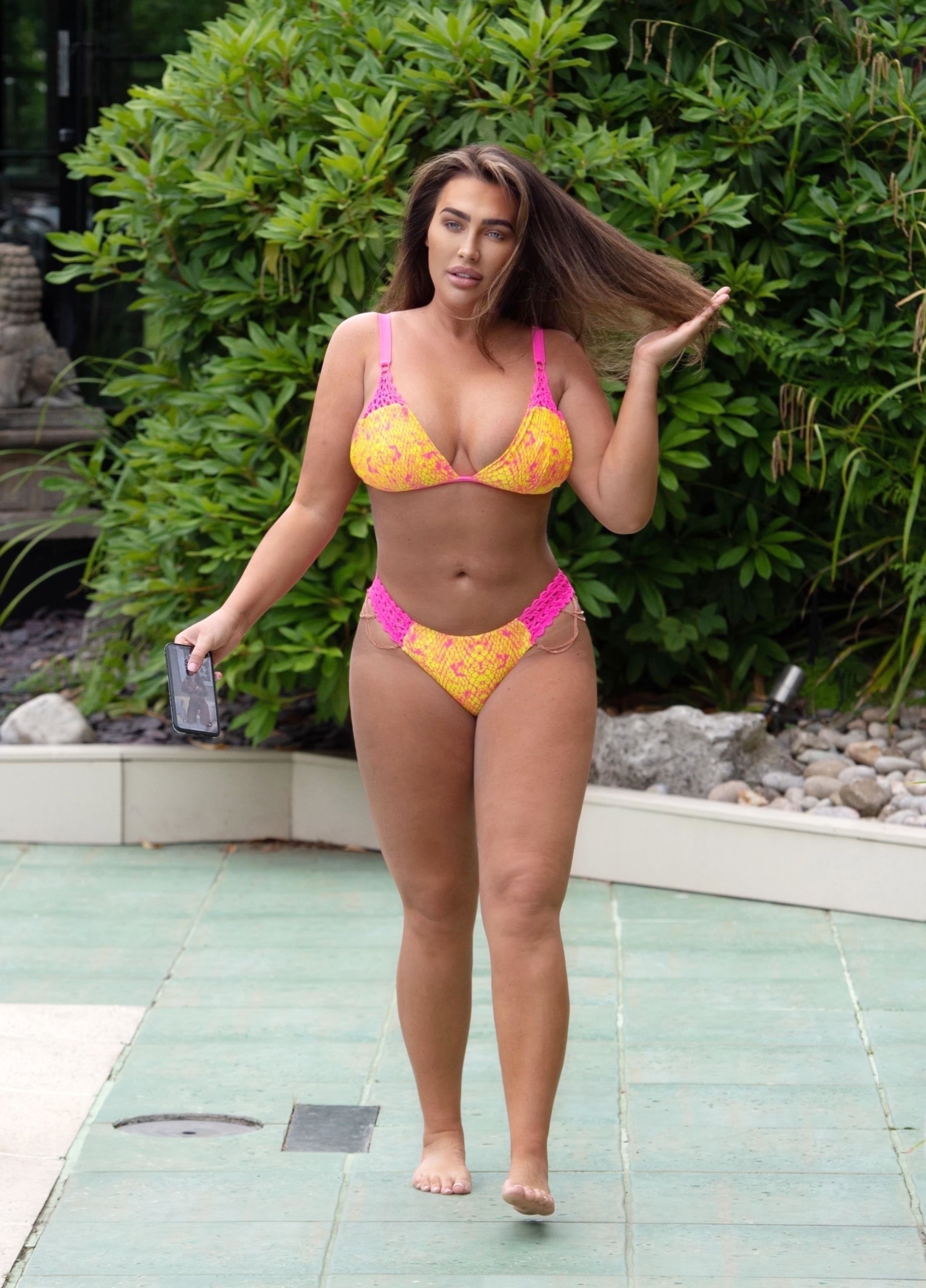 Lauren didn’t mind getting her kit off even though it was chillyCredit: BackGrid

She added to New magazine: “I’ve always been thick set and I’ve always had a big bum. That’s the way it is.

“I’ve just got a big a**e! Feel free to do any X-rays or scans or whatever you need to do to prove it. Fat transfers don’t last.

“You need to keep getting them redone and I’d be forever under the knife if that were the case!”

However, she admitted: “I had lipo and sculpting three years ago and that was it. My bum goes up and down with my weight.” 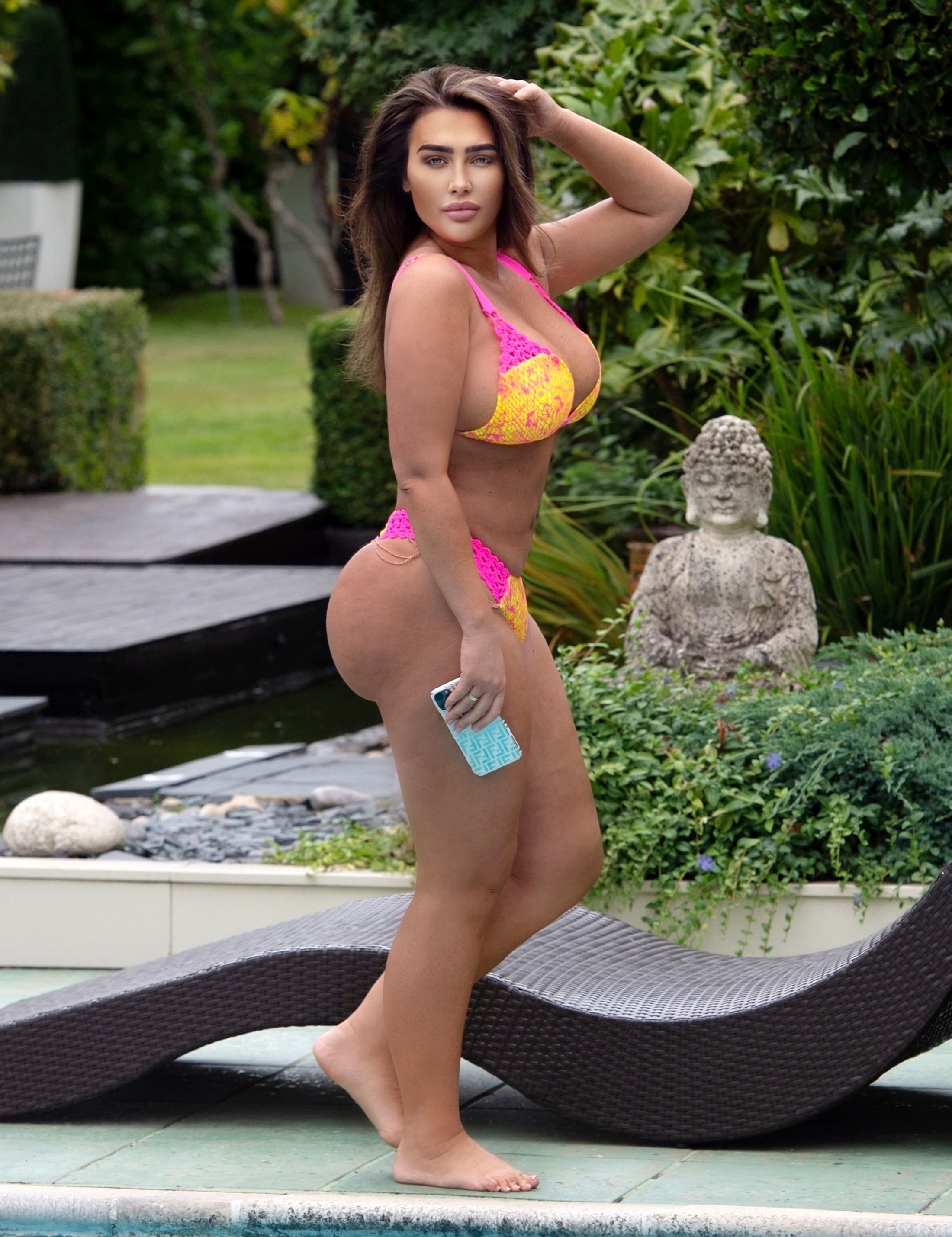 Lauren poured her curves into the tiny bikiniCredit: BackGrid

In 2015, fans were adamant Lauren had undergone a fat transfer – where a surgeon moves fat from the rest of your body and injects it into your bottom.

But Lauren insisted her rounded bum was all down to working out and religiously doing squats every day.

She said: “I do squats but that only counts for about 20 per cent of what you see. The other 80 per cent is weight training. Jumping is also a brilliant exercise to do as well.”

Speaking to The Sun Online, she continued: “I don’t really care what people say about me these days. But I have to say I found [bum lift surgery rumours] entertaining.

“I thought it was quite a compliment for everyone to think that I must have had something done. I didn’t mind that attention at all.”

Lauren flew to Turkey in 2018 to undergo laser liposuction to get rid of hard pockets of fat on her body.

After landing back, she headed off on a juicing retreat where she lost almost two stone in weight – meaning her bottom now looks even bigger than before.

While not everyone is a fan of her beloved “bubble butt”, Lauren said she’s never felt more confident and admitted she would continue working hard to get her backside even bigger.