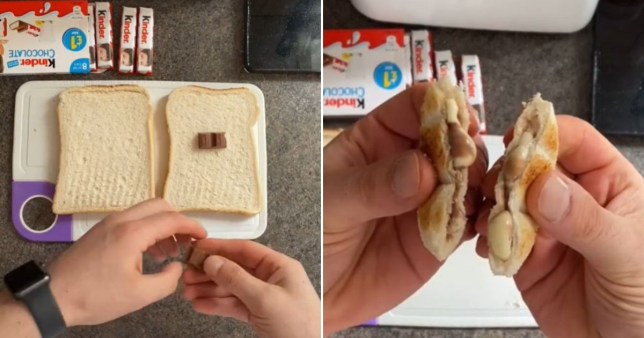 It’s time to forget about the humble cheese toastie.

We had a great run with the sandwich classic and it has got us through many a lunch and hangover – but change is good.

Where did this recipe originate from, you ask? TikTok, of course.

The video-sharing app has become well-known for its food concoctions from the famous feta pasta to whipped coffee.

Now it’s all about the Kinder toasted sandwich.

TikTok user @adrianghervan has shared a variety of food and sweet hacks but it’s his chocolate creation that is generating a buzz.

In a video that has now been viewed over two million times, the creator shows viewers how to make what is also known as a ‘Kinder pancake.’

First, he takes two slices of white bread and a small Kinder bar.

He places the chocolate pieces into the centre of the bread and puts one slice on top of the other.

Then Adrian uses the rim of a wine glass to cut a circle out of the bread and create the pancake shape.

Next, he places the circle sandwich into the toaster for two minutes.

And voila, you have a toastie filled with gooey chocolate goodness.

Those in the comments praised Adrian for his genius hack.

‘That’s phenomenal. I have to do this,’ said one user.

‘Omg I just tried this, it’s delicious,’ wrote another.

Meanwhile, in a video posted just yesterday, Adrian showed his followers how to make an Oreo chocolate toastie, using the same method as before.

This means his toastie hack can be used with just about any of your favourite chocolate treats, from a Reese’s Peanut Butter Cup to a Galaxy Caramel bar.

What do you think of the Kinder chocolate toastie?

Let us know in the comments or send an email to metrolifestyleteam@metro.co.uk