Sharing their best tips — in and out of the kitchen! Celebrity chef Judy Joo sat down with culinary icon José Andrés to chat about his food, success and podcast.

With multiple James Beard Awards and more than a dozen restaurants (including his two-Michelin-starred eatery in Washington, D.C., Minibar), José Andrés has earned his title as one of the most successful chefs in the world. “I’ve been a cook all my life, but some days I feel I’m still learning to be a great chef,” admits Andrés. “I’m always improving beyond my own knowledge because there’s always something new to learn and new horizons to discover.”

The Spain native, who is also a restaurateur, humanitarian and cofounder of the ThinkFoodGroup, talked to chef Judy Joo about his impressive career exclusively for Us Weekly. Read their chat below and scroll down for a delicious recipe.

Judy Joo: Did you always want to be a chef?

José Andrés: When I was little, my father would make big paellas. He’d put me in charge of helping tend the fire. He told me, “Learn to control the fire, and you’ll be able to cook anything.” That was the beginning for me, the spark that led to my love for cooking.

JJ: How does your background influence your style in the kitchen?

JA: For me, it starts with the foods and flavors I grew up with in Spain. It’s my goal to one day get all the people in America making a paella in their backyard or cooking garlic shrimp, Spanish style.

JJ: Tell Us about your podcast, “Longer Tables.”

JA: I get to sit down with friends like Ron Howard, Yo-Yo Ma and Liev Schreiber and hear their amazing stories. Ron told me how food saved his first movie! The crew was working hard and spirits were down. His wife decided to cook for everyone, and that meal helped bring the team together.

JJ: You’ve got restaurants on both coasts. How does the food scene differ?

JA: I’m always in awe of the farmers’ markets and produce in L.A. That plays such a big part in what you can create. In NYC, it’s more to me about walking just a couple of blocks, and boom — there are so many places to discover.

Anyone wandering through the NoMad neighborhood Manhattan might find themselves at Andrés’ Zaytinya restaurant. They serve a delicious dish called htipiti — but even those who can’t get a reservation at the hotspot can try the dish at home. The chef shared his recipe with Us Weekly readers. 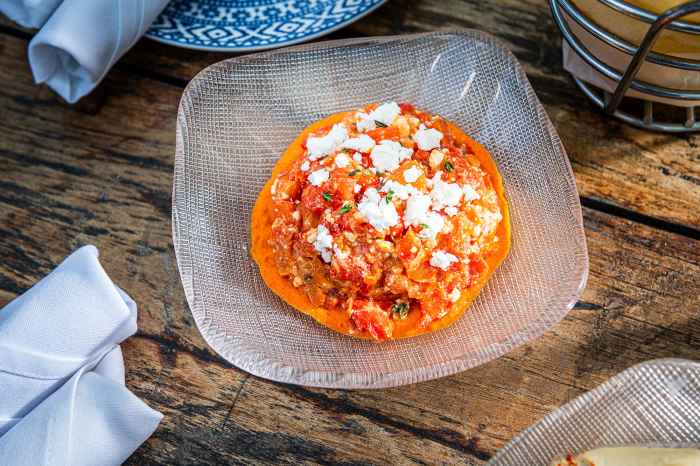 “This recipe is an interpretation of the traditional htipiti (pepper spread) recipes of the Mediterranean. It uses sweet red bell peppers instead of spicy peppers, and while htipiti is traditionally beaten in a mortar and pestle until smooth, we keep ours rustic,” Andrés explained to Us.

See the recipe (which serves two) below:

1. Preheat oven to 300 degrees. Toss red peppers in canola oil, then place peppers directly on oven racks. Bake for approximately one hour, turning every seven minutes or so. Remove from the oven carefully with tongs. Set the peppers aside and let the peppers cool. Mince garlic and shallots and place in a small mixing bowl. Combine oil, vinegar, garlic, shallots, white pepper and salt. Set aside.

2. Peel the skins from the outside of the peppers. Discard the skin, stems and seeds.

Follow chef Joo on Instagram and hear Andrés’ “Longer Tables” podcast via his Substack or anywhere you listen to podcasts.