Beijing-based IS Architecture and Design has created a hair salon and cosmetic spa in Beijing with avocado-green interiors informed by space-age design.

Ego Hair Salon is located in Beijing and was designed to have a futuristic feel while also embracing the surrounding nature.

IS Architecture and Design redesigned the interior of the building, a former gym, by adding curved walls and large arches to its circular plan. 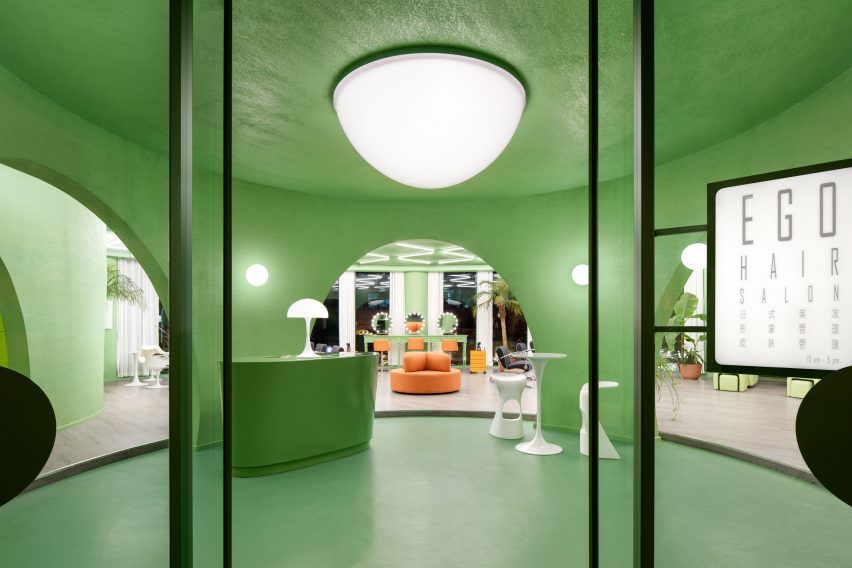 Top: Ego Salon by IS architecture and design. Above: the main entrance has a “space age” theme

The studio looked to 1960s space-age design and how it was informed by technological inventions when creating the salon, which aims to combine technological elements with a more natural feeling.

“We were looking to create a space that was relaxing and cosy but at the same time vitalising and somehow surprising,” IS architecture and design founder Fabrizio Gurrado told Dezeen.

“The original space was used as a gym before, an open space with a circular plan and a whole 270-degrees glass facade, immersed in the foliage of the trees outside.” 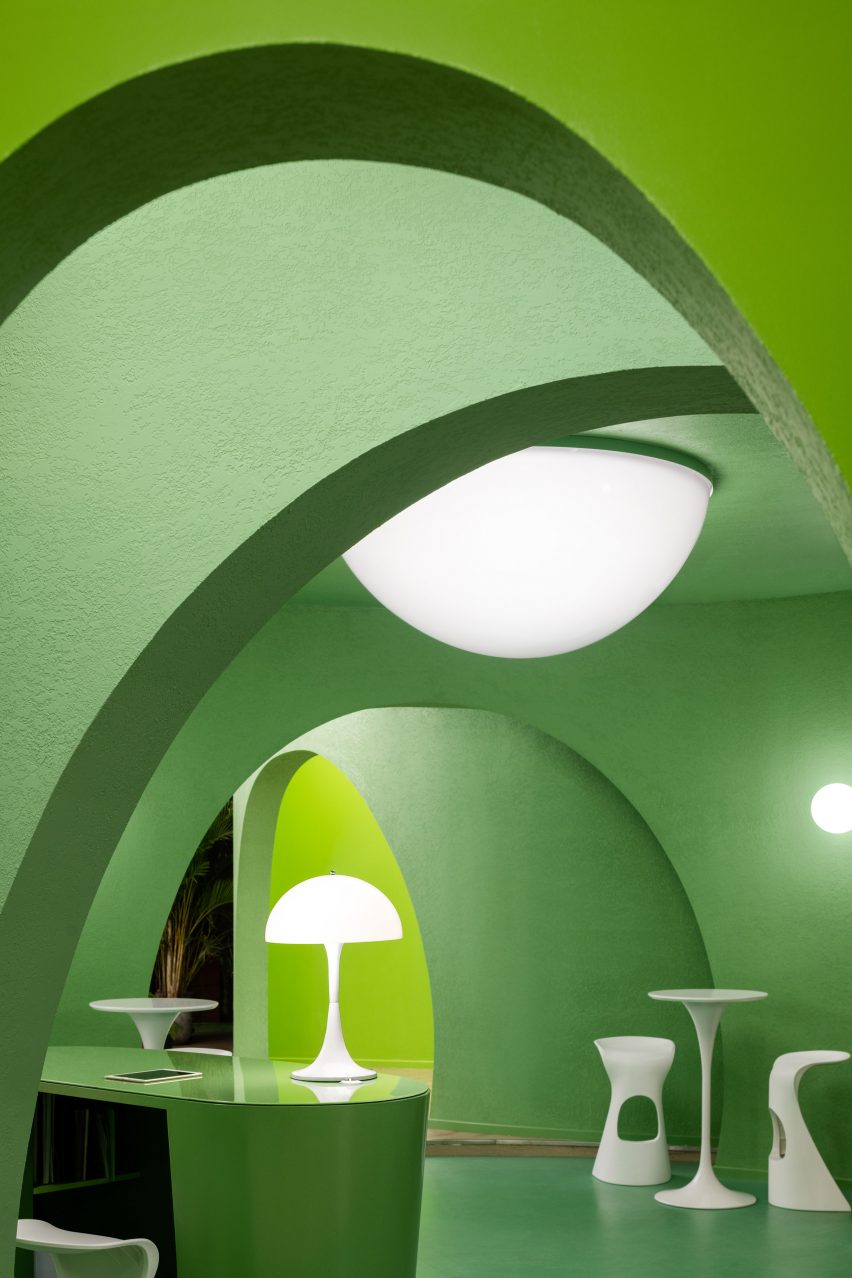 Walls are textured with a coarse-grain plaster

The studio looked to the foliage of the surrounding trees when it was deciding on a colour scheme, opting for a bright avocado green which it used to cover both walls and other surfaces in the salon.

A coarse-grain plaster was used throughout the design to add softness to the “space-shuttle hub” interior. 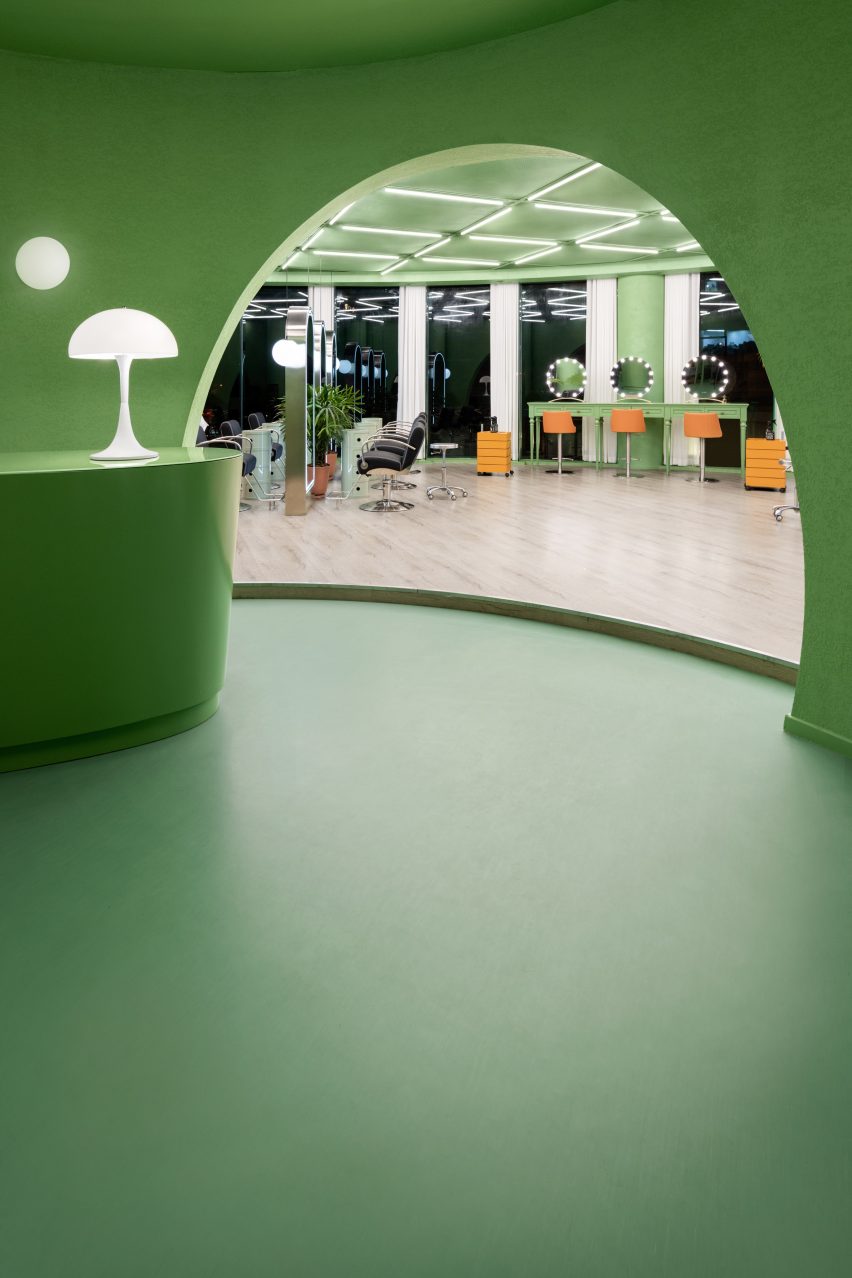 Arches lead to the main salon

The studio filled the design with space-age style furniture, including a curved reception desk finished in the same avocado green as the walls and a large oversized domed ceiling light that Gurrado described as an “artificial acrylic sun”. 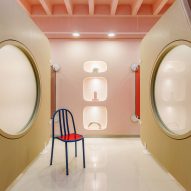 Three arches lead from the lobby to the salon. Instead of being perfectly circular, these have a natural curvature that gives the space a cave-like feeling.

“The arches also instead of being perfectly circular like they would be in a plane have a natural curvature more similar to what you would find in the natural caves,” Gurrado said. 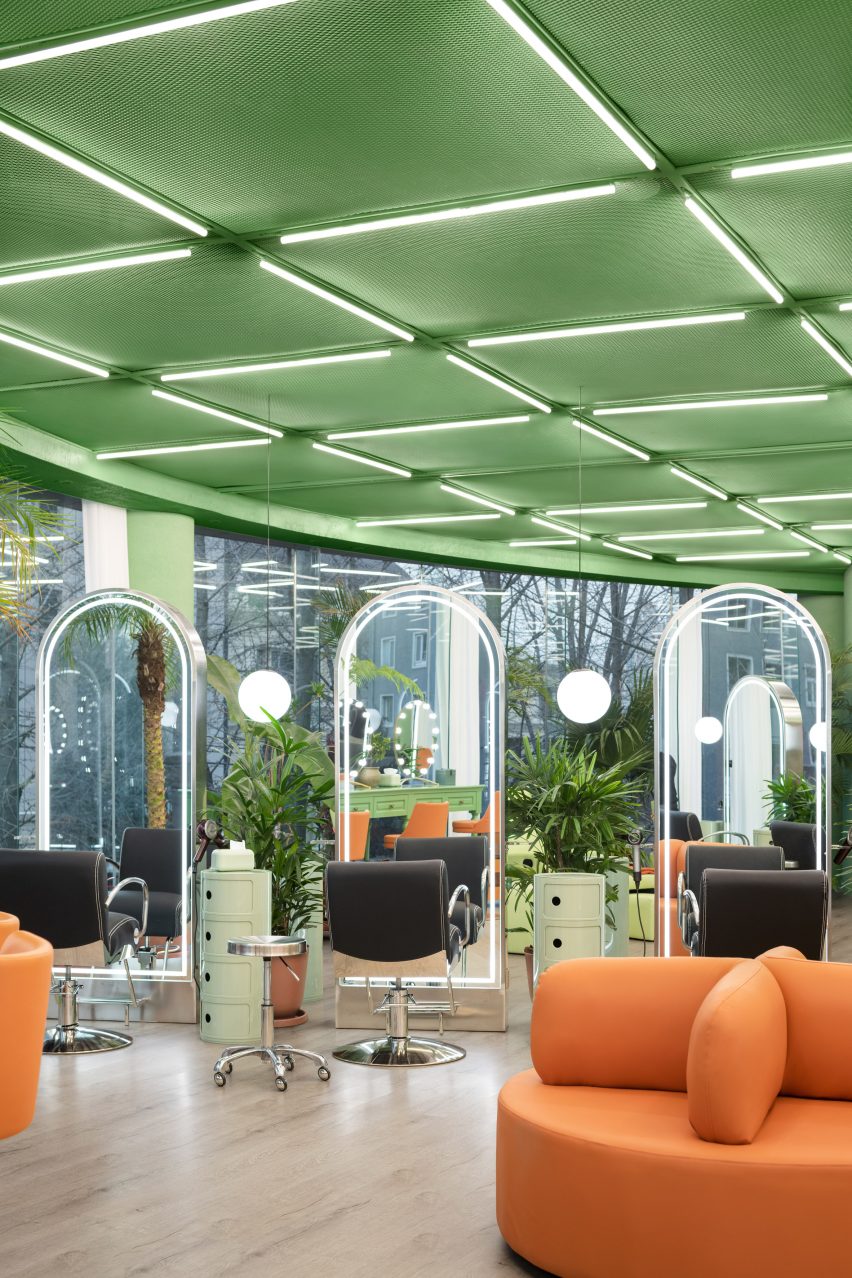 Pale wood covers the floor of the salon and provides a neutral contrast against the bright green. 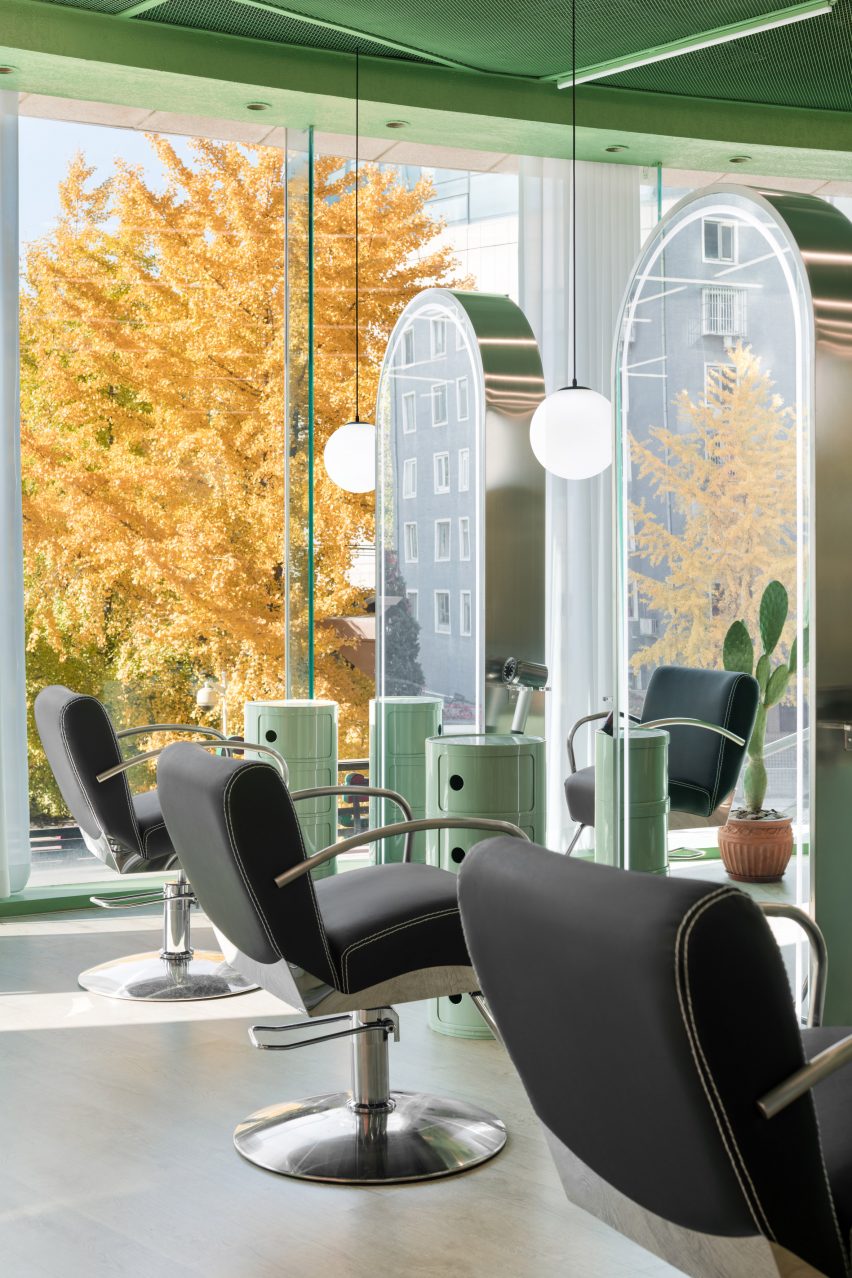 It has views out to the treeline

Private treatment rooms employ an ochre colour palette to differentiate them from the general salon space.

The studio used contrasting colours to mark the different rooms.

“Sprout greens and Tangerine orange worked the best for this purpose, while for the VIP room we have chosen a more relaxing Twine ochre colour,” Gurrado explained. 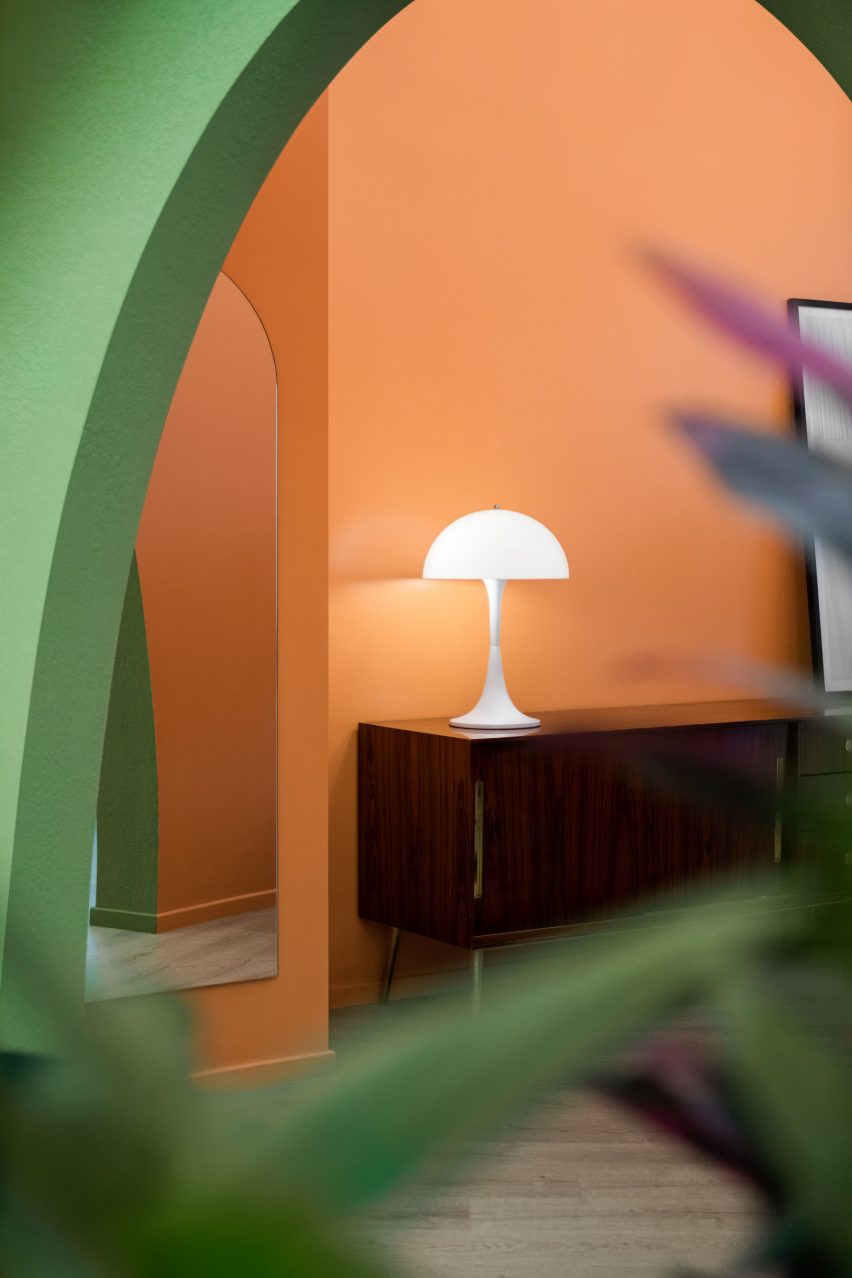 Large planters, cacti, palm trees and tropical plants were placed around the salon to further support the nature theme.

“In this project of ours, we have opted to propose a world of the future in which artifice and nature coexist in a serene and clean balance,” Gurrado concluded.

IS Architecture and Design was founded by Fabrizio Gurrado in 2013 and is based out of Beijing, China. The studio creates works spanning, commercial spaces, offices, residential and retail.

Other space-age informed designs include a tonal office in Oslo and this day spa by Atelier Caracas modeled on 2001: A Space Odyssey.

Photography is by Shawn Koh.