THREE lash technicians are exposing the most annoying things that clients do on a daily basis, and it would seem the customer is not always right.

Shelly Walia, Stacey Cooper and another lash tech have all dealt with annoying clients working in their industry.

Stacey is telling it how it isCredit: TikTok 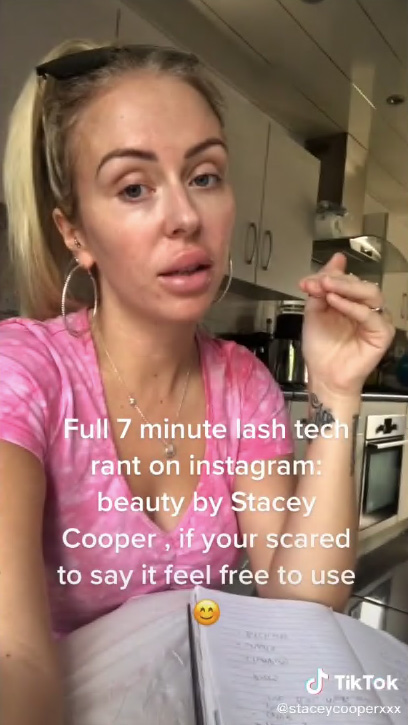 Shelly, who owns Iced Lashes in Ontario, Canada, took to her TikTok account to explain how annoying it is when clients ask for very voluminous lashes and then think they are too much when finished.

Posting under the domain @icedlashes Shelly said: “When you finish a mega volume set, and the client says ‘these are way too full for me’.”

Adding: “Ever have these clients? But you requested this babe.”

Shelly’s post has been viewed over 45k times, and many TikTok users have been quick to comment with similar experiences.

“Or when you do a mega and it’s ‘not full enough’ like sis, you have no more lashes” commented one person.

“The worst” added another.

Similarly to Shelly, Stacey Cooper posted on the platform, revealing what she and other lash techs frequently discuss.

“Right, I’m doing a video about what I and other lash techs talk about all the time. So I’m gonna start with lasting lashes. A couple of weeks ago, I put some classics on myself with some glue that I would never use on my clients” said Stacey.

Adding: “The glue is not good, they don’t last. But it did, they lasted two weeks because I left them alone, didn’t pick them. My point is, the glue I used on myself is meant to last seven to 10 days, it’s not a full semi-permanent glue.”

Stacey said that she can’t understand how clients say their lashes are falling out when she uses much stronger glue on them.

“The one I use (on clients) is about 4-6 weeks, that’s what you’re meant to get. So if my crap glue lasts two weeks, and yours isn’t lasting a week or two, that’s not something I’m doing, that’s something you’re doing” said Stacey.

Adding: “All last techs will offer you the same, we’re doing our job. Yous have obviously left and done something wrong. The glue lasts and I know it does as I’ve had to put a status out saying I charge for a full set after six weeks because sometimes they stay on longer.”

All last techs will offer you the same, we’re doing our job. Yous have obviously left and done something wrong.”

Stacey said that another thing that irks her is when clients give out about their natural eyelashes growing out.

“I keep getting, ‘oh my lashes they’ve got roots on them, it’s only been two weeks, how have they got roots?’ You tell me. If you got your hair done off the hairdresser, they do your roots” said Stacey.

Adding: “Three weeks later you’ve got roots. Do you ring the hairdresser and go ‘oh my God how is that happening?’, hair grows, eyelashes are hair, you’re gonna get roots that’s what happens, they grow, they fall out.”

A third lash tech, who posts under the TikTok domain @hobtrainingacademy explained how she discovered how a client’s lashes fell off the next day after her work was blamed.

“When your client texts you saying all her lashes have fallen out after just one day. To find her on Instagram drinking, raving it up at a foam party, crying over her ex getting with someone in the corner” said the lash tech.

“Walking home barefoot in the rain, all with captions saying ‘living my best life.” added the woman. 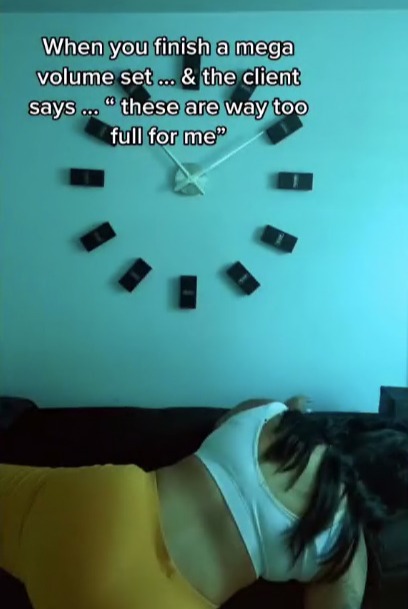 Shelly says clients don’t like what they asked forCredit: TikTok 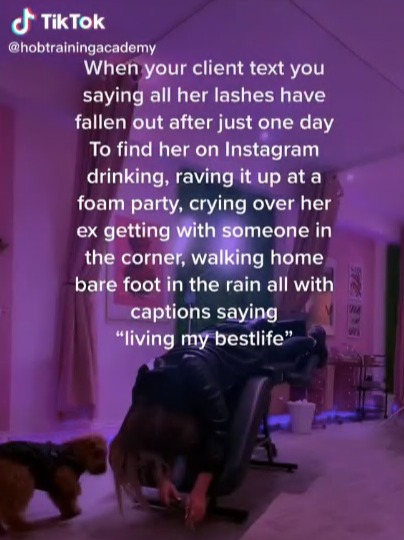 Another lash tech found out why her clients lashes fell offCredit: TikTok

In related news… I’m a waitress and these are the annoying complaints customers make every day AFTER they’ve eaten their food.

And…I work in a supermarket and all customers say the same stupid thing at the checkout – along with other annoying things. 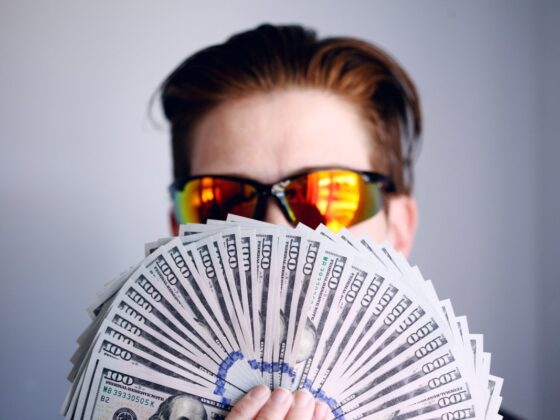