LET’S be honest – you could be in the happiest relationship in the world and broaching the subject of money is always going to be awkward.

Well in an attempt to avoid having the tense personal finance conversation, plenty of couples who live together simply decide to split their bills down the middle.

Victoria urged couples to pay bills based on their percentage incomeCredit: instagram/victoria_devine

Sounds fair, right? Well according to finance expert Victoria Devine, this could be doing one of you a serious disservice.

Earlier this month, the author of She’s On The Money shared an Instagram Reel urging couples to rethink this arrangement.

She said: “’I’m about to start a lot of awkward conversations in peoples relationships but… I DO NOT BELIEVE IN PAYING EQUAL RENT!!!

“Why? Because while it might be EQUAL it’s not EQUITABLE.”

Although it might seem like the fairest way to do things at face value, Victoria stressed how this approach puts “more pressure” on the person earning less.

According to the Office of National Statistics, the male workforce earn eight per cent more than their female counterparts.

So rather than splitting everything down the middle, Victoria recommended dividing bills by your specific income.

She added: “So let’s normalise splitting expenses based on a percentage of income rather than 50/50..”

In order to do this, Victoria says you need to work out your annual income after tax and then divide it by 12.

Then calculate your joint income by adding them both together.

Once you’ve got this figure, Victoria added: “Now divide each individual’s income by this joint income figure and multiply by 100 to get a percentage.”

“Percentage based is wayyyyy better,” one fan replied. “Don’t get me started on domestic labour and ‘traditional’ household roles!”

Another added: “Me and my partner split our income 60/40 to work out as equal for our combined incomes!

“I’ve never seen anyone else who does this and I came up with the idea, so refreshing to see we aren’t the only ones.”

Meanwhile, a third wrote: “110 per cent agreed – that’s what we have been doing, and it’s such a relief!” 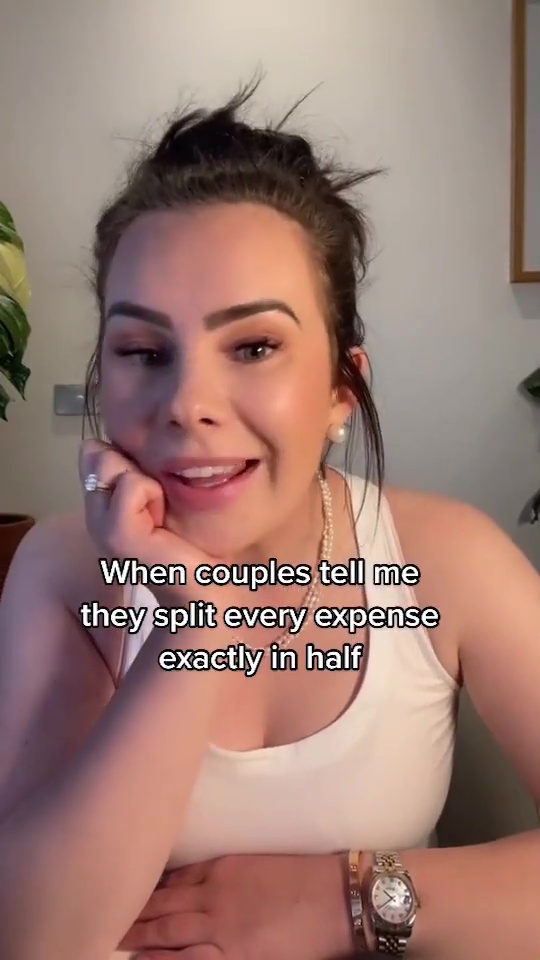 Victoria says you shouldn’t be splitting bills equally if you don’t earn the sameCredit: instagram/victoria_devine

For more relationship stories, this furious bride flogged her wedding dress for just £100 after she discovers groom ‘cheating with her son’s godmother’.

And this dating coach revealed why feeling butterflies can actually be a HUGE red flag in your relationship.

Plus this woman sends herself drinks from fake secret admirer on first dates – trolls say it’s embarrassing but she has to remind them of her worth.

I married my husband after dating him for two WEEKS, people say I’m crazy