A WOMAN has shared the shocking way her boyfriend cheated on her with a bartender whilst the two were out grabbing drinks at the beach.

Allison Cabrera a model based in New York shared the horrifying story on her TikTok account, where it has gone viral with over one million views.

Allison Cabrera, 22, a model based in New York revealed the shocking story on TikTokCredit: Tiktok/@notallisoncabrera

We’ve all heard horrifying stories of people cheating on their partners and getting caught in the worst ways, but Allison’s story left users completely shocked.

Allison captioned the video saying; “I wish I was joking.”

She revealed that she and one of her ex-boyfriends had gone to the beach for a date, a spot they frequented together regularly.

Whilst there, they became friendly with one of the bartenders who would often serve them.

Allison recalls that on one evening her ex-boyfriend had gone to the bar and ended up getting up to no good with the said bartender.

One user said: “I thought you were one of the three at first.” To which Allison replied; “Nope.”

The bartender who clearly felt a bit bad about sleeping with someone she knew had a girlfriend attempted to apologise to Allison in the most confusing way.

When Allison went back to the bar the bartender gave her plenty of free ‘sex on the beach’ cocktails to soften the blow.

Many users said to Allison she had a lucky escape from him.

One user wrote: “Life took out the trash for you and now you get free drinks. Sounds like a win in the end.”

Another user added: “The audacity these men have.”

A third person commented: “I’d trade most of my exes for a free cocktail.” 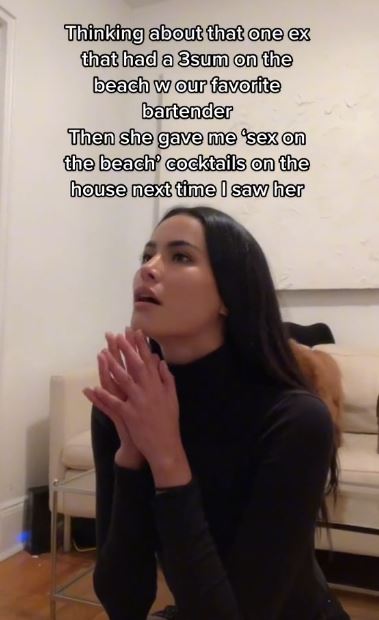 Allison said she wishes she was joking about the storyCredit: Tiktok/@notallisoncabrera

I knew my fiance was cheating on me when he changed this one thing, I should have dumped him sooner.

Plus, I left my husband after finding a note from his secret lover in his car, I was mortified when I realised the truth.

Meanwhile, a relationship coach reveals the three reasons you and your partner are really arguing.

I’m the queen of dating fails – one guy actually told me I’d put him off relationships for life, but he wasn’t the worst