YOUR wedding day is supposed to be the one day you will never forget.

And this bride will definitely never forget hers – but for all the wrong reasons.

Your wedding day – what could possibly go wrong?Credit: tiktok @hollinator1424

The stunning TikTok user, @hollinator1424, couldn’t have been more excited – she was about to become officially married to the love of her life.

Wearing a floor-length white dress, the blonde was standing in front of the guests holding hands with her husband-to-be.

But within a few seconds, things went from bad to worse.

As they were reciting their wedding vows, she started to feel unwell and tried to signal her fiancé – but he struggled to understand what she was trying to say.

”He thought I was joking!” she said in the video, which has since gone viral, attracting more than 3.7million views.

With the pastor still delivering the wedding speech, she suddenly looked very dazed and collapsed into the groom’s hands.

The bride then took a moment to step aside – where she can be heard puking.

But, apparently, that wasn’t the end of the tragedy.

”My baby nephew then pooped on my dress right after while I was pukin,” she wrote.

In another video, she addressed everyone’s concerns and explained what had really taken place that day.

”So basically, it was just because I was super dehydrated and I hadn’t eaten anything that day.”

The weather, according to her, didn’t help either: ”It was Florida and it was so hot and humid!

But it looks like she was doomed from the start as she naturally suffers from low blood pressure and iron deficiency, which makes her prone to passing out and feeling unsteady.

Luckily, it wasn’t the real ceremony.

The viral TikTok video was taken after they had already visited the local courthouse earlier that day, which was then continued at a nearby winery for celebration dinner and drinks.

While waiting for the food to arrive, the couple walked around the yard and decided it’d be the perfect spot to do ”a little Christian ceremony”.

And the rest is history.

”Testing out that ”in sickness” part before the i dos – smart!” some wrote.

”I need a guy that would of been like stop the show get my girl some water and wait a dang minute!” someone else added.

Meanwhile, one woman faked her WEDDING to get an ex to text her – ”I even paid for a photographer to take pictures with my new ‘husband’.”

And this divorced woman shared hilarious pics of her bridesmaids which show her marriage was doomed from day one.

Plus, ”I’ve banned my man’s gran from our wedding so I can get drunk – she’s devastated & might not live to see another wedding.” 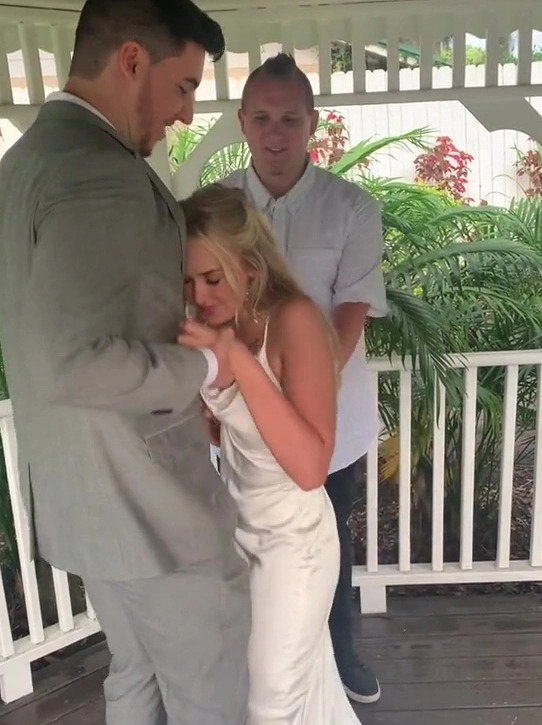