WE HAVE all had first dates that could have gone a lot better than they did.

There can be many reasons they go wrong, from not recognising them from their profile picture to just not hitting it off like you thought you would.

Lulu was left flabbergasted at her dates response to her telling him to leaveCredit: TikTok / notsimpqueen7

But one woman has revealed the very strange date she went on, which she shared on her TikTok account, notsimpqueen7, where it has been viewed over two million times.

Lulu, who lives in the US, explained how she went on a date with a guy she had meant on Hinge and invited him to her place before going out to a bar.

She explained in the video that she had kicked the man out after 15 minutes of him arriving as she was getting bad vibes from him and that he had asked to use her toilet before he left.

Lulu didn’t think anything of the request and let him use it before he headed off.

But she was dumbfounded when she found out what he had done in there.

To her surprise, her date had left a bizarre message underneath her toilet seat, written in her lipstick.

Whilst cleaning her toilet seat of the message, she said: “He writes in lipstick, on my toilet, RUN?!?”

She captioned the video: “he also wrote his phone number on the seat?? my weirdo radar was spot on.”

Although Lulu saw it as a close call, some users suggested she must have been the problem for him to have left a note like that for other men she might ring back.

One user wrote: “I’m trusting my boy on this.”

“I feel like we need a storytime cause I’m on his side so far.” Said another user.

To clear things up, Lulu posted another video explaining why she decided to kick the guy out.

Lulu said she invited him back to her house along with another friend but along the way she decided she didn’t want to spend the rest of the evening with him.

As an excuse to get rid of him, Lulu told him she was still in love with her ex-boyfriend and didn’t feel comfortable hanging out with another guy.

At this point, he asked to use the bathroom and wrote under her toilet seat ‘She is effing her ex, RUN.’

He also wrote down his phone number so that he could tell everyone the story.

Users were shocked by the anonymous man’s reaction, and many agree Lullu had every right to kick him out, one user wrote: “why are the comments acting as if she should be forced to hang out with someone she decides she doesn’t like?”

“You have every right to do this, I don’t know why people are mad at you.” Exclaimed another person.

A third person commented: “His actions say it all, any guy who does this doesn’t sound right.” 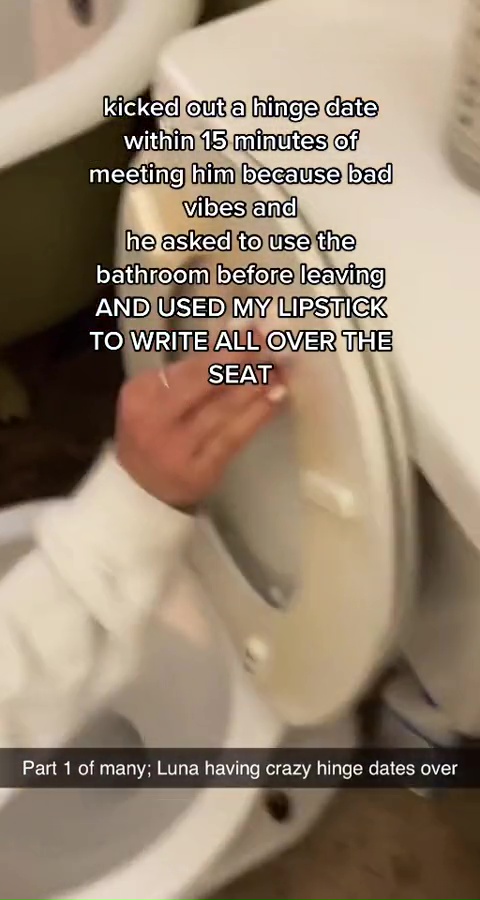 He used her lipstick to write a ‘warning’ on her toilet seat for other menCredit: TikTok / notsimpqueen7

Plus, a woman divides opinion by making her boyfriend Facetime her for his full 12 hour shift as she doesn’t trust women.

Meanwhile, we have men drooling until they see we are catfishes, then they flee.

A woman has revealed how she received a £15 set of spoons from her husband after he spent thousands on other people’s gifts.

I’m a bridesmaid for hire and this is the hardest part of my job… And no, it’s not wearing the ugly dresses