A NEW mum has told how her husband calls her “Miss Piggy” to “motivate” her to lose weight – and even makes their young kids say it too.

The 32-year-old woman, believed to be from the US, said she’s struggling to lose stubborn baby weight because of her “postpartum depression” and that her husband is trying to help “because he loves her”. 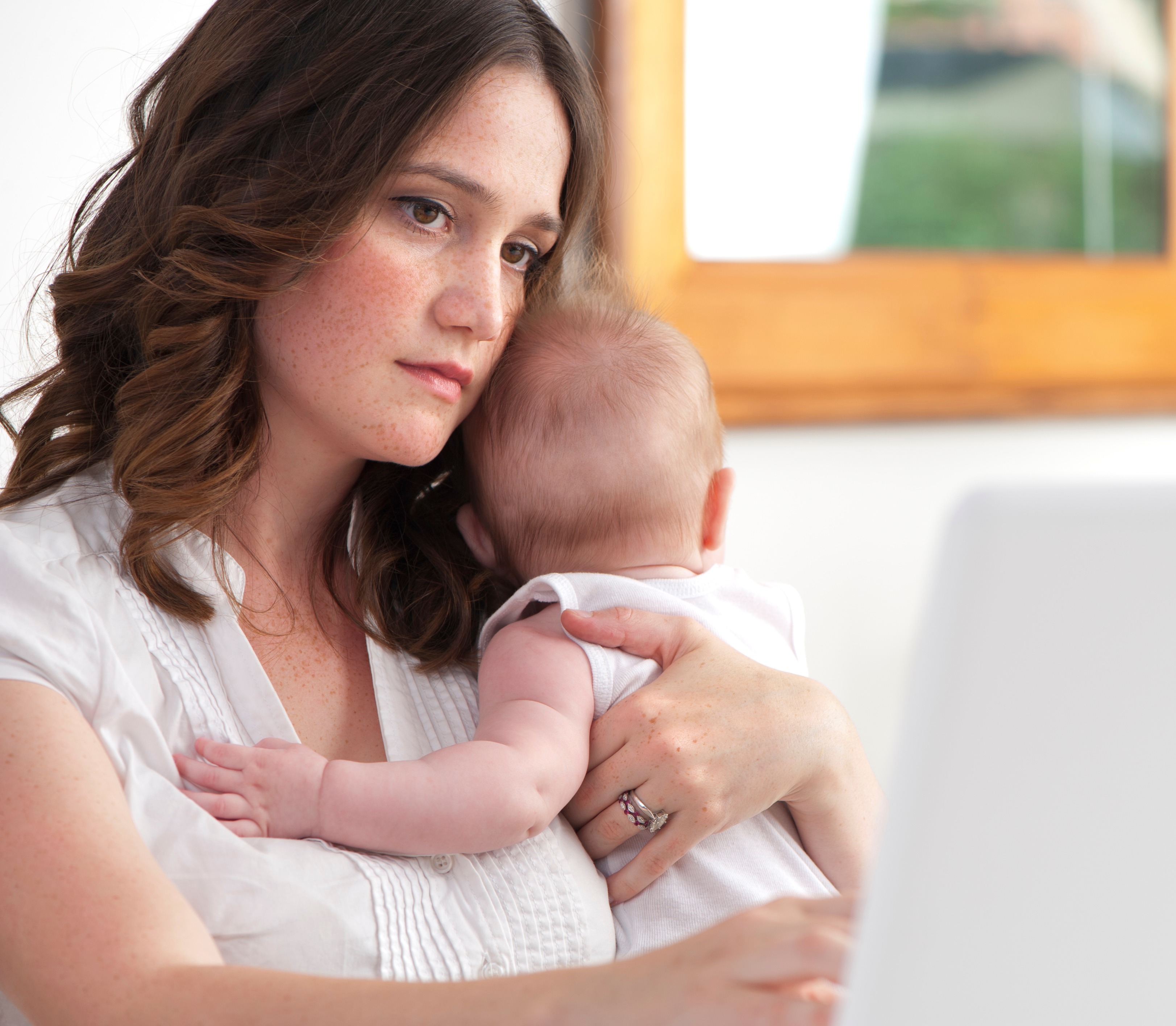 The anonymous woman, 32, is struggling to lose weight ‘mainly because of postpartum depression’ (stock image)Credit: Getty

The woman, who remains anonymous, took to Reddit for some advice after she snapped at her husband, who she refers to as 43-year-old Dave.

Dave started “oinking” at her while they ate dinner as a family and she yelled at him in front of the kids – something they agreed they’d never do.

In the post, the woman said: “I get next to no sleep attending to my children and most mornings, I can barely get out of bed, much less drive to the gym. It’s been a dark few months for me.” 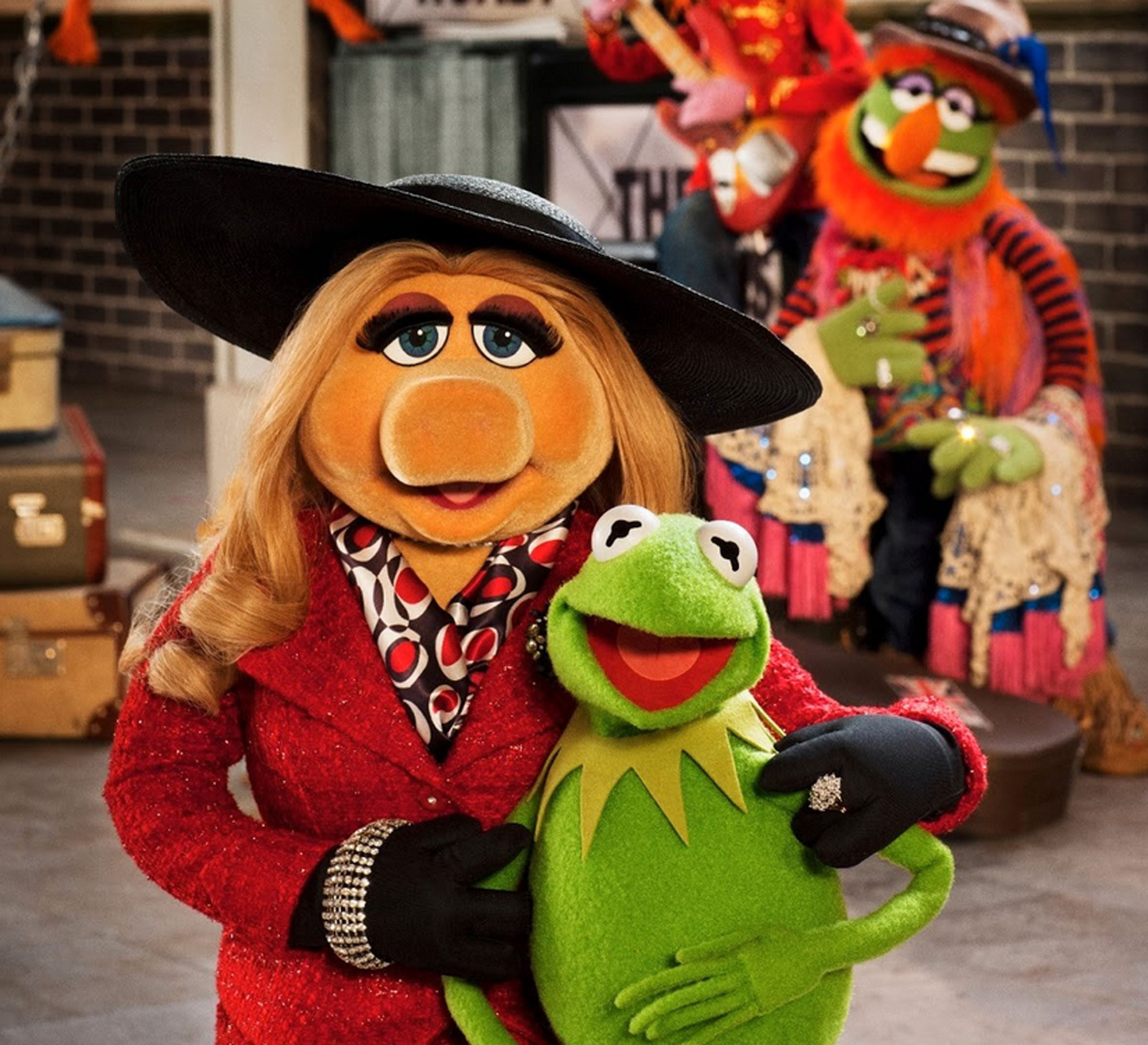 Her husband calls her Miss Piggy so it will ‘motivate’ her and her makes the kids say it tooCredit: Alamy

She explained that her husband took the “Biggest Loser approach” by calling her names, but she feels “undermined”.

He’s also gone so far as to urge friends and family to call her Miss Piggy also.

“I hate this nickname, but he says it’s supposed to motivate me to lose weight,” she wrote. “I think he really believes it’s going to help me, but I feel really undermined while parenting because of this nickname.”

The saddened mum received an overwhelming response in her favour, with many slamming her husband’s cruel and “abusive” behaviour.

One person wrote: “Wait, he says he’s calling you demeaning names because he loves you? 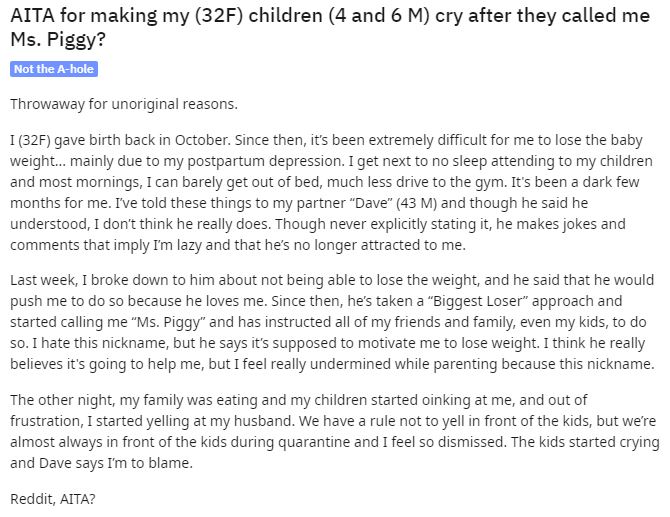 “No. When you love someone, you use terms of endearment. Honey, Sweetie, Darling. Not Miss Piggy.”

“This is abuse, full stop. And your children are learning it,” said another.

A third fumed: “He is also teaching his kids to be bullies and he is a bully. What a mean person.”

While a fourth wrote: “Teaching your children to humiliate you into losing weight is so beyond f***** up.”

Others urged the mum to stand up to her husband instead of dealing with the abuse.

One person said: “THIS It’s clear now why you’re depressed. It’s because you’re married to a huge AH. How dare he. Please stand up to him and let him know this abuse stops now. What an AH.”

And a second suggested: “Get therapy to deal with this and let a therapist tell this ahole of a husband how he’s being an ahole.”

Meanwhile, this fuming woman arrives home to confront her ‘cheating husband’ but is in stitches when she sees out what he’s REALLY up to.

Meanwhile this woman tracks down hot guy she saw on the train using his backpack – but her detective skills are dubbed ‘creepy’.