CHANCES are, you’re making some crucial mistakes each time you board a plane that could lower your chances of survival if it crashes.

Last week, a plane burst into flames near Houston, Texas and everyone onboard lived.

Often, people don’t manage to reach safety during a plane crash, because they aren’t aware of where the emergency exits are.Credit: Getty

The aircraft rolled through a fence and caught fire in a field while attempting to depart from Houston Executive Airport, but all passengers were able to “self-extricate.”

Two people were transported to the hospital, one with a minor back injury and another for respiratory issues.

According to aviation analyst Mary Schiavo, the reason so many passengers survived is down to the rules that force aircraft manufacturers to include a set number of doors.

She told CNN: “I’m going to give credit to both the Federal Aviation Administration… and the International Civil Aviation Organization, which put in place the evacuation rules you have to have enough doors and emergency exits on modern planes to get people out, and that has been documented to saving thousands of lives.”

But often, people don’t manage to reach safety during a plane crash, because they aren’t aware of where the emergency exits are.

Ms Schiavo says that passengers should check where the nearest doors are each time they find their seat on a plane.

She said: “When I board that plane, I note to myself and I say, ‘My nearest exits are three rows up and two rows back,’ or whatever they happen to be.I know where the exits are.

“I also always try to get myself as close as I can to an exit – if I’m in an aisle and my exit is not an exit row then I look for my pathway to get out.”

There are a number of other measures travellers can take to strengthen their chance of survival too.

Sun Online Travel previously reported the advice of Dave Inch, a captain of a Boeing 787 – planes used by the likes of American Airlines and Air Canada – for what to do if a plane is going down.

Speaking on the information sharing forum Quora, Mr Inch revealed his tips for improving your chances of survival.

First of all, passengers should secure their general person in preparation for a crash landing.

He said: “Remove everything sharp from your pockets,  loosen your belt and remove your tie or scarf and remove high heeled shoes.

“Take glasses off for landing so they don’t fly off and are available to help you see your way out if you need them.”

After the plane has landed, travellers should then resist the temptation to run for the exit and wait in their seat until instructed.

Mr Inch said: “Stay in your seat until instructed. Do not open a door or window exit without direct instructions from a flight attendant.

“If [it’s] a water landing, do not  inflate your life vest until you are at the doorway – if you inflate it and the aircraft fills with water, you will get trapped on the ceiling and not be able to swim underwater to get out.” 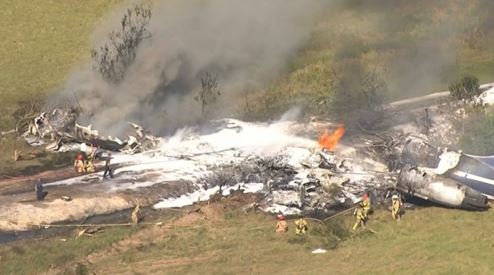 Last week, a plane burst into flames near Houston, Texas,  and everyone onboard livedCredit: CNN