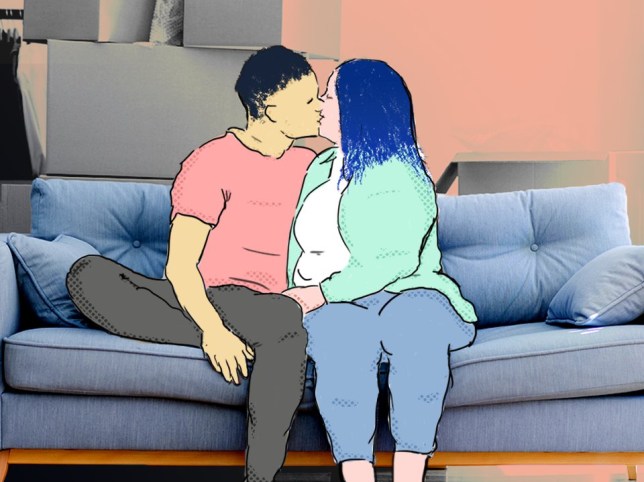 Charlotte is trying to get her groove back (Picture: Getty/Myles Goode)

For this week’s edition of How I Do It, we take a peek at a week in the sex and love life of Charlotte*, a 23-year-old waitress and part-time grad student living in the North East.

Charlotte has been in a relationship for four years, and when she first got together with her boyfriend, she had a much higher sex drive than he did and was nearly always the one to instigate sex.

That changed when, after going up a couple of dress sizes, her confidence waned, and she found she was becoming afraid of making the first move.

While on average they have sex once or twice a week these days, sometimes they can go weeks without.

However, the pandemic has led Charlotte to reassess her relationship with sex, since her boyfriend is home every night, meaning she doesn’t have time for any solo fun, so she doesn’t feel like she can turn down sex by claiming she’s ‘tired’.

Now she and her boyfriend have been actively trying to improve their sex life and get Charlotte’s old confidence back. Here’s how they’ve been getting on…

My boyfriend and I have been together for just over four years now, and though our relationship is steady, our sex life has been anything but.

When we met, I was a happy size 12 with a full fringe and a super-high sex-drive. Once we moved in together, however, the fringe grew out and regular sex was replaced by snack-filled evenings in front of the TV. It didn’t take long for me to put on weight, and now I am marking a year at size 16-18.

Our sex life took a serious dive last year because of this. Though I generally feel fine about my body, I really didn’t feel comfortable being naked in front of him. We’ve gone back to basics to find ways for me to feel more confident. I used to love trying wild new positions in all sorts of places, but now I prefer missionary in a dimly lit room.

Monday is my (online) university day, and I always end up doing my work until late. I get into bed after he’s already asleep and drift off soon after 2am.

Lockdown has been hard for us. In normal times we both operate on very different schedules; he works evenings whilst I mostly work during the day. Now we are both at home on furlough it sometimes can feel claustrophobic, so we try to give each other space a few days a week to avoid the petty arguments that come from being on top of each other constantly.

After a day apart (as far apart as you can be within one house) we reconvene to watch a film and have a cuddle.

The distance has paid off; he offers to give me a back massage. I accept, because I know that nine times out of ten he gets turned on by rubbing my back, and, because I’ve been feeling low, it’s been a week since we were last intimate.

As predicted, he rubs my back for about three minutes before instigating sex. We have a super intense quickie and fall asleep almost immediately after.

It’s just been one of those days. Neither of us slept well last night, so we spend most of the day snapping at each other before going to bed early.

We try not to ever leave things on a bad note before bed, so, even though it’s been a rubbish day, we have a quick cuddle before falling asleep.

After yesterday, I want to try and make today better. I feel most confident when I do my hair and makeup and dress up a bit. A general lack of motivation during lockdown has meant that this happens infrequently.

I fight the urge to opt for joggers and an oversized hoodie for the fourth time this week, and instead dress as if I am going out for lunch at a reasonably smart restaurant. I straighten my hair and put some eye makeup on, as well as a healthy dose of the perfume my boyfriend got me for Christmas.

I catch him giving me second glances all day, and he keeps slapping my bum when I pass him.

Even though we don’t end up having sex, he spends some time in bed kissing my neck and back. It’s these small intimate gestures that make me forget about any weight insecurities.

After making a nice dinner together, we go to bed early and spend the time chatting instead of putting Netflix straight on. I really want to have sex, but as usual feel scared of instigating in case he turns me down. Whatever he says, I always automatically assume it’s because he doesn’t find me attractive anymore.

It must have been all over my face, because within fifteen minutes we’re having sex. We start in missionary, but he looks like he’s enjoying it more than usual so I take the opportunity to go on top for the first time in months.

Afterwards he tells me how much he loves me being on top, both because he can see my body more clearly, but also because then he knows I’m totally in the moment and enjoying myself more.

I decide to sleep naked instead of wearing my fluffy pyjamas.

Saturday is errands day. We have both been shopping for family members who are shielding, so we don’t see each other until dinner time.

He tries to start touching me when we get into bed, but I’ve had a long day and just want to sleep. It’s still a little boost to know that he is interested in me despite my unwashed hair and lack of makeup, though.

Overall, I’m very happy and comfortable in our relationship. While our sex life could be considered ‘boring’ in comparison to what it used to be, what we have is a much greater understanding of each other’s needs, so that when we do actually have sex, it feels so much more intimate than it did when we first got together.

After a great day spent walking and making Sunday dinner, I fall asleep early in preparation for another busy Monday.