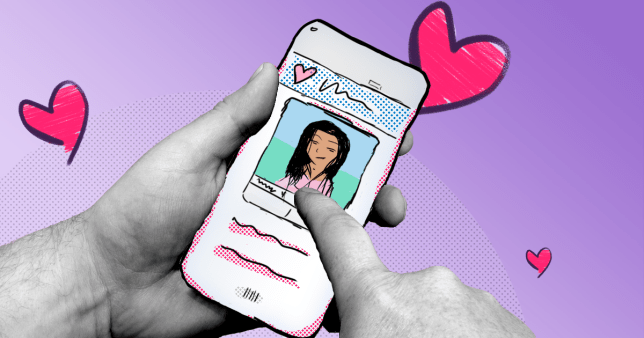 Dennis is casually virtually dating around, but adamant that he won’t break lockdown for anything, even sex (Picture: Myles Goode/ Getty)

For this week’s How I Do It, Dennis*, a 26-year-old man who works in HR, has given us a peek at what it’s like being single in a pandemic.

Dennis does not live alone and, although he is ‘chatting’ to someone new, he’s not currently bubbled up with anyone.

Having ended a previous bubble tryst five months ago, he’s been going through ‘withdrawal’ from sex ever since.

When he’s seeing someone, Dennis will typically have sex around five times a week on average, and he describes sex as important ‘both as a physical release and to have a concrete and tangible sense of closeness to someone’.

For him, sex plays a big part in how he shows affection, and even though his sex life right now leaves a lot to be desired, he’s happy with how his past sexual encounters have played out, and he knows what works for him.

Want to take a look at a week in the life of this locked-down singleton? Read on…

It starts as a pretty standard day. As a general rule I’ve been burying myself in work and keeping myself (frantically) busy.

Not just to distract myself from the fact I’m not having sex – although that plays a part – but also because I figure that if I can’t have an actual romantic life, I may as well have money.

I’m ‘seeing’ someone at the moment who’s in a similar position to me. Let’s call her Rosa Diaz.

It’s super new, but it’s been a while since she’s had sex too, and it’s nice to have some moral support on that. Like a two-person support group, but with more nudes.

It’s weird; I don’t know if we’d actually get together if the whole world wasn’t a smoking hot mess right now. I think we both feel it’s definitely nice to have that sort of attention, romantic style.

She taught me an online game, and we played together spontaneously before heading to (separate) bed(s).

We did a little flirting over messenger, which was excellent. I’m sad to admit that I kind of needed the attention. She uses a sticker of a dog in a sombrero saying ‘dios mio’ quite a lot.

We’re always told that too much of a good thing is bad, but now hugs can kill?! This is a new extreme.

I did some swiping on Hinge later on. I set my distance to one mile just to see if I could get some face-to-face interaction with someone, anyone.

I saw a surprising number of people from my primary school and thought better of it.

I woke up not feeling like I’d been hit by a truck. That’s been pretty rare over lockdown.

Got on with work, had scones for breakfast, yelled at my computer screen about my co-workers – all the good stuff.

I haven’t been thinking about sex all day. The idea of an office Karen mismanaging spreadsheets puts me right off.

Today’s definitely been a little different. I may be being dramatic, but if I don’t f**k someone right now I may die.

I calmed down a bit and had breakfast. I looked up ‘lack of real sex’, and WebMD says I’m probably going to live. I am being dramatic, and nobody’s ever died of that, but at the same time, I definitely don’t want to be the first.

Imagine having that on your gravestone.

I took one or two (hundred) exceptionally cheeky pictures in preparation for Rosa’s birthday tomorrow.

I’m not sure how narcissistic this makes me sound, but I spent all day thinking about sending Rosa her birthday pic. I can’t remember thinking about much else.

I played out a fantasy involving her in my head that made me pretty restless, so I let myself enjoy that – physically, if you know what I mean.

Later on we had cocktails and watched a movie over Skype. The dress code was ‘wear a tie’ which had pretty different results.

I wore a casual baggy shirt with an awful bright yellow number hanging from the front. She settled on a full Ravenclaw outfit. I felt a little like I was at a job interview in some weird dream, but it was fun.

Halfway through the film (Eurovision Song Contest: The Story of Fire Saga), she grabbed an ice cream as a snack.

I’m glad she didn’t test me on the second half of the movie because I literally could not look away from her licking that thing.

We flirted a little, and the picture I ended up sending her got high marks, which was pretty satisfying. The picture she sent in return wearing only her tie was… pretty special.

I got propositioned during the day and had a brief fantasy of getting in a cab and just risking it.

But I know that for every time anyone just has a ‘one off’, we put someone in danger. That’s someone’s mum, or grandad, or best friend that could die.

I have friends working the front lines in A&E, and the thought of them walking around in the freezing cold trying to treat patients in the ambulance queues keeps me from being selfish.