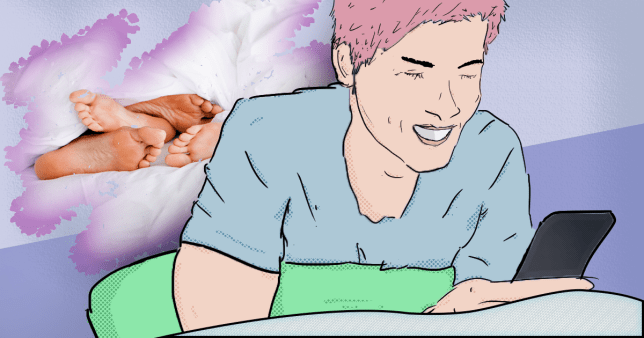 Ben and his girlfriend have to navigate intimacy from afar (Picture: Getty/Myles Goode)

Ben*, a 27-year-old student based in Brighton, is one of many up and down the country who’s been forced to lockdown away from his partner.

Ben and his girlfriend Andrea* talk openly about their fantasies about group sex and adventures outdoors, but most of all they just miss each other.

Other than that, he’s very happy with his sex life and the way the relationship was going, saying sex with Andrea is ‘the most fun and connecting’ he’s ever had.

He has some experience with the ‘freakier’ side of things, but in hindsight he feels like it was more ‘performative and cold’ back then.

Now he describes himself as ‘beyond content’, and, while he and his girlfriend do indulge in the non-vanilla stuff when they’re together, he says he could have the same sex with Andrea the same way every time for the rest of his life and he’d still be happy.

I wake naturally, far earlier than I would care for. Still stiff as a flagpole after last night was wrought with unrelenting erections.

There’s a lingering memory of a sex dream floating around my foggy head, so I follow that for a while, and I paw lazily at myself with no real intention of the act going anywhere. Just a little bit of feel-good.

As the day goes on, last night’s dream becomes a daydream.

After exchanging the usual ‘good morning’ texts with Andrea, I hover my thumbs over the keyboard, debating whether to share some details of the dream.

We both experience vivid dreams, so this is something we do fairly often. However, I think better of it and decide to leave it for now.

Andrea is also studying and is a far more diligent student than I am. It can feel like I get the timing wrong or become a bit of a pest when I do send a text to see if she’s picking up what I’m putting down.

We both like to talk about these scenes but agree we’re far too jealous to involve others for real. That doesn’t stop the thought being a huge turn-on for us both.

It’s something we love to simulate with toys in the bedroom.

We both have things to do today, but we check in often and tease each other to keep the tension through the day.

Our sexting went well into last night, with an over-four-hour-long sext-athon.

We carried on some more about fantasies, sending each other nudes and explicit videos. We spoke about what the first thing we want to do to each other would be when we’re next in the same room.

I think we’re both in for a treat when that does finally come around.

It doesn’t take long for us both to be clawing at the walls when we’re apart and our reunions have always required several trips to the bathroom, refilling the two-litre water bottle we keep at the bedside.

When I hop out of bed there’s some serious sensitivity going on and the friction burn is real.

I wish I wore loose boxers on days like this. Still, I waddle on.

While out for a walk to clear my head after what has been a hectic day, I open my messages and without warning I have a screen full of NSFW imagery with the caption ‘wish you were here too…’

Naturally, my heart skips. I stop in my tracks and I pull to the side of the street to reply. Andrea wants my undivided attention and active engagement.

I explain my predicament, but she doesn’t care and becomes incredibly demanding.

After a few paces I dart down a quiet alleyway that runs behind a row of houses.

With nobody about, I expose myself below the belt and with a quick adjustment for angles, I snap a photo.

Unfortunately, I then look up and see a 30-something couple are facing me, close enough that they have without a doubt seen.

They whisper as the distance between us shortens. I’m doing everything to avoid eye contact and simultaneously gauge them. We pass and in unison they exclaim ‘nice!’ over their shoulders, giggling.

There’s a tiny labyrinth of connected alleys to my right which hook into a dead end. I tuck myself into the most concealed corner, and we finish this spontaneous session together.

It’s all quiet on the Western front today. I think we’ve both exhausted ourselves, and it’s not uncommon that we go a bit quiet after a few days of intense back and forth.

This is fine apart from the fact that when we are together we would fill the silence with acts and touches of affection.

The aftercare is so important in any ongoing sexual relationship and without demonstrations of love, it can be really difficult to go from libidinous displays of sex to wanting a hug and ice cream on the sofa and there’s nothing you can do to synthesise that.

With the physical disconnect, it becomes so apparent that sex can be done so easily remotely, but intimacy not so much. It’s the latter that’s really missing when we aren’t together.

Often I think the commitment to keeping a sex life going when you’re apart is an attempt to get back that feel-good feeling that’s missing when you can’t hold hands, hug and laugh together.

Today we had regular little check-ins, and we’re both feeling the distance.

There’s not much more to be said. We just miss each other.

All week I’ve been dealing with a house move I didn’t plan on making this year, but the pandemic has made that decision for me.

While it’s a major upheaval for me and stressing me out for all the reasons you’d expect an unplanned relocation during a university degree would, it does mean that I’ll be closer to Andrea.

We’re both incredibly pleased that we’ll be closing the gap between one another, and will be close enough to take advantage of the restriction changes when they come.

Like I said, it’s the closeness and intimacy that can’t be replicated, and is what we both need from each other. Now we’ll at least be able to get a little of that intimacy back before lockdown lifts fully.

Then, Covid permitting, I’ll be right round knocking her door down – assuming she doesn’t get to mine first.