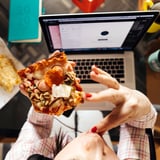 Between plant milk, pre- and probiotics, and gluten-free alternatives, I think (and talk!) about digestive health more than ever before.

I know that digestion is how the body breaks down food and turns it into nutrients, but that’s about the extent of my knowledge. Where these digestive-health trends and buzzwords come into play is beyond me.

According to Dr. Ugo Iroku, MD, a gastroenterologist with The Endoscopy Center of New York, medications and dietary supplements can be excellent where appropriate, but understanding the digestive system can help you question how exactly a proposed treatment plan is supposed to help you.

“A greater understanding of the digestive process will lead to better discussions and buy-in with an appropriate treatment plan.”

Where the average person’s digestive process takes 72 hours, Dr. Iroku’s step-by-step explainer should only take a few minutes to read.

5 Tips For Speeding Up Digestion – Naturally

“This stage of digestion begins before the turkey leg even makes its way into our mouths. The mere anticipation of food starts saliva production, and with it enzymes such as amylase, which breaks down starches,” Dr. Iroku said.

Ingestion also includes breaking down food by chewing, ultimately converting each bite of food into bolus (a mass of chewed food), he added.

If you’re experiencing nausea from stomach inflammation (aka gastritis) or a stomach ulcer, you may be experiencing a decreased appetite, too. Dr. Iroku said this is an issue that should be addressed at the ingestion phase.

Next, the tongue, pharyngeal muscles at the back of our throats, and the esophagus’s wave-like peristalsis movement propel the bolus into the stomach, Dr. Iroku explained.

Propulsion is the stage where acid reflux occurs – resultant irritation can also drop the appetite, he added.

Although physical food breakdown technically begins with chewing, Dr. Iroku said it continues throughout the mechanical stage, where stomach muscles break food down into smaller pieces.

“When we skip chewing due to our eagerness to eat a lot, that can lead to larger and tougher boluses of food making their way to our stomach and causing quite a bit of indigestion.”

According to Dr. Iroku, the chemical breakdown of enzymes starts with saliva. It continues in the stomach with acid and enzyme production, ultimately converting the swallowed food bolus into a semifluid pulp called chyme.

“This chyme then enters the small intestine, which, with the production of bile, breaks down fatty foods into its microscopic components.”

If you are lactose intolerant, the lactase enzyme (that breaks down dairy!) is unavailable; this leaves the bulk of the digestive breakdown in the hands of our gut bacteria, Dr. Iroku said.

“Gut bacteria are messy eaters, unfortunately, and produce much more gassiness and bloating as they digest foods, leaving us with flatulence, abdominal cramps, and unhappy roommates.”

“This process also began in a small degree in the mouth, but is primarily occurring in the small intestine, as the nutrients are derived from the chyme as it makes its way to the colon.”

Celiac disease – where gluten prevents the small intestine from carrying out its role in absorbing nutrients properly – is a well-known problem associated with absorption.

Whatever’s left to be digested ends up in the colon, where additional water is removed, ultimately converting it to stool, which then exits the body, Dr. Iroku said.

Constipation results from a slow-moving gut that can cause pain, bloating, nausea, and heartburn, he added.