Would you dare spread this on your toast? (Picture: Heinz/Getty)

Brace yourselves for some food news that may shock, horrify, and nauseate you.

Heinz has teamed up with festive favourite Terry’s Chocolate Orange to bring something new – and potentially monstrous – into the world.

We repeat: this is mayo that tastes like a chocolate orange.

Why? Because clearly these people are not a God-fearing bunch.

Heinz has assured us that this is not a very early April Fools’ Day joke, and that they really have made such a bizarre mashup as mayo and chocolate.

And they say it’s actually delicious.

The goop is made by blending mayonnaise with melted chocolate orange segments, crème patissière, orange oil. 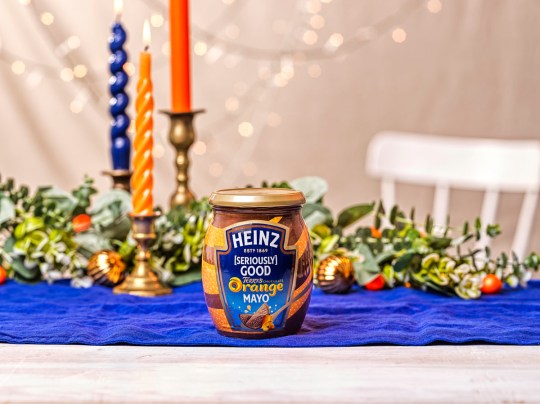 The result, they say, is ‘a smooth and delicious spread’ that they recommend adding to festive desserts or spreading onto brioche, toast, crumpets, or pancakes.

The team at Heinz even claim that you might want to eat the stuff straight out the jar, and that you’ll struggle to share it with friends and family, because it’s just that good.

To build up some extra hype for this bizarre product, Heinz and Terry’s are only offering 200 jars of the limited-edition creation.

You won’t be able to pick it up in your local supermarket, but can be in with a chance of winning a jar by heading to the Heinz competition page and their social media.

The contest will run from today (December 1) until December 13, so get your skates on if you want to be in with a chance.

If you don’t win, we guess you could make your own by melting down some chocolate orange segments and mixing in with mayo?

Laure Gentil, marketing controller at Terry’s Chocolate Orange said: ‘At Terry’s we are proud to offer a large variety of formats and flavours to be eaten all-year round when it comes to our delicious chocolate orange: from the iconic orange ball that we all know and love, to our sharing bags and handy bars to eat on the go… and now Heinz [Seriously] Good Terry’s Chocolate Orange Mayo!

‘We always say that you can never get bored with Terry’s Chocolate Orange, and our new collaboration with Heinz epitomises this.

‘Since Terry’s Chocolate Orange launch in 1932 we have never stopped innovating, growing, and launching new formats and flavours to delight our loyal fans, and we are proud to be continuing this this Christmas with our mayo mash up, which works perfectly as a delicious spread.’

We might just keep our mayonnaise and chocolate separate.